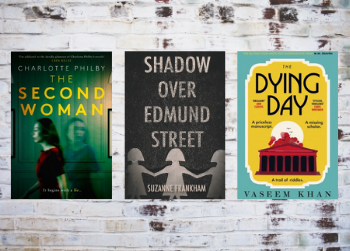 In this month’s recently acquired crime, mystery, and detective novels we have a new work from James Ellroy, nicknamed the “Demon dog of American crime fiction.”

James Ellroy is one of the most accomplished, celebrated, and acclaimed modern crime writers around, known for his moral but often relentlessly pessimistic and complex style, which recently has incorporated his own tele grammatic prose, where he often omits connecting words leaving only short, staccato sentences, incorporating in the process his own version of drug vernacular, profanity, cop talk and jazz slang.

His own dark and very troubled past has definitely had a huge influence on Ellroy himself, both as an individual and his writing. His mother was brutally murdered when he was only ten and Ellroy struggled to come to terms with this immense tragedy (which he would eventually write about in his memoir My Dark Places). Dropping out of school, he abused both alcohol and drugs and suffered from intense clinical depression. Often homeless, he turned to petty crime, including shoplifting and housebreaking, eventually spending time in prison. After suffering from pneumonia which caused an abscess on his lung, he quit drinking. He then took up golf caddying which allowed him the time to pursue writing. His first detective book Brown’s Requiem is based partially around his caddying experiences. He quickly became a cult favourite and later with L.A. Quartet series of books both critical and commercial success would follow.  Widespread Panic is his most recent work. You can read further details of Widespread Panic along with our other selected Crime and Mystery titles below:

Widespread panic : a novel / Ellroy, James
“Freddy Otash is the man in the know and the man to know in Tinseltown. He operates with two simple rules–he’ll do anything but murder, and he’ll never work with commies. Freddy is a corrupt L.A. cop on the skids. He executed a cop killer named Horvath and it gores him. So Captain “Whiskey” Bill Parker cans him. Now, Freddy dons an array of new hats–sleazoid private eye, shakedown artist, matchmaker for Rock Hudson, pimp for President John F. Kennedy–and, most notably–the lead tipster and head strongarm goon for Confidential magazine.  In Widespread Panic we traverse the depths of ’50s L.A. ” (Adapted from Catalogue)

The second woman / Philby, Charlotte
“Artemis leaves the remote Greek island she grew up on to start a shiny new life in 1990s London with her British husband, a successful entrepreneur. Finally, she has escaped the ghosts of her past. Until she is found hanging from the stairs of her beautiful family home. Two decades later, the apparent suicide of an heiress uncannily mirrors Artemis’ mysterious death. And when the ensuing investigation uncovers links to a criminal cartel, National Crime Agency officer Madeleine Farrow begins to pull apart the web of deceit surrounding the two women.” (Adapted from Catalogue)

The doll / Yrsa Sigurdardottir
“It was meant to be a quiet family fishing trip, a chance for mother and daughter to talk. But it changes the course of their lives forever. They catch nothing except a broken doll that gets tangled in the net. After years in the ocean, the doll is a terrifying sight and the mother’s first instinct is to throw it back, but she relents when her daughter pleads to keep it. This simple act of kindness proves fatal. That evening, the mother posts a picture of the doll on social media. By the morning, she is dead and the doll has disappeared….” (Adapted from Catalogue)

Farewell my herring / Tyler, L. C
“Ethelred Tressider and his agent Elsie Thirkettle have been invited to lecture on a creative writing course at Fell Hall, a remote location in the heart of ragged countryside that even sheep are keen to shun. While Ethelred’s success as a writer is distinctly average, Elsie sees this as an opportunity to scout for new, hopefully more lucrative, talent. But heavy snow falls overnight, trapping those early arrivals inside, and tensions are quick to emerge between the assembled group. When one of their number goes missing, Ethelred leads a search party and makes a gruesome discovery. With no phone signal and no hope of summoning the police, can Ethelred and Elsie identify the killer among them before one of them is next?” (Adapted from Catalogue)

The truth-seeker’s wife / Granger, Ann
“It is spring 1871 when Lizzie Ross accompanies her formidable Aunt Parry on a restorative trip to the south coast. Lizzie’s husband, Ben, is kept busy at Scotland Yard and urges his wife to stay out of harm’s way. But when Lizzie and her aunt are invited to dine with other guests at the home of wealthy landowner Sir Henry Meager, and he is found shot dead in his bed the next morning, no one feels safe. On Lizzie’s last visit to the New Forest, another gruesome murder took place, and the superstitious locals now see her as a bad omen. And once Ben arrives to help with the investigation, he and Lizzie must work together to expose  dark secrets and a ruthless killer intent on revenge.” (Adapted from Catalogue)

Sleepless / Hausmann, Romy
“It’s been years since Nadja Kulka was convicted of a cruel crime. After being released from prison, she’s wanted nothing more than to live a normal life: nice flat, steady job, even a few friends. But when one of those friends, Laura von Hoven–free-spirited beauty and wife of Nadja’s boss–kills her lover and begs Nadja for her help, Nadja can’t seem to refuse. The two women make for a remote house in the woods, the perfect place to bury a body. But their plan quickly falls apart and Nadja finds herself outplayed, a pawn in a bizarre game in which she is both the perfect victim and the perfect murderer..”(Adapted from Catalogue)

Shadow over Edmund Street / Frankham, Suzanne
“Raised in a poverty-scarred part of Auckland, Edwina is a battler. Life revolves around the church and her mundane job unpacking vegetables. Meanwhile, a new generation has gentrified her suburb. After winning a gym membership, she loses weight, gets a new hairstyle, clothes, job – and makes a new friend, Rose. Edwina’s life is brutally taken, a swift and silent killer leaving no clues. Her murder seems unsolvable until a casual comment sends Inspector Alex Cameron and his seasoned team trawling through Edwina’s childhood. Can they uncover the link in time to save the next victim? Alex Cameron must unravel the shadow hanging over Edmund Street. Everyone and no one is a suspect, until…” (Adapted from Catalogue)

The dying day / Khan, Vaseem
“For over a century, one of the world’s great treasures, a six-hundred-year-old copy of Dante’s The Divine Comedy, has been safely housed at Bombay’s Asiatic Society. But when it vanishes, together with the man charged with its care, British scholar and war hero, John Healy, the case lands on Inspector Persis Wadia’s desk. Uncovering a series of complex riddles written in verse, Persis – together with English forensic scientist Archie Blackfinch – is soon on the trail. But then they discover the first body. As the death toll mounts it becomes evident that someone else is also pursuing this priceless artefact and will stop at nothing to possess it…” (Adapted from Catalogue)