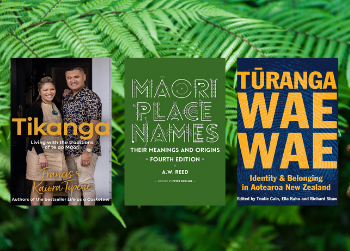 This book is about walking as a form of knowing. Armed with Ngāi Tahu’s traditional oral maps and modern satellite atlas, I crossed the Southern Alps more than a dozen times, trying to understand how our forebears saw the land. What did it mean to define your identity by sacred mountains, or actually see them as ancestors, turned to stone?

Kia ora e te whānau, we hope that you’re all doing well – especially as we start to open up our mirumiru (bubbles) again. Although our whare pukapuka (libraries) are open at Level 2, we’re taking precautions, and we still have heaps of eBooks (and audiobooks) that you can access through Overdrive and Borrowbox; today we have a selection of eBooks for you.

We’re sneakily including the revised fourth edition of Māori Place Names (added to our eBook collection at the end of last year and published in paperback in 2016), because Te Wiki o Te Reo Māori is starting on Monday the 13th! Learning the ingoa (name) for where you live and how to pronounce it properly is a great way to build confidence in speaking Te Reo ― as well as for learning about the history of a place. Languages are always entwined with culture, and if you’d like to learn about Māori values and how to incorporate them into daily life, we reckon a great place to start will be with Tikanga: living with the traditions of te ao Māori, by Francis and Kaiora Tipene.

As well as heralding the start of Mahuru Māori (on the 7th i tēnei tau), September is also Bee Aware Month ― a time for raising awareness about Aotearoa’s ngaro huruhuru (native bees) and pī mīere (honey bees), and the critical roles they play in the ecosystem. The pukapuka Healthy bee, sick bee focuses on the introduced honey bee and their wellbeing, including sections on viruses, pesticides, pathogens and the future of bee health.

We’re really excited to read Nic Low’s beautiful pukapuka, Uprising: walking the Southern Alps of New Zealand. Low’s journeys across Kā Tiritiri o te Moana (the Southern Alps) brings him closer to both his Ngāi Tahu and Pākehā heritage, and he wonders what if “New Zealand’s walking culture had developed with Māori still owning the land? What kind of hybrid traditions might have emerged if Kemp’s Deed had been honoured, the mahika kai preserved?” If you’re stuck on the waitlist for this one, you can always read an extract from Uprising over on E-Tangata.

Some other pukapuka to check out are Tūrangawaewae: identity & belonging in Aotearoa New Zealand, an award winning collection of essays that is now available as an eBook; and Te Papa to Berlin: the making of two museums ― for all you wonderful GLAM sector nerds out there (GLAM = galleries, libraries, archives and museums). Māori place names : their meanings and origins / Reed, A. W. (eBook)
“Pronounce and understand Maori place names with the new fourth edition of A.W. Reed’s classic guide to meanings and origins of names across New Zealand. From Ahaura to Whitianga, this handily sized book is the definitive guide to the most common and notable Maori names on our land. Why do Whangarei, Tauranga, Motueka and Timaru have the names they do? Why all the fuss about the spelling of Whanganui and Rimutaka? What are the original names for Auckland, Hamilton, Wellington, Christchurch and Dunedin?” (Catalogue) Tikanga : living with the traditions of te ao Māori / Tipene, Francis and Kaiora (eBook)
“Following on from their bestseller, Life as a Casketeer, Francis and Kaiora Tipene share how they bring the values of tikanga Māori into day-to-day living, what they know about whānau, mahi and manaakitanga, and how they live a life rich with the concepts of te ao Māori. Known for their warm hearts, grace and humour, the stars of the wildly popular series The Casketeers show how tikanga shapes their lives as they juggle five sons, three businesses and a television show.” (Adapted from Catalogue) Healthy bee, sick bee : the influence of parasites, pathogens, predators and pesticides on honey bees / Lester, Phil (eBook)
“Entomologist Phil Lester explores the wonderfully complex and sometimes brutally efficient life history of honey bees, and the problems they face in New Zealand and around the globe. What causes a beehive to collapse? Are pesticides as big a problem as they appear? What can we do to improve the health of our honey bees? With intelligence, insight and jokes, Healthy Bee, Sick Bee tells the story of this much-loved little insect and offers new ways of thinking about their future survival.” (Adapted from Catalogue) Uprising : walking the Southern Alps of New Zealand / Low, Nic (eBook)
“Raised in the shadow of New Zealand’s Southern Alps, Nic Low grew up on mountain stories from his family’s European side. Years later, a vision of the Alps in a bank of storm clouds sparked a decade-long obsession with comprehending how his Māori ancestors knew that same terrain. Kā Tiritiri-o-te-moana, the Alps, form the backbone of Ngāi Tahu’s territory; far from being virgin wilderness, the area was named and owned long before Europeans arrived and the struggle for control of the land began.” (Adapted from Catalogue) Tūrangawaewae : identity & belonging in Aotearoa New Zealand / ed. Cain, Trudie and Ella Kahu (eBook)
“What is a New Zealander? What does it mean to be a citizen of or a resident in this country? How do we understand what makes New Zealand complex, and unique? And what creates a sense of belonging and identity, both here and in the world? Written for university students, this book will appeal to anyone interested in where we have come from and where we are headed. It’s a book for active participants in Aotearoa New Zealand and in global society.” (Adapted from Catalogue) Te Papa to Berlin : the making of two museums / Gorbey, Ken (eBook)
“For 15 years Ken Gorbey was involved with developing and realising the revolutionary cultural concept that became Te Papa Tongarewa. Then in 1999 he was headhunted by W. Michael Blumenthal to salvage the Jewish Museum Berlin. This book is a lively insider perspective about cultural identity and nation building, about how museums can act as healing social instruments by reconciling dark and difficult histories, and about major shifts in museum thinking and practice.” (Adapted from Catalogue)