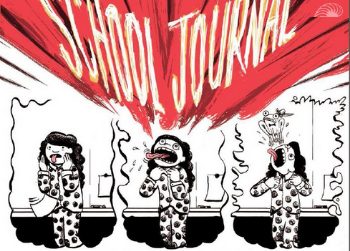 While we wait for a new date for ComicFest 2021, meet Austin Milne in this “5 minutes with” interview.

Austin Milne has wanted to be a cartoonist since deciding being a dragonologist wasn’t realistic. When he was 12 he tried writing a comic strip about his life but decided to stop because he was too close to the subject matter, instead he made comics about an anthropomorphic emu. Now aged 23, he has had a few comics and is working on a graphic novel about 12-year olds.

From age 8 I would go to my friend’s house and read all his dad’s Peanuts books. He and his sister made their own comics, and so did I. They soon stopped but I had found something I enjoyed. I remember thinking while working on a Tintin rip off: ‘this is like reading but better cause I can make anything happen that I want’.

I’m still working out the perfect way to run a day. I’m most productive drawing early in the morning, when I go for at least 2 walks a day and eat lots of vegetables.
I write best at cafes or on trains, and draw best somewhere warm and quiet.

I’ve been working on a graphic novel for middle readers for the last 2 years to be published by Annual Ink.

I write a schedule for the day in my diary and some notes of what I did yesterday, if I don’t feel like writing, I collage train tickets, drawings, and printed ephemera I chance upon. It would be to draw a daily newspaper comic strip, like a really big one in a broadsheet newspaper. And while I’m dreaming I would like it to be full page and in colour, and l would like to be editor of an 8 page comics section in the newspaper and commision and pay New Zealand cartoonists to make strips for it. and it would be paid for by big business sponsoring it, but as part of the deal the businesses would have to ditch identical corporate branding and have each of their stores designed by a cartoonist complete with strange cartoon mascots. And then the newspaper would just become all comics, and it would save newspapers and it would save New Zealand towns from looking boring and it would save comic strips and then it would take off all over the world and become more popular than music.

I will do my best to cosplay as Gissele Clarkson’s drawing of me.