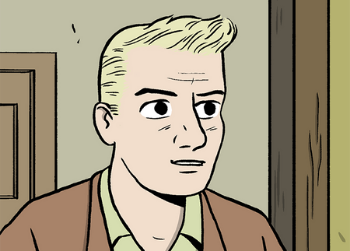 ComicFest 2022 is Saturday 7 May — and this year will be fully online! Find the full programme on our ComicFest website. ComicFest is a joint venture between Wellington City Libraries and the National Library of New Zealand. His comics have featured in Faction Comics (2012–2014), From Earth’s End: the Best of New Zealand Comics (Random House, 2013), High Water, a climate change anthology (2015), and in a collection of his comic works Perplexing Stories (Eel Noir, 2015). His story Holiday featured in Gecko Press’s Annual in 2016, and another, Docking Season appears in Annual 2 in 2017. His graphic novel The Inkberg Enigma was published by Gecko Press in 2020.

When I was four years old I got Hergé’s The Black Island and The Shooting Star for my birthday. They remain two of my favourite Tintin books, and set me on a lifelong love of adventure comics. Superman, Batman and Marvel comics were next. This was in the 1970s — and it’s funny to see these same storylines turn up in the movies today. I haven’t really kept in touch with superhero comics since then, but still love kids adventure comics — made today and as far back as the 1930s.

At the moment I’m teaching film at Massey University in Wellington, overusing Third Year students’ own film and game projects. So I’m either meeting with students, reading their work … or keeping my own ‘research’ going — which at the moment is writing a feature film script, exploring animation in Blender and Unreal Engine and editing a film I shot for a friend earlier this year.

My first graphic novel The Inkberg Enigma was out last year – after several years of Workington it. I’ll definitely get back to comics soon … but I both need to earn some (not comics) money, and keep things like film — which I’m still passionate about — moving. Napping / thinking / lying around is a super important aspect for me — particularly those few moments when you’re halfway between sleep and awake. I really do find I make huge creative progress on ideas when my conscious brain is disengaged and the creative brain is floating free … Then I just need to remember it all to write to down when I wake up!

Artistically my biggest influences were / are Hergé, Yves Chaland — who was a young French cartoonist, himself influenced by Hergé, who tragically killed in a car accident at a young age, American Darwyn Cooke — who died much too young too, Milton Caniff and Frank Robbins — greats from the golden age of newspaper adventure comics.

My favourite NZ comics creators include Dylan Horrocks — who was hugely supportive to me (and so many others) when I started making comics; Roger Langridge – whose work is supernaturally great; Sharon Murdoch, who has such an effortlessly light touch with thoughtful content; Giselle Clarkson, whose playful style I just love.

My dream project would be a serialised adventure story — that unrolled at a strip a day (or maybe a page a week) in the newspaper — if such thing still existed!