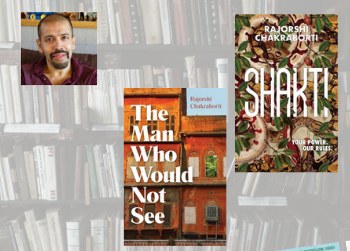 Rajorshi Chakraborti is one of the most interesting and exciting voices in New Zealand literature at the moment; a superb novelist, essayist, and short story writer. Rajorshi grew up in Calcutta and Mumbai and now lives in New Zealand.

He is the author of six novels and his novel The Man Who Would Not See was longlisted for the 2019 Ockham New Zealand Book Awards. Set in Calcutta, it is the story of a family split apart by a very small error that moves ahead thirty years, so a possible apparent reconciliation, but is it?

His latest novel Shakti is a supernatural magical realist mystery thriller set in India, that delves into the murky and dark waters of modern Indian politics in a carefully chosen, considered  and unique fashion.

You can also borrow his books:

Shakti / Chakraborti, Rajorshi
“Amid a climate of right-wing, nationalist politics, three Indian women find themselves wielding powers that match their wildest dreams. There is one catch: they come with a Faustian price.” (Adapted from Catalogue)

The man who would not see / Chakraborti, Rajorshi
“As children in Calcutta, Ashim and Abhay made a small mistake that split their family forever. Thirty years later, Ashim has re-entered his brother’s life, with blame and retribution on his mind. It seems nothing short of smashing Abhay’s happy home will make good the damage from the past. At least, this is what Abhay and his wife Lena are certain is happening. A brother has travelled all the way from small-town India to New Zealand bearing ancient – and false – grudges, and with the implacable objective of blowing up every part of his younger brother’s life. Reconciliation was just a Trojan horse. But is Ashim really the villain he appears to be, or is there a method to his havoc?” (Catalogue)

Shadow play / Chakraborti, Rajorshi
“An international conspiracy thriller in the vein of The Parallax View— a Salman Rushdie-esque figure uses his latest novel to explain his own disappearance after a journalist’s murder   Raj Chakraborti, internationally renowned novelist and commentator, has disappeared from public view. What’s worse, the police want to question him about the murder of a young journalist. Raj claims to explain everything in chapters from his latest work of fiction about a serial-killer-turned-hired-assassin. Is Raj right to believe that he is being hunted, or is it his past that has finally borne down to haunt him?” (Catalogue)