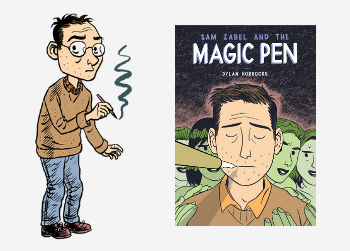 Dylan Horrocks has been writing and drawing comics, graphic novels, cartoons, and prose fiction for more than 30 years, including Hicksville, Sam Zabel & the Magic Pen, Batgirl, and Hunter: the Age of Magic. His work has been published around the world in various languages and won the Eisner Award and the Sir Julius Vogel award, among others. He currently lives in Wellington, where he teaches comics and visual narrative at the Victoria University of Wellington School of Design Innovation and is drawing a graphic novel about fantasy role-playing games.

I’ve loved comics for as long as I can remember (partly thanks to my Dad, who kept me well supplied with a range of old classics and obscure contemporary stuff – from Carl Barks and Tintin to Edward Gorey and Zap comics). I grew up wanting to write stories and draw pictures, so comics just seemed like a natural form.

I currently teach comics and visual narrative at the Victoria University of Wellington School of Design Innovation (phew!), so my days are often busy with classes and post-graduate supervision. When I can, I’m writing or drawing (in notebooks or on the computer). I relax with a book or TV (I love weird old movies from the 1930s-50s). And about once a week, I spend the evening playing role-playing games (like Dungeons & Dragons) with friends.

I’m working on a bunch of projects, but who knows when they’ll see the light of day? The ones I’m most focused on at the moment all come from my life-long obsession with role-playing games (not just D&D but also innovative indie games, etc). I’ve been researching the history of the form and exploring different ways of thinking about story and narrative inspired by gaming. I’m even designing my own RPG rules. I’ve also self-published two issues of a little side-project, a series of zines called Darkest Dungeons. It’s inspired by an infamous 1985 religious comic about how D&D is a Satanic cult, but I’m retelling their deliciously lurid story with added context and new perspectives. It’s way too much fun! One thing I do is alternate between working on fancy paper, in a cheap notebook, and on the computer. Whenever I get stuck, I shift to a different medium and often that gets me going again. It’s like each format uses a different part of my brain. Recently I’ve also been drawing on an iPad Pro (in Clip Studio). I still love drawing on paper, but it’s interesting learning a new set of tools.

There are so many! Hergé’s Tintin is a huge influence on my work. But one New Zealand cartoonist who’s had a big impact on me is Barry Linton. He drew comics for more than 40 years, and left behind an extraordinary body of work. I hope someone gets it all back into print soon. Other recent inspirations include American cartoonist Gabrielle Bell (whose diary comics are hilarious and lyrical) and, from Britain, Gareth Brookes, who made the art for his most recent graphic novel using pyrography and embroidery!

I’ve already mentioned Barry Linton and there are other earlier NZ cartoonists I’m fascinated by: Eric Resetar, Harry Bennett, and Jack Raeburn (all of who were publishing locally in the 1940s and 1950s). Rita Angus drew some gorgeous newspaper strips in the 1930s (as Rita Cook). And Joe Wylie, Laurence Clark, and Colin Wilson (along with Barry Linton and others) made fascinating comics in Strips magazine in the 1970s.

A cartoonist whose work over the past 40-odd years really needs collecting is Tim Bollinger. He’s drawn so many gorgeous, complex, utterly New Zealand comics for various magazines, newspapers, and zines; I’d love to see them brought together between two covers. These days, I get to see loads of amazing students’ comics, too. Look out for one of our former students, Liliana Mañetto Quick, on The Spinoff, where she draws a delicious regular comic about eating in Wellington. I know I’ve left out too many names in this brief list: there’s far too much wonderful work being made!

I have so many dream projects and I’m working on several of them right now. The elusive dream is to find enough time to actually finish them….! Mostly I’m excited to see so many local cartoonists and enthusiastic readers. I’ll bring some of what I’m working on, too.