“Education never ends, Watson. It is a series of lessons, with the greatest for the last.”
― Sir Arthur Conan Doyle, His Last Bow

Ever since his creation and first appearance in 1887 the character of Sherlock Holmes has been a firm favourite with the public, enjoying widespread popularity.

And one of the most remarkable characteristics about the Sherlock Holmes character has been its capacity to be adapted and altered in just about every possible way imaginable for theatre, radio, television, and cinema. Indeed, the character Sherlock Holmes holds the Guinness World record for the most portrayed literary human character in film and television history with over 25,000 adaptations.

For example, there are acclaimed television adaptations of Sherlock Holmes to be found in Japan, Poland, Russia and Canada to name just a few. Indeed, a case could be made that several other iconic characters such as Spock in Star Trek or Tom Baker era Doctor Who are thinly veiled versions of the Sherlock Holmes character.

Below are just a few Sherlock Holmes variations we have in our collections. So, go watch as Sherlock would say himself  “It’s elementary.”

Sherlock Holmes : the complete collection.
“Basil Rathbone portrays the deductive genius, Sherlock Holmes and Nigel Bruce his mystified colleague, Dr. Watson in these fourteen classic films. Regarded by many as the definitive cinematic version of the characters. The films range from classic reworkings of some of the Arthur Conan Doyle stories to transplanting Holmes to contemporary times  ( i.e. the 1940’s)  where he puts numerous fiendish Nazi plots to rest .    ” (Catalogue) Elementary. The first season
“A contemporary take on Sir Arthur Conan Doyle’s legendary characters of Sherlock Holmes and Dr. John Watson. Sherlock Holmes investigates crimes in modern-day New York City as a consultant to the NYPD and is assisted by Dr. Joan Watson, a former surgeon, who is hired by Holmes’ wealthy father to help keep the eccentric detective sober.” (Adapted from Catalogue)

We also have seasons two, Three, Four, Five, Six and the Seventh and final season.

Star Trek, the next generation. Season 2
“A new Captain, a new Enterprise, but still the same mission. To go where no man has gone before, seek out new life and discover new frontiers. This season includes  Elementary, Dear Data the episode where Data and Geordi take  time out to play Sherlock Holmes and Doctor Watson on the Holodeck. The story arc for this episode was continued in the season six episode ” Ship in a Bottle  ” (Adapted from Catalogue) We also have all the other Next Generation Series including Season Six.

Sherlock Holmes. Volume one
“One of the most acclaimed Television versions of the Sherlock Holmes stories  was the 1980s Granada TV version where Holmes was played by  Jeremy Brett.  Like Rathbone before him Brett was regarded as the actor who created the generation defining version of the role . This season includes the following episodes . A scandal in Bohemia , The dancing man, The hound of the Baskervilles,  The naval treaty and the The solitary cyclist. ” (Catalogue)
We also have seasons two, three and the final fourth season. 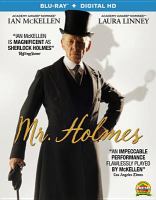 Mr. Holmes
“In 1947, an aging Sherlock Holmes returns from a journey to Japan, where, in search of a rare plant with powerful restorative qualities, he has witnessed the devastation of nuclear warfare. Now, in his remote seaside farmhouse, Holmes faces the end of his days, with only the company of his housekeeper and her young son, Roger. Grappling with the diminishing powers of his mind, Holmes comes to rely upon the boy as he revisits the circumstances of the unsolved case that forced him into retirement.” (Adapted from Catalogue) The hound of the Baskervilles
“Sherlock Holmes comes to the aid of his friend Henry Baskerville, who is under a family curse and menaced by a demonic dog that prowls the bogs near his estate and murders people. In this lush Gothic Horror tinged version of the most famous Holmes story of them all. Peter Cushing  and Sir Christopher Lee  star as Sherlock Holmes and  Sir Henry Baskerville in this  Hammer Film Production from 1959.  ” (Adapted from Catalogue) Murder rooms : the dark beginnings of Sherlock Holmes. The complete television series
“The story of the relationship between the young Arthur Conan Doyle and his real-life mentor and noted forensic scientist, Dr. Joseph Bell, as they unite to solve the most baffling murder cases in Victorian Scotland. This unusual take on the Holmes myth takes the real life relationship between Arthur Conan Doyle and  mentor the  noted forensic scientist, Dr. Joseph Bell ( the inspiration for Holmes ) as the starting inspiration for these fictional tales filmed on location in Edinburgh  ” (Adapted from Catalogue)

Murder by decree
“Christopher Plummer and James Mason take on the roles of Sherlock Holmes and Dr. Watson in this gritty, dark  murder mystery thriller about Jack The Ripper’s series of  murders in the 1880’s. The style and tone of the film is more of a  homage to the horror films of  the Hammer film Studio. The pairing of Plummer and Mason as Holmes and Watson is inspired and the idea of Holmes being in conflict with British Government black-ops is fascinating. It would have been interesting to see Plummer and Mason in other Holmes stories, but sadly this was their only outing. ” (Adapted from Catalogue)