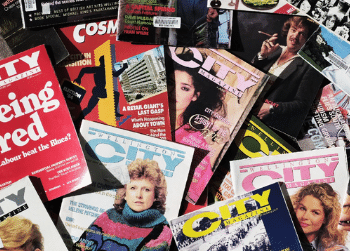 Not only will it showcase the big hair, shoulder pads and jazzercize of the era in the capital, but also the cool cats, clubs and cafes, and feature articles and columns from many still well-known contributors.

“Its first edition was printed at the very end of Robert Muldoon’s final term as the National Government’s Prime Minister in 1984, and came to an end after 27 issues following the share market crash in 1987.

“Published by Henry Newrick, the magazine had an enormous variety of feature articles and regular columns. Its advertising content reflected a boom in the local economy as financial regulatory controls were dropped, the share market rose to new heights and a new generation of high-earning workers, investors and entrepreneurs opened their wallets. The magazine was also highly innovative in its graphic design, page layout and high-quality photograph reproduction.

“The first five issues were called Wellington Cosmo to reflect the fact that Wellington was seen as being a particularly ‘cosmopolitan’ city, a legal threat to change the title as it violated the international Cosmopolitan Magazine trademark, and a failed appeal and injunction, saw it change its title to Wellington City Magazine.

“The magazine also took on causes, and was one of the first outlets to raise the profile of the St James Theatre when it was threatened with demolition.”

This was a labour of love for Gabor, hand scanning every page and photoshopping the gutter out of the double page spreads, says Manager of Libraries & Community Spaces, Laurinda Thomas.

“Everyone, young and old, is going to get a kick out of these magazines – it’s like a time machine, and everyone can just go online and get transported there.

“So many of the restaurants, bars, cafes, cinemas, galleries have been replaced with new ones, but some things that haven’t changed are the political, arts and cultural scene – and the Green Parrot!”

Go to wellington.recollect.co.nz and click on the ‘Collections’ button to see all 27 issues, and keep an eye on Wellington City Council and Libraries social media channels for some 1980s nostalgia to coincide with the launch.