Featherston Booktown (the only book town in New Zealand Aotearoa), will soon be hosting its sixth annual book festival. We’ve had a good perusal of this year’s programme — and what a fabulous line up of authors are going to be in attendance!

This year’s festival, like previous years, is aimed at book lovers of all ages — so there should be something for everyone. Featherston Library is hosting several events as part of the Featherston Booktown event that will appeal to families, including events featuring Donovan Bixley and Kimberly Andrews.

We honestly can’t imagine that the wonderful Joy Cowley needs any introduction, but we’ll certainly attempt to provide one!

Joy is a prolific and celebrated author of both children’s and adult books (more than 600 titles!) and a patron for many years of the Storylines Children’s Literature Foundation. In 2018 she was awarded the Order of New Zealand, and over the years Joy has been very generous with her time and appeared at a number of events at Wellington City Libraries. Joy is a resident of Featherston and in 2017 she agreed to be Featherston Booktown’s Patron.

You can watch Joy below being interviewed by Wallace Chapman on National Radio in 2018:

David Riley will also be launching his latest biography in his Wāhine Toa series about inspiring New Zealand women at the festival, and the subject is none other than Joy Cowley. More information — David Riley Joy Cowley Book Launch Event.

It’s honestly impossible for librarians to choose a single favourite Joy Cowley book, but we’ve included one of our best-loved titles below with the caveat that there are so many more to enjoy! 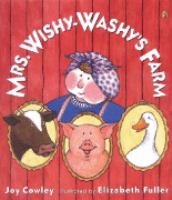 Mrs. Wishy-Washy’s farm / Cowley, Joy
“Tired of being washed by Mrs. Wishy-Washy, a cow, pig, and duck leave her farm and head for the city.” (Catalogue)

Madison Hamill is based in Wellington. She has an MA in Creative Writing from the International Institute of Modern Letters. Her work has appeared in The Spinoff, Sweet Mammalian, Turbine Kapohau and Pantograph Punch, and you can find her book of essays Specimen : personal essays on our catalogue (and a description below).

A reading from Madison of her Specimen collection featured in our Home with Ghosts video series last year — you can watch below:

Specimen : personal essays / Hamill, Madison
“A father rollerblading to church in his ministerial robes, a university student in a leotard sprinting through fog, a trespass notice from Pak’nSave, a beautiful unborn goat in a jar… In scenarios ranging from the mundane to the surreal, Madison Hamill looks back at her younger selves with a sharp eye. Was she good or evil? Ignorant or enlightened? What parts of herself did she give up in order to forge ahead in school, church, work, and relationships, with a self that made sense to others? With wit and intelligence, these shape-shifting essays probe the ways in which a person’s inner and outer worlds intersect and submit to one another. It is a brilliantly discomfiting, vivid and funny collection in which peace is found in the weirdest moments. ‘I never felt that I was looking at fine writing – only at astonishing writing.’–Elizabeth Knox.” (Catalogue)

Rachel Kerr is a Wellington writer who lives in Island Bay with her family. Her debut novel Victory Park was published in 2020, and she was kind enough to appear at a Newtown Library writer’s panel earlier this year (‘Writers on Newtown’).

She is studying te reo Māori, has degrees in film and creative writing, and has worked as a librarian for Te Kooti Whenua Māori and Judicial Libraries. Watch Rachel share her writing tips as part of NaNoWriMo in 2020 below:

Victory Park / Kerr, Rachel
“Kara lives in Victory Park council flats with her young son, just making a living by minding other people’s kids – her nightly smoke on the fire escape the only time she can drop her guard and imagine something better. But the truth is life is threadbare and unpromising until the mysterious Bridget moves in to the flats. The wife of a disgraced Ponzi schemer she brings with her glamour and wild dreams and an unexpected friendship. Drawn in, Kara forgets for a moment who she’s there to protect.” (Catalogue)

Ngā raukura rima tekau mā rima / Brown, Benjamin
“This is the Maori language edition of Fifty-Five Feathers. Pukeko is worried about her friend Gecko who seems to be suffering in the cold of winter. So she asks Wise Old Tree for some advice. ‘Make him a cloak of fifty-five feathers,’ she is told. So Pukeko sets out to help her friends. A delightful and beautifully illustrated story, brought to you by the author-illustrator team who produced Natural New Zealand ABC Wallchart and The Thief of Colours” (Catalogue)