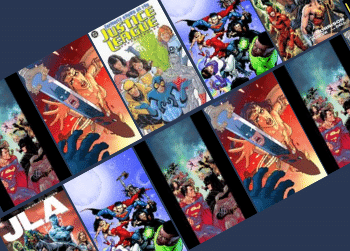 After years of fan campaigning, Zack Snyder’s Justice League has finally arrived on our screens. The newly expanded film restores the initial vision of the auteur director behind 300, Watchmen and Batman v Superman: Dawn of Justice, and is loosely based on Justice League: Origin by Geoff Johns and Jim Lee.

The people vs. the Justice League and Justice lost

What happens when the Justice League get in the way of real justice? Many writers have tried to do the ‘what if superheroes had to deal with the REAL issues’ story and failed, but in The People vs the Justice League, Christopher Priest and Pete Woods are able to make the real world/superhero world conflict compelling without one side diminishing the other. Featuring a disgruntled fanboy villain, a rival Justice League more interested in community action than punching bad guys, and a parody of Black Panther who uses the League’s downed satellite base to start a war between two African nations, this topical two volume run has plenty of material for a smart, trenchant director like Spike Lee to make into a great movie.

After trying to overcome his fatal weakness to fire, Martian Manhunter accidentally awakens a hostile ancestral personality in himself known as ‘Fernus the Burning Martian’, who wants nothing more than Earth’s total destruction. Trial by Fire, by writer Joe Kelly and artist Doug Mahnke, starts with a demonic possession mystery that spirals out into a world-ending threat, and it rides an interesting middle ground between horror story and superhero epic. That’s why Sam Raimi, director of both great superhero movies and great horror movies, would really make this story sing if he were the one adapting it.

Formerly known as the Justice League

Suggested director: Taika Waititi (Thor: Ragnarok, What We Do In The Shadows)

In the late 80s, Justice League was written by Keith Giffen, J.M. DeMatteis, and artist Kevin Maguire, who turned the book into a superhero ensemble comedy featuring lesser known heroes like Blue Beetle, Booster Gold and Elongated Man. Formerly Known as… has that creative team return to the characters (now called the ‘Super Buddies’) who have fallen on hard times and operate out of a strip mall. Taika Waititi is an easy pick for the only explicitly comedic Justice League, but I chose him for this story because he also excels at writing people with high opinions of themselves trying to reclaim their dignity in the face of adversity; think of the aristocratic vampires of What We Do in the Shadows reduced to living in a dilapidated flat or Thor struggling with his self-worth after his hammer is destroyed in Thor: Ragnarok.

Rock of Ages is another blockbuster-size JLA story from Grant Morrison and Howard Porter, in which the JLA face a crisis on two fronts: a corporate takeover-style threat from the Injustice Gang, and trying to prevent a map of all space-time from falling into the hands of the despotic alien Darkseid. Christopher Nolan is a filmmaker obsessed with time: how we fight against it (Dunkirk), what it robs from us (Interstellar), and how we could weaponise it for our benefit (Tenet). Rock of Ages has all the sort of mind-bending space-time headiness Nolan loves to play with, plus it has a lot of good Batman moments as well, so it would be a return to form for him in more ways than one.

The Russo brothers had the monumental task of bringing ten years of a superhero universe to a conclusion with Infinity War and Endgame, and if fan response and box-office speaks for anything, they succeeded with flying colours. They’re the only duo who would be up to the task to adapt Justice League vs Suicide Squad, which like their previous superhero efforts features a huge and complex story, loads of characters, and centres around a villain pursuing a gem for ultimate power. They might be repeating themselves, but if they did it twice before, then third time is just another charm.

One of the weirder stories from the 90s JLA run, Heaven’s Ladder (by Mark Waid and Bryan Hitch) follows the Justice League trying to save Earth after it has been stolen by immortal aliens called ‘Quantum Mechanics’ who want to build their own afterlife using the cultural ideas of Heaven from various alien worlds. It’s a far-out concept, but one that hits on a lot of the shared themes of the films of Lana and Lilly Wachowski, like the fusing of spirituality with science-fiction in The Matrix or the idea of the soul transcending cultural boundaries from Cloud Atlas.