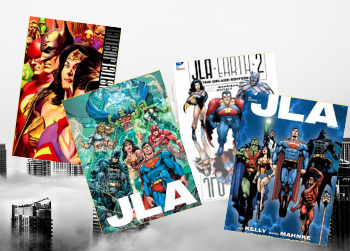 After years of fan campaigning, Zack Snyder’s Justice League has finally arrived on our screens. The newly expanded film restores the initial vision of the auteur director behind 300, Watchmen and Batman v Superman: Dawn of Justice, and is loosely based on Justice League: Origin by Geoff Johns and Jim Lee.

Snyder certainly had the track record to adapt DC Comics’ premiere super-team to the silver screen, having a number of comic-to-film adaptations under his belt already and a distinct aesthetic directly inspired by comic books. But there are many Justice League stories worthy of adaptation into film (particularly from JLA, the deliberately cinematic and much beloved series that ran from 1997 to 2006), just as there are many directors who would be perfect to adapt them.

So if you’re after more of the World’s Greatest Superheroes (or some great film recommendations), here are my picks for Justice League comics based on what directors would best adapt them into movies.

When Justice League was relaunched as JLA in 1997 by Grant Morrison and Howard Porter, their intent with the series was to tell big-scale stories like a blockbuster movie in comic form. The first story of their run, New World Order, delivers on exactly that, featuring an invasion by superheroes from another planet that opens with a giant spaceship over the White House (just like Emmerich’s Independence Day, coincidentally released the same year) and continues heightening the stakes from there. If they made a JLA movie in the 90s, you could absolutely see Emmerich as a front-runner for the director’s chair.

Bonus trivia: Every issue of JLA: New World Order is named after a sci-fi movie from the 1950s: THEM!, The Day the Earth Stood Still, War of the Worlds, and Invaders from Mars.

A good version of Lex Luthor recruits the JLA to help him fight the Crime Syndicate of Amerika (not a typo), their evil equivalent from an parallel Earth made of anti-matter, where reality, history and morality is reversed. People’s hearts are on the right side of their body instead of the left, pirates and gangsters are worshipped as heroes, executions are televised, and the dollar bills have “In Mammon We Trust” written on them, referencing the demon of greed. It brings to mind some of Paul Verhoeven’s best satire in Robocop and Starship Troopers, where the excesses of American capitalist and military society are heightened to ludicrous absurdity.

Justice hits all the beats of a great Justice League story: big action, great character moments, and deep-cut references from across DC history, but the main conceit of Justice is that the Legion of Doom, convinced that they are saving humanity from a coming apocalypse that the Justice League can’t prevent, become the story’s heroes. While George Miller would be a great choice for any superhero movie for his skill at directing action and tone, what makes Justice an ideal story for him would be the Legion of Doom as a cult of personality believing they know what’s best for society. It’s a theme that Miller has explored throughout his filmography, from the various desert demagogues of the Mad Max wastelands to the conservative penguin hegemony of Happy Feet.

Bonus trivia: In 2007, George Miller was tapped to direct a Justice League movie called Justice League: Mortal, but due to the success of Christopher Nolan’s Dark Knight trilogy, Warner Bros decided to focus on solo hero movies and the film was shelved indefinitely.

After facing a crisis of conscience, Wonder Woman’s Lasso of Truth is destroyed, and with it, the very concept of truth itself has been fractured — and the Justice League must contend with a world capriciously redefined by the dreams and fears of the human race. When explaining her writing process for WW84, Patty Jenkins said she wanted to write a superhero movie where at the end, nobody dies and the day is saved with a conversation rather than with brute strength. Golden Perfect hits on a lot of similar themes and ideas (WW84‘s Wishing Stone also has a similar effect on the world as the Lasso of Truth breaking), and while she would be repeating herself, it would be interesting to see Jenkins’ take on the rest of the Justice League.

Justice League Dark was created to highlight DC’s stable of magical and horror-influenced heroes such as John Constantine, Zatanna, Swamp Thing, and Deadman, who fight the supernatural threats that the regular flavour Justice League can’t handle. While there was an animated film that came out in 2017, Guillermo Del Toro has been trying to make a live-action Justice League Dark film since 2013. Given his experience in directing fantasy action and surreal horror (the first issue of the series has the Justice League contend with a storm made of human teeth, for starters), giving Del Toro the chance would be a no-brainer.

Bonus trivia: While Del Toro has set aside working on Justice League Dark (for now), a TV series is currently in development for HBO Max, spearheaded by J.J. Abrams.

The Justice League of America is caught in a harrowing situation after being sent by the United Nations Security Council to intervene in a South American nation ruled by an iron-fisted dictator. In response, the world’s nations start stockpiling discarded supervillain weapons and alien spacecrafts and repurposing them into weapons out of fear the Justice League will do the same to them. An underrated Justice League story that weds traditional superhero tropes to the realism of international relations and military strategy, this is probably the only JLA story I could see Kathryn Bigelow adapting.

Bonus trivia: JLA: The Hypothetical Woman is drawn by artist Jose-Luis Garcia Lopez, who is responsible for the DC Comics Style Guide, the official reference guide book for all DC Comics merchandise.