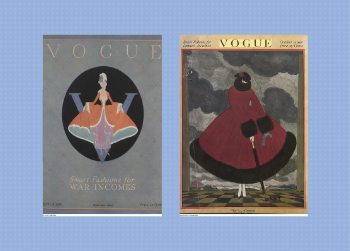 The article begins with the headline “The New Declaration of Independence”. Over the following page it goes on to examine shifting global power dynamics, explaining that “the spirit that made it impossible for the thirteen American colonies to remain vassals of Great Britain, makes it equally impossible that our nearly fifty states rest under the perpetual threat involved in Prussian militarism and imperial Pan-Germanism.” This article isn’t from the New York Times; it won’t be found in Papers Past. Instead it comes from one of Wellington City Libraries’ most interesting online resources: the Vogue Archive.

Vogue’s coverage of the First World War is significant for several reasons: for starters its variety. Just a brief search of the Archive using the keyword “War” between 1917 and 1918 brings up articles addressing everything from practical fashion advice (“Dressing on a War Income”) and the role of women in relief work (“The Woman’s Share of War”) to the importance of Liberty Loans (“If We Would Win This War”) and changes in mourning practices (“The Mode in Mourning”).

“An astonishing number of smart and individual mourning costumes are to be seen in New York at present.”

While the Archive doesn’t have any articles addressing New Zealand war experiences, it does give a unique insight into the experiences of women–especially those of the upper classes–in the U.S., U.K. and France. Articles often describe families who, up until 1914, had spent their lives moving between New York, London, Paris and Munich. As “As Seen By Him” notes, “Countless Americans are as much at home in Austria and Belgium as they are at home in America”. The same article directly addresses this assumed middle and upper class readership, noting that “however much we sympathise with our foreign friends, we have our own people to consider first, and we cannot let the working classes which depend on us, suffer because we are in mourning.”

“Peril is near you. Disaster is in the air. You must flee–flee.”

But perhaps the most surprising finds in the Vogue Archive are the in-depth articles that show why the magazine is arguably the birthplace of New Journalism. One such article appears in the August 1, 1916 edition under the title “Following the Fortune Tellers of War”, and tells the story of the rise of fortune tellers in wartime Paris. While the author, initialled as A.S., is critical of these clairvoyants and card readers, she visits no less than ten of them, with each one describing wild futures that end in the death of husbands, the birth of twins, sea voyages and the disappearance of friends. While the claims sound outrageous to a modern reader–and, it turns out, A.S.–they were probably an accurate description of many people’s lives (and futures) in Paris at the time.

To begin your own discovery of the Vogue Archive, go to Wellington City Libraries’ eLibrary and search under “V” in the A-Z of Resources (the Vogue Archive can also be found in the Art and Design topic). You’ll need your library card number and your PIN, then you’re ready to search. Alternatively, click here to go straight to the Vogue Archive.