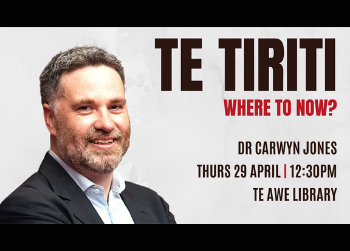 As Māmari Stephens points out in her essay “He rangi tā Matawhāiti, he rangi tā Matawhānui”, the 200th anniversary of the signing of te Tiriti o Waitangi isn’t far off. But what will Aotearoa look like 20 years from now? And how will historians in 2040 judge the developments of the past few decades?

One person who may be able to answer these questions is Dr Carwyn Jones (Ngāti Kahungunu). Dr Jones is an Associate Professor at the Faculty of Law at Victoria University and the author of New Treaty, New Tradition – Reconciling New Zealand and Māori Law and co-editor of Indigenous Peoples and the State: International Perspectives on the Treaty of Watangi. He’s also co-president of Te Hunga Rōia Māori o Aotearoa – The Māori Law Society and co-Editor of the Māori Law Review and AlterNative – an International Journal of Indigenous Peoples.

Dr Jones is involved in another significant project as well. Just over two months ago he joined the Adaptive Governance and Policy team at the BioHeritage Challenge, Ngā Koiora Tuku Iho as co-lead with Dr Maria Bargh. The role is a significant one: to work out how changes to governance and law in New Zealand can help save the country’s environment – before it’s too late.

To find out more, read our interview with Dr Carwyn Jones below!

The Biodiversity Strategy provides a key organising framework for developing local and regional biodiversity plans across the next 30 years in Aotearoa. It provides an important vision and ensures that there is a common understanding of where we as a country need to get to in order to protect and enhance biodiversity.

The WAI 262 report, Ko Aotearoa Tēnei, and the whole of government response that is developing, also addresses similar kinds of issues (amongst many others), with a particular focus on Māori participation and the role of mātauranga Māori. The Biodiversity Strategy and WAI 262 both engage directly with questions of environmental governance and policy relating to New Zealand biological heritage. One of the central features of the WAI 262 report is the emphasis on Māori communities, including iwi, hapū, and whanau, being able to proactively set out their aspirations for managing the relationship between people and the environment and having transparent mechanisms to ensure that central and local government are accountable for engaging with those aspirations. The report is careful to note that a Tiriti-consistent approach should first seek to empower Māori communities to make decisions that affect their taonga (including aspects of the natural environment) and that where partnership models are required, these must involve Māori participation in decision-making, not merely acting in an advisory capacity to the decision-maker. One of the stated outcomes of Te Mana o te Taiao is that Treaty partners, whānau, hapū, and iwi are exercising their full roles as kaitiaki.

Another current AGP activity is the co-development of legal mechanisms that “give voice to nature”. What would this include?

Some of the kinds of models that might be included here could be things like the recognition of legal personality of landscape features as we have seen with Te Urewera (formerly a national park) and Te Awa Tupua (formerly the Whanganui river). The idea of alternative governance models is also really interesting. Are there any you’re co-designing at the moment, and have they been scenario tested yet?

There are a whole range of things that contribute to alternative governance models. We’re exploring ideas from Te Ao Māori about organising relationships between people and, particularly, between people and the environment. We’re aiming to evaluate some of the existing models of co-governance that have been developed through the Treaty settlement process and other contexts, and we commissioned a report on financial instruments that are designed to support biodiversity and incentivise different modes of governance.

How do you see these governance models being implemented in the future?

The implementation needs to be sensitive to local context, the local environment, and local relationships. One aspect that is likely to be important in implementation is to empower local communities to exercise their role as kaitiaki.

When looking at different governance models and legal mechanisms for Aotearoa, are there overseas examples that have stood out as potentially useful?

Of course, these issues are not unique to Aotearoa and so there is a lot of work going on around the world that is engaging in this same kind of space. New Zealand tends to have quite a centralised understanding of the organisation of public power, whereas in federal systems such as the USA, Canada, and to some extent even Australia, there is more comfort with the idea of different spheres of authority and diffuse decision-making. That can sometimes create space for diverse and localised governance models.

How do you think these models and policies would approach crises like the current COVID-19 pandemic?

Likely to respond well to the diversity of need that this kind of crisis creates. Generally, if local communities are empowered, they will take steps, appropriate to their local circumstances, to keep people safe – as we saw with some of the community checkpoints that a number of Māori and iwi-based groups established and managed through the height of the pandemic in Aotearoa.