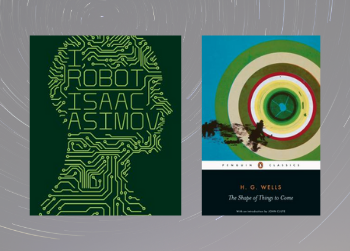 ” Humanity has the stars in its future, and that future is too important to be lost under the burden of juvenile folly and ignorant superstition.”
Isaac Asimov

Science fiction has always had an element to it that is about providing ways to explore the issues and problems that dominate our present but in an imaginative fiction laboratory context.  However, another aspect of science fiction is how it endeavours to look into our future and predict what it may hold.  And some works have proved to be almost perfect crystal balls predicting the future with such uncanny accuracy that readers might suspect that the authors might own their own time machines.

And going way back to the book that arguably spawned all modern-day science fiction Mary Shelley’s Frankenstein, or The Modern Prometheus. Frankenstein talks about limb transplants, organ regeneration as well as the dangers of run-away technology hundreds of years before they existed in reality.  Below are just a few prophetic science fictions works we have available to borrow, including the remarkable recent and chilling The Ministry for the Future by Kim Stanley Robinson.

Neuromancer / Gibson, William
“Before the Internet was commonplace, William Gibson showed us the Matrix–a world within the world, the representation of every byte of data in cyberspace. Henry Dorsett Case was the sharpest data-thief in the Matrix, until an ex-employer crippled his nervous system. Now a new employer has recruited him for a last-chance run against an unthinkably powerful artificial intelligence. With a mirror-eyed girl street-samurai riding shotgun, he’s ready for the silicon-quick, bleakly prophetic adventure that upped the ante on an entire genre of fiction.” (Catalogue) Also available as an Audiobook.

Brave new world / Huxley, Aldous
“Brave New World remains absolutely relevant to this day as both a cautionary dystopian tale in the vein of the George Orwell classic 1984, and as thought-provoking, thoroughly satisfying entertainment. Far in the future, the World Controllers have created the ideal society. Through genetic engineering, brainwashing and recreational sex and drugs all its members are happy consumers. Bernard Marx seems alone in feeling discontent, harbouring an ill-defined longing to break free. A visit to one of the few remaining Savage Reservations, where the old, imperfect life still continues, may be the cure for his distress.” (Catalogue) Also available as an eBook.

The ministry for the future / Robinson, Kim Stanley
“The Ministry for the Future is a masterpiece of the imagination, using fictional eyewitness accounts to tell the story of how climate change will affect us all. Its setting is not a desolate, post apocalyptic world, but a future that is almost upon us–and in which we might just overcome the extraordinary challenges we face. It is a novel both immediate and impactful, desperate and hopeful in equal measure, and it is one of the most powerful and original books on climate change ever written. ” (Catalogue)

Frankenstein,or The modern Prometheus / Shelley, Mary Wollstonecraft
“Victor Frankenstein, a gifted medical student, has discovered the secret of bringing dead matter to life. Gathering materials from graveyards and slaughterhouses, he creates a giant of superhuman strength. But he is horrified by what he has done, and runs away. How will the creature react to being left alone in the world by his creator? The book  has fascinated readers ever since it was first published in 1818.” (Catalogue) Also available the classic 1931 James Whale film  adaptation.

I, robot / Asimov, Isaac
“Earth is ruled by master-machines but the Three Laws of Robotics have been designed to ensure humans maintain the upper hand: 1) A robot may not injure a human being or allow a human being to come to harm, 2) A robot must obey orders given to it by human beings except where such orders would conflict with the First Law. 3) A robot must protect its own existence as long as such protection does not conflict with the First or Second Law. But what happens when a rogue robot’s idea of what is good for society contravenes the Three Laws?” (Adapted from Catalogue) Also available as an eBook.

The shape of things to come : the ultimate revolution / Wells, H. G.
“A prescient look at mankind’s future. When Dr. Philip Raven, an intellectual working for the League of Nations, dies in 1930, he leaves behind a powerful legacy – an unpublished ‘dream book’. Inspired by visions he has experienced for many years, it appears to be a book written far into the future: a history of humanity from the date of his death up to 2105. The Shape of Things to Come provides this ‘history of the future’, an account that was in some ways remarkably prescient – predicting climatic disaster and sweeping cultural changes, including a second world war, the rise of chemical warfare and political instabilities in the Middle East.” (Adapted from Catalogue)

1984 / Orwell, George
“To Winston Smith, a young man who works in the Ministry of Truth (Minitru for short), come two people who transform his life completely. One is Julia, whom he meets after she hands him a slip reading, “I love you.” The other is O’Brien, who tells him, “We shall meet in the place where there is no darkness.” The way in which Winston is betrayed by the one and, against his own desires and instincts, ultimately betrays the other, makes a story of mounting drama and suspense. ” (Catalogue) Also available is the 1984  film  adaptation.

The left hand of darkness / Le Guin, Ursula K.
“When the human ambassador Genly Ai is sent to Gethen, the planet known as Winter by those outsiders who have experienced its arctic climate, he thinks that his mission will be a standard one of making peace between warring factions. Instead the ambassador finds himself wildly unprepared. For Gethen is inhabited by a society with a rich, ancient culture full of strange beauty and deadly intrigue – a society of people who are both male and female in one, and neither. This lack of fixed gender, and the resulting lack of gender-based discrimination, is the very cornerstone of Gethen life. But Genly is all too human. Unless he can overcome his ingrained prejudices about the significance of “male” and “female,” he may destroy both his mission and himself.” (Catalogue) Also available as an Audiobook .