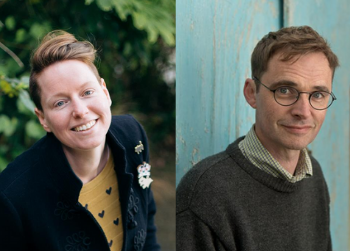 If you’re a graphic artist, zine creator or comic book fan, this event is a must-see! Come along to hear Tara Black in conversation with Dylan Horrocks. Part workshop, part overview, part discussion — join us for what promises to be a fabulous, informative, and entertaining event.

What? Talk and draw with Tara Black in discussion with Dylan Horrocks Tara Black is one of the most distinctive and unique graphic artists working in Aotearoa, New Zealand. Alongside her excellent webcomics (we’re particularly partial to The Blue Fury, in which the ghosts of Janet Frame and Katherine Mansfield get their kicks out of haunting a first-year English teacher), Tara is known for doing live illustrations of events around Wellington City. Tara’s work appears in Booknotes, The Sapling and Stasis Journal. Her first book of graphic works This Is Not A Pipe was published in November 2020 by VUP. The Eisner Award-winning Dylan Horrocks, of course, is one of the most talented and versatile cartoonists working in the scene today. His works range from the meta-comic tour-de-force that is Sam Zabel and the Magic Pen (VUP, 2014) to the iconic Hicksville (Black Eye Comics, 1998), which we  believe draws some inspiration from  Hastings, which may have been briefly known as Hicksville in the early 1870s, with a healthy dose of work on the Batman and Batgirl comics in the early-mid 2000s.