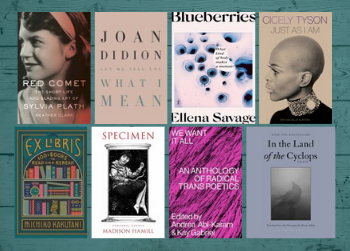 Take a peek at some of our latest books in literature! Our favourites include ‘Ex Libris’ from Michiko Kakutani and Madison Hamill’s ‘Specimen’, both containing collections of intelligent and exciting essays. Happy reading!

Let me tell you what I mean / Didion, Joan
“Twelve early pieces never before collected that offer an illuminating glimpse into the mind and process of Joan Didion. From her admiration for Hemingway’s sentences to her acknowledgment that Martha Stewart’s story is one that has historically encouraged women in this country, even as it has threatened men, these essays are acutely and brilliantly observed. Each piece is classic Didion: incisive, bemused, and stunningly prescient.” (Catalogue) 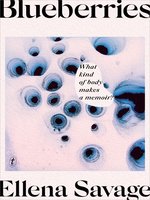 Blueberries, Ellena Savage (ebook)
Blueberries could be described as a collection of essays, the closest term available for a book that resists classification; a blend of personal essay, polemic, prose poetry, true-crime journalism and confession that considers a fragmented life, reflecting on what it means to be a woman, a body, an artist. In crystalline prose, Savage explores the essential questions of the examined life: what is it to desire? What is it to accommodate oneself to the world? And at what cost? (Overdrive description)

Just as I am : a memoir / Tyson, Cicely
“At last, the Academy, Tony, and three-time Emmy Award-winning actor and trailblazer, Cicely Tyson, tells her stunning story, looking back at her six-decade career and life.” (Catalogue)

Ex libris / Kakutani, Michiko
“From ‘the most powerful book critic in the English-speaking world’ (Vanity Fair) comes an inspiring and beautifully illustrated selection of the life-changing books that none of us should miss.” (Adapted from Catalogue)

Specimen : personal essays / Hamill, Madison
“In scenarios ranging from the mundane to the surreal, Madison Hamill looks back at her younger selves with a sharp eye. Was she good or evil? Ignorant or enlightened? What parts of herself did she give up in order to forge ahead in school, church, work, and relationships, with a self that made sense to others? With wit and intelligence, these shape-shifting essays probe the ways in which a person’s inner and outer worlds intersect and submit to one another.” (Catalogue)

We want it all : an anthology of radical trans poetics
“An anthology of formally inventive writing by trans poets against capital and empire. Writing in dialogue with emancipatory political movements, the intergenerational writers assembled here imagine an altogether overturned world in poems that pursue the particular and multiple trans relationships to desire, embodiment, housing, sex, ecology, history, pop culture, and the working day.” (Catalogue)

Red comet : the short life and blazing art of Sylvia Plath / Clark, Heather L.
“The highly anticipated new biography of Sylvia Plath that focuses on her remarkable literary and intellectual achievements, while restoring the woman behind the long-held myths about her life and art. Along with illuminating readings of the poems themselves, Clark’s meticulous, compassionate research brings us closer than ever to the spirited woman and visionary artist who blazed a trail that still lights the way for women poets the world over.” (Adapted from Catalogue) 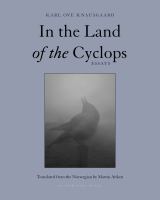 In the land of the cyclops : essays / Knausgård, Karl Ove
“In the Land of the Cyclops is Karl Ove Knausgaard’s first collection of essays to be published in English. These essays capture Knausgaard’s remarkable ability to mediate between the personal and the universal, between life and art. Each piece glimmers with Knausgaard’s candor and his longing to authentically see, understand, and experience the world.” (Catalogue)