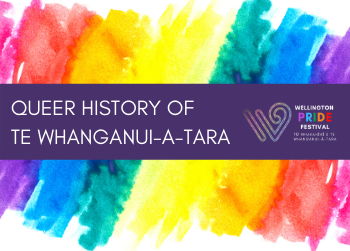 Join us this Thursday at Te Awe Library for an evening of sharing Wellington’s queer and takatāpui oral history!

We’ll be hearing kōrero from historians Will Hansen and Roger Swanson, both involved in LAGANZ, as well as Kay’la Rian representing Tīwhanawhana, celebrating the organisation’s 20th anniversary. Activist and counsellor Mani Mitchell and MC Georgia Mackay will also be involved.

For more info, check out the panellist bios below–assembled by the fantastic team at Te Awe Library!

We’re very happy to welcome Will Hansen (he/him) to speak at ‘Queer History’.

Will is a freelance historian and PhD student researching the histories of Aotearoa’s trans communities. He’s passionate about archiving and sharing queer history towards queer liberation and intergenerational solidarity. He’s also a former co-worker of ours!

In addition to his research, Will is a trustee of Te Pūranga Takatāpui o Aotearoa, Lesbian and Gay Archives New Zealand (LAGANZ). He recently worked on two incredible projects: ‘The Archive is Alive: Exploring Aotearoa NZ’s Queer History’ and ‘Trans Past, Trans Present: Making Trans Histories’.

‘The Archive is Alive’ is an on-going collaboration between LAGANZ and Wellington Zinefest. Launched in 2020, the group collectively develops zines exploring Wellington’s local queer history and the importance of accessing queer archives for people today.

Will coordinated Te Papa’s Trans Past, Trans Present project in 2019. Te Papa asked trans people across generations to share stories about their cherished objects. The storytellers subverted typical narratives about trans experiences, highlighting the importance of trans people establishing and sharing their own histories.

You can hear Will discuss queer history with our other speakers at Te Awe Library on Thursday the 18th of March. This event is part of our Pride Festival event series.

Kay’la is a tautoko of Tīwhanawhana, a takatāpui community group in Wellington. Apart from supporting Tīwhanawhana for 15 years, she has been involved in organising community events, hui, and liaising with LGBTQI+ groups.

Kay’la joins us from the cascade of events Tīwhanawhana is involved in over Te Whanganui-a-Tara Wellington Pride Festival 2021. This includes participation in He Tangata, Wellington Pride’s first official opening gala, and a celebration of the community’s 20th anniversary at Thistle Hall on Monday 15th March 2021.

Kay’la was born in New Plymouth but has lived in Wellington essentially since birth. She’s a strong trans advocate, associated with the NZ Aids Foundation and in general the LGBT community. Kay’la has worked within the sex worker industry and does work with Wellington City Council Housing to run events and promote community wellbeing. She has also worked with Carmen Rupe, including organising her book launch in Auckland and Wellington, as well as assisting with the catering for her 70th on the waterfront.

Through her participation in podcasts and documentaries about the queer history of Wellington, Kay’la has added to the oral history of our city. RNZ’s podcast “He Kākano Ahau: Decolonising Gender and Sexuality” focuses on what it means to be Urban Māori, and specially explores Kay’la’s trans perspective.

As part of our Pride celebrations, we are excited to have Mani Mitchell (they/them/Mx) on board for Te Awe Library’s ‘Queer History’ talk.

Mani is non-binary and was the first person in Aotearoa to come out as an intersex person. They have a background in media, emergency management and education.

Mani has been a queer activist over the last three decades. They continue to do a lot of mahi in their advocacy and in their role as a counsellor specialising in intersex, identity, gender, sexuality, queer, trans and difference issues. They have worked with the New Zealand Human Rights Commission, among other government agencies, to advocate for awareness and improved policies around intersex issues. Mani has also advocated for PTSD awareness, with a particular focus on mental health issues that impact youth and the rainbow community.

In 1997, Mani established Intersex Awareness New Zealand, an organisation that facilitates peer support and advocates nationally for intersex people in Aotearoa. Among the other work and advocacy they do, Mani is currently a member of the New Zealand Counsellors Association’s regional ethics team as well as a representative of the Intersex Steering Committee for Oceania.

Roger has been involved with Lesbian and Gay Archives New Zealand (LAGANZ) for three decades and will be discussing their dedication to the collection and preservation of our queer history and making it accessible to our wider community.

A proud Wellingtonian, Roger has lived here for most of his life and after years of activism—such as campaigning for the Homosexual Law Reform and for Civil Union—continues his dedication to the queer community through work as Secretary of the LAGANZ board of trustees. Roger’s involvement with LAGANZ is an extension on his librarian work; he has worked at the Parliamentary Library and National Library, and although he is now retired, he continues to support the queer community through this important mahi as a trustee. Roger joined the board of LAGANZ in the 90s and has a wealth of knowledge about the organisation we’re all sure to learn a lot from.

Please join us to honour Roger’s legendary career as well as our other speakers at Te Awe Library.

Georgia is a Scot who has made Wellington her home. She’s lived a few lives, having worked in libraries, and as an archaeologist and museum professional, and a fashion researcher. Georgia currently works at Wellington City Council Archives as an archive access specialist.

Georgia stumbled into the world of fashion academia and has made a passion project of talking about fashion, subculture, gender and shoes. She has just completed her PhD specialising in possibly the most interesting topic ever: Doc Martens! Her research explores the special relationship women have with the brand, engaging with feminist theory, pop culture, subculture expression and the social life of clothing. Her research communicates the importance of fashion as political engagement and self-expression. This extensive repertoire shows Georgia’s confidence with processes of historical preservation and the social value of material culture. This combination of passions will be a fantastic place to start for guiding our speakers at the ‘Queer History’ talk on Thursday.