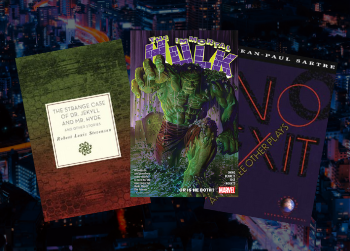 The Immortal Hulk is the newest comic to feature Dr Bruce Banner and his green alter ego and since the series’ debut in 2018, it’s become a massive hit with fans and critics. Written by Al Ewing and drawn by Joe Bennett, the series centres on a new revelation about the character: Bruce Banner can die but the Hulk cannot, which makes them, as the title suggests, immortal. Thanks to this undead twist, Ewing and Bennett use the story opportunity to turn Hulk into a horror book, closer in tone to old EC Comics or Alan Moore’s Swamp Thing, but with the same action and character drama you’d expect from a Marvel comic. The newly-minted Immortal Hulk battles such terrors as radioactive zombies, paranormal possessions, city-destroying kaiju, the Devil, the legions of Hell, and my personal favourite, Xemnu the Titan, a cyborg yeti alien who can manipulate people’s memories through smartphones.

The other unique angle to The Immortal Hulk is that every issue opens with a quote from a famous book or writer, chosen by Ewing to give thematic weight to each issue and something for the audience to ponder on a close reading. I’ve picked out some of the best opening quotations from the first three volumes of The Immortal Hulk, and linked them to the works of their respective writers so you can find them in our collection. If you want to read the comic first, you can order the first volume here or read it on Overdrive here.

‘My devil had long been caged, he came out roaring’ – The strange case of Dr. Jekyll and Mr. Hyde and other stories / Stevenson, Robert Louis

Out of all of the original 60s Marvel heroes, the Incredible Hulk is the only one with a literary pedigree; he was inspired by Robert Louis Stevenson’s Dr Jekyll and Mr Hyde. The influence of ‘Jekyll and Hyde’ on the Hulk is obvious, as they both tell the story of mild-mannered men grappling with a split personality that can physically transform them into a monster. Where the Hulk is usually childlike in his rage, Bruce’s new ‘Immortal Hulk’ personality is significantly more intelligent and menacing than the other Hulks, much like Mr Hyde in the book.

“One always dies too soon – or too late” – No exit, and three other plays / Sartre, Jean-Paul

For the first few issues of Immortal Hulk, Banner only transforms into the Hulk when he dies, and returns to life via a portal called ‘The Green Door’. A consistent theme of the series is how it would affect someone psychologically to come back from the dead, as comic book heroes frequently do. This pairs interestingly with Ewing’s choice to quote No Exit, a play by French existentialist Jean-Paul Sartre about three souls who are locked in a room together in the afterlife. For the characters in No Exit, death is a one-way door, whereas for Bruce and the Hulk both, death is a revolving one, a trap for which there too seems to be no exit.

‘Many names hath god given him, names of mystery, secret and terrible’ – Red cactus : the life of Anna Kingsford / Pert, Alan

In interviews, Al Ewing has said that he picked up the idea of the Green Door from the vintage pop song ‘The Green Door‘ and from theosophist writer Anna Kingsford. In her book of her religious visions, Clothed With the Sun, she wrote that the devil, rather than being an adversary for God, works for Him in many roles: a destroyer, an avenger, and as the keeper of the door to Hell who ‘sifts’ souls so that only the wicked enter. Appropriately, the Immortal Hulk takes on the name ‘Devil Hulk’ during a fight with the Avengers, as he tears through them with no effort. But the choice of Kingsford’s quote implies that the Hulk could become a force for good as well, like her conception of the devil.

“Fathers and teachers, I ponder, What is Hell? I maintain that it is the suffering of being unable to love” – The brothers Karamazov : a novel in four parts and an epilogue / Dostoyevsky, Fyodor

The main villain of the first three volumes is Bruce’s deceased father, Brian Banner, who has struck a deal with the demonic ‘One Below All’ so he can return to Earth. Brian was openly hostile to Bruce throughout his childhood, believing Bruce to be a ‘monster’ who would replace him, and Bruce’s suppressed rage at this treatment eventually coalesced into his Hulk personality. The issue where the Hulk finally confronts his father in Hell opens with the above line from The Brothers Karamazov, which follows three brothers and their respective relationships with their distant, unscrupulous father.

‘Did he who made the Lamb make thee?’ – Songs of innocence and of experience : shewing the two contrary states of the human soul, 1789-1794 / Blake, William

The Romantic poet and artist William Blake is referenced throughout the Immortal Hulk run. The above quote, from his poem ‘The Tyger’ in Songs of Experience, ponders how a creature as fearsome and stunning as a tiger could exist in the same world as an innocent lamb, and considers this a possible contradiction in God’s creation. Like Blake’s interrogation of the tiger, the ‘why?’ of the Hulk’s existence is a recurring question in Immortal Hulk; how could this monster exist within this man? Does he serve some kind of purpose that we’re not aware of? And what will he decide to do with his power?