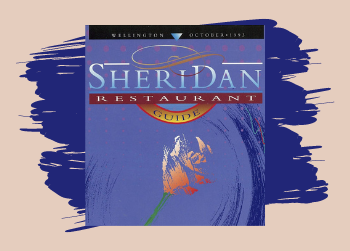 Newly digitised on our Recollect site, the Sheridan Restaurant Guide from 1993 is another snap-shot of our eating-out habits and a startling contrast to the Menu Guide published a decade earlier.

Unlike the Menu Guide which was sold as a one-off product (the incentive to purchase being the number of discount coupons it contained) the Sheridan Guide was printed twice a year and given away as a ‘freebie’ via magazine racks in hotel lobbies, tourist sites and on inner-city streets. A majority of restaurants in the early 1980s were either ‘steak & chips’ family affairs or expensive French-based fine-dining establishments with only a small number of ‘ethnic’ restaurants. Ten years on and the Thai, Indian and Cambodian restaurants which earlier would have been regarded as extraordinarily exotic were now becoming mainstream. The high interest in ‘ethnic cuisine’ (particularly from Asia) which began in the early 1990s was not lost on conventional restaurateurs; the menu of Dada (formerly located at 9 Edward street, later to became the location of ESC and latterly Meow) is a good example of this with salmon sushi, Tom Yum soup and Rogan Josh sitting happily alongside venison Denver leg and char-grilled lamb medallions. Fine-dining restaurants began to lose their stuffiness during this period; starched tablecloths, carpeted floors and silver service gave way to the ‘smart casualness’ which continues to  dominate this sector of the restaurant trade to this day. Typical of this style was Brasserie Flip located on the first floor of the former RSA building in upper Ghuznee Street. Not only was this an unusual location away from Wellington’s traditional restaurant ‘strips’, the interior design came to exemplify many similar restaurants; former commercial office fitouts and wall linings were ripped out to expose the raw interior of the building and a ‘post industrial’ look created. However, some new restaurants did still go ‘all out’ with highly original (and expensive) interior fitouts. The Opera Restaurant and Bar (better known simply as ‘Opera’) was one such establishment which featured sculpted devils & angels hanging on walls and a ‘floating’ staircase to access the upper level. Operatic recordings were piped through the high-quality sound system during the day and into the early evening which later gave way to the pounding beats of contemporary dance music. ‘Opera’ was among the pioneering establishments that transformed Courtenay Place in the early 1990s, taking advantage of the relaxation in regulations which previously made liquor licenses for restaurants and bars (particularly for any establishment wanting to serve alcohol after 10pm) difficult and expensive to obtain. Correspondingly, this change in regulations also saw a decline in BYO restaurants as the profit that could be made on alcohol sales (if a liquor license could be obtained) were substantial. Only two restaurants featured in the Menu Guide from 1982 were also covered in Sheridan guide; the Mexican Cantina and Greta Point Tavern. The ‘Mex’ was already in decline by this point having lost the monopoly it once had on serving nachos and tacos. It was sold by its proprietor Jenny Burns (1929-2002) to new owners but stuttered on for another couple of years before finally closing its doors in the mid-1990s. However, with its menu virtually unchanged, comparing its 1982 prices with its 1993 prices is an interesting exercise which illustrates the impact of inflation during this period. The Greta Point Tavern continued with its ‘family’ orientated menu through to the early 2000s. It closed to make way for a housing development but survives in a manner after being  a dramatically transformed in 2002 when the entire building was lifted onto a barge and relocated to the inner-harbour waterfront where it  became Foxglove. Meanwhile, only three of the restaurants featured in the 1993 Sheridan guide have survived to the present day (2021),  The Tug Boat (though it has had many changes of owners, name variations and menus, it has remained floating at its berth next to Freyberg Pool on Oriental Bay ever since), the politically themed Back Bencher and the iconic Boulcott Street Bistro which reaches its 30th birthday this year.