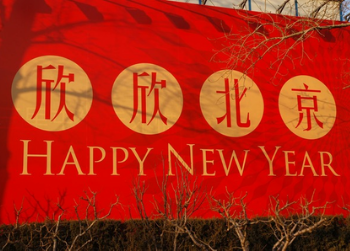 2021 will be the year of the Ox and begins on the 12th February in the Western Calendar.

The Ox is second of the 12-year cycle of animals that appear in the Chinese zodiac. The legend is that there was a race between all the animals to reach the Heavenly Gate and the first twelve in the race would go into the Zodiac. Rat having crossed a river in the Ox’s ear jumped out at the last minute to become the first animal in the race with the Ox coming second. In Chinese culture, the Ox is seen in a very positive light because of its role in agriculture with having many positive attributes such as being honest and hardworking.

As part of our Chinese New Year celebrations and to highlight this rich and ancient culture we have highlighted just a few of the most critically acclaimed Chinese novels in English we have available to borrow. We also have an extensive collection of books in Chinese as well as loads of other Chinese resources and items. Enjoy and Happy New Year!

Red sorghum / Mo, Yan
“Red Sorghum is a novel of family, myth, and memory, set during the fratricidal barbarity of the 1930s, when the Chinese battled both Japanese invaders and each other. [It is] narrated by a young man at the end of the cultural revolution who tells the stories of his father, Douguan; his granddad, the most ruthless and infamous bandit and guerrilla commander in the region; and his grandma who fell in love with the commander when he raped her in the sorghum fields, only three days after her arranged marriage.”(Adapted from Catalogue) Also available as an eBook.

Waiting / Jin, Ha
“Lin Kong, a devoted and ambitious doctor, is in love with an educated, modern woman, Mannu Wu. But, his family chose a wife for him when he was young. Tracing these lives through their summer of decision, this work conjures the texture of daily life in a place where the demands of human longing must contend with the weight of centuries of wisdom.” (Adapted from Catalogue)

The seventh day / Yu, Hua
“Yang Fei was born on a moving train. Lost by his mother, adopted by a young switchman, raised with simplicity and love, he is utterly unprepared for the tempestuous changes that await him and his country. As a young man, he searches for a place to belong in a nation that is ceaselessly reinventing itself, but he remains on the edges of society. At age forty-one, he meets an accidental and unceremonious death. Lacking the money for a burial plot, he must roam the afterworld aimlessly, without rest. Over the course of seven days, he encounters the souls of the people he’s lost.” (Adapted from Catalogue) Also available as an eBook.

Soul mountain = Ling shan / Gao, Xingjian
“Winner of the Nobel Prize for Literature 2000.  ‘Soul Mountain’ is an elegant, unforgettable novel that journeys deep into the heart of modern-day China.Interwoven with a myriad of stories and countless memorable characters – from venerable Daoist masters and Buddhist nuns to mythical Wild Men, deadly Qichun snakes, and farting buses – is the narrator’s poignant inner journey and search for freedom. Slowly, with the help of memory, imagination, and sensory experience, he reconstructs his personal past. He laments the impact of the Cultural Revolution on the ecology – both human and physical – of China.” ( Adapted from Catalogue)

Balzac and the little Chinese seamstress / Sijie, Dai
“At the height of Mao’s Cultural Revolution, two boys are exiled to the countryside for “reeducation.” But the boys have a violin to distract them – as well as, before long, a beautiful young tailor’s daughter and a stash of Western classics. Two boys, both sons of doctors, are sent to the top of a mountain for re-education in Mao’s China; an education that involves carting buckets of excrement up and down precipitous paths. They discover instead the discreet charm of bourgeois literature and the local tailor’s attractive daughter.” (Catalogue) Click here to borrow the film adaptation.

The flowers of war / Yan, Geling
“This short novel is based on true events that took place during the Nanking Massacre in 1937 when the Japanese invaded the Chinese city. It tells the story of an American missionary who, for a few terrifying days, finds himself sheltering a group of schoolgirls, prostitutes and wounded Chinese soldiers in the compound of his church.” (Catalogue) Click here to see the availability of the film adaptation. 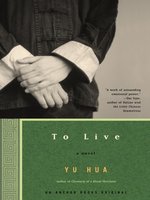 To Live, Yu Hua (ebook)
“After squandering his family’s fortune in gambling dens and brothels, the young, deeply penitent Fugui settles down to do the honest work of a farmer. Forced by the Nationalist Army to leave behind his family, he witnesses the horrors and privations of the Civil War, only to return years later to face a string of hardships brought on by the ravages of the Cultural Revolution. Left with an ox as the companion of his final years, Fugui stands as a model of flinty authenticity, buoyed by his appreciation for life in this narrative of humbling power.” (Adapted from Overdrive description) Click here to see the availability of the film adaptation.

The three-body problem / Liu, Cixin
“A Hugo-Award winning tour de force”  Set against the backdrop of China’s Cultural Revolution, a secret military project sends signals into space to establish contact with aliens. An alien civilization on the brink of destruction captures the signal and plans to invade Earth. Meanwhile, on Earth, different camps start forming, planning to either welcome the superior beings and help them take over a world seen as corrupt, or to fight against the invasion. ” (Adapted from Catalogue) Also available as an Audiobook.