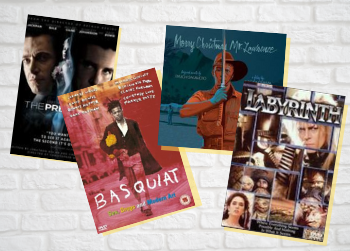 The truth is, of course, that there is no journey. We are arriving and departing all at the same time.”
― David Bowie

Its been five years since David Bowie passed on the 10th of Jan 2016. Commonly regarded as one of the most important musicians of the 20th century his albums gaining ten platinum certifications, eleven gold and eight silver, and sold in excess of 100 million albums. Following his death Rolling stone declared him the “Greatest Rock Star Ever”.

We have a very substantial collection of Bowie CD’s in our collection click here for the full list.

However, Bowie was much more than just a rock star his interests were rich and varied and covered just about every cultural field imaginable including books, he was a voracious reader (click here to see the blog we did about Bowie’s love of books); art he collected; he wrote about and exhibited art; theatre both as an actor in productions such as Elephant man and as a playwright in one of his last creative endeavours Lazarus, and also, of course, film.

And it is his career in film we are going to briefly look at in this blog.

All the films below are in our catalogue and available to borrow. Enjoy!

The prestige
“Still arguably Christopher Nolan’s best film. The prestige is set against the backdrop of turn-of-the-century London. Two magicians share an intense rivalry with each other and leads them on a life-long battle for supremacy. The rivalry is so intense that is will be full of obsession, deceit and jealousy, with both dangerous and deadly consequences. From the time that Robert angier and Alfred Bordon first met, the two were competitors. However, their once friendly competition evolves into battle for each other’s trade secrets.” (Adapted from Catalogue)

Basquiat
“Bowie plays Andy Warhol to a tee (who famously hated the song Bowie wrote about him) in this film based on the life of Jean-Michel Basquiat, a young American unknown graffiti artist who lived on the streets of New York City in a cardboard box. Jean-Michel was “discovered” by Andy Warhol’s art world and became a star. Basquiat is a brilliant artist whose success came at a high price.”(Adapted from Catalogue) 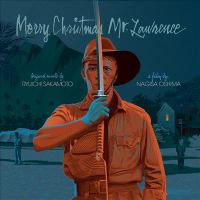 Merry Christmas, Mr. Lawrence
“Bowie plays Major Jack Celliers (alongside fellow musician Ryuichi Sakamoto as his Japanese counterpart) in this powerful wartime drama where the story focuses on a battle of wills and philosophies fought between Major Celliers as the prisoner of war, and the camp commander, Captain Yonnoi. Captain Yonnoi is mystified by the new prisoner that he fails to intimidate and believes he is evil spirit. In a desperate attempt to restore his sense of power, he provokes Celliers into a final act of defiance which seals both their fates.” (Adapted from Catalogue)

Twin Peaks : Fire walk with me
“Bowie plays the Hawian shirted enigmatic agent Phillip Jeffries in Fire walk with me and used unused footage of Bowie from the film in the 2017 Television series Twin Peaks: the return. The film traces the week leading up to Laura’s death, Fire Walk With Me explores the darkness engulfing her soul and lays bare her downward spiral into drug abuse and sexual depravity. It’s a journey filled with symbolism, dream imagery, bizarre characters and a startling new interpretation of the Red Room. “(Adapted from Catalogue)

Zoolander
“Bowies brief but memorable role in Zoolander is really just a cameo where he plays himself judging a fashion runway ‘walk-off’ in the zany fun and outrageous fashion comedy starring Ben Stiller and Owen Wilson. Director Ben Stiller later admitted he was ‘in shock’ when Bowie agreed saying that it was ‘the high point of his career’.” (Adapted from Catalogue)

Labyrinth
“Bowie plays the creepy and sexy evil Jareth king of the goblins in this Muppetastic 80’s Family favourite, which was met with mixed reviews on its release and is now regarded as a firm family favourite. When young Sarah cavalierly wishes that goblins would take her crying baby brother away, she gets her wish. Now, she must confront Gareth – ruler of a mystical world one step removed from reality, master of the goblins who abducted her brother… and creator of the treacherous labyrinth that Sarah must solve in order to make things right.” (Adapted from Catalogue) 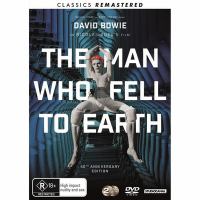 The man who fell to Earth
“In many peoples opinion including Bowie himself his was his best film. He liked it so much he bought the rights to the book and co wrote the play Lazurus as a sequel not to mention using elements from his abandoned soundtrack in Low . The Polymesmeric, non linear plot added to the films unique strangeness. The film loosely revolves around Thomas Jerome Newton a humanoid alien who comes to Earth to get water for his dying planet. But director Nicolas Roeg’s aims for the film are far loftier and highbrow than any basic plot creating a labyrinthian maze of interlocking visuals, concepts and ideas. A truly stunning film in many ways way ahead of its time and also strangely slightly dated ” . (Adapted from Catalogue)