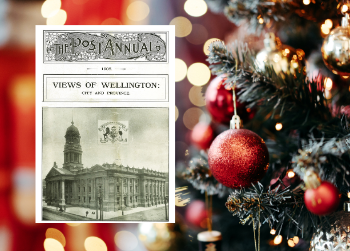 Decades before sending wall calendars to friends and relatives as Christmas presents became popular, local newspapers across New Zealand did a roaring trade in special ‘annual’ and ‘Christmas’ editions which would be published shortly before the festive season.

Photographers would be sent out to capture the local region in all its glory and the resulting pictorial publications would be sent across the country or overseas to those back ‘home’ as gifts. Though it would be another 20 years before printing technology reached the point where photographs were appearing in newspapers, they could be reproduced on semi-gloss paper and published as magazines where longer lead-in times allowed lithographers to create excellent quality images not yet possible in a daily newsprint publication. Wellington’s main local newspaper, The Evening Post, regularly published these special editions from around the turn of last century and they proved to be popular gift items. Helping sales in this regard was the sheer novelty of seeing images of local features reproduced in this manner; until then photographs were regarded as  expensive, hand-made items which were printed in studios in limited numbers to be framed and hung on walls.  Now digitised on Wellington City Recollect is the Evening Post’s annual from 1905 (you can also click on the images on this page to enlarge them to full size). Available in the weeks leading up to Christmas, it was originally sold through bookshops, newsagents or directly from the Evening Post at a cost of 1 shilling (about $9 in 2020 terms).

Lavishly illustrated, the ‘Post’ was proud of the fact that it contained nearly 150 photographs whereas similar Christmas editions produced by other newspapers might contain as few as 12. Much was made of our ‘new’ buildings such as the Town Hall and the Newtown Library (the first branch library in NZ) which were included to show how progressive the city was at the time.  There’s also a startling number of photographs of water-supply lakes & dams, including the Karori Reservoir (today the site of Zealandia), images of which seem almost obligatory in pictorial Wellington publications from this period. Their appearance was likely to be as much about promoting the city’s safe drinking water supply as it was their (dubious) scenic qualities. This was a time when the city was doing all it could to shake off its reputation from 15 years earlier when it was called the “worst drained city in the colony” and typhoid outbreaks were common. What is probably the most interesting page appears towards the end of the publication as part of an advertising feature. Inserted by the Government’s Department for Tourism and Health Resorts, this one-page advertisement targets those overseas who may have been sent a copy of the annual by friends or relatives in New Zealand.  It extols the scenic virtues of New Zealand with much made of the hunting & fishing opportunities and similar recreational pursuits which were often restricted to the upper classes back in the UK. It  promotes the country not only to tourists but also to potential migrants and highlights the world-leading progressive policies of the Liberal Government which was at its height at the time. This publication and similar magazines can now be read on Wellington City Recollect where you can also download individual pages at full resolution.