Next up we have a very special double bill — Simon himself and his son Oscar Sweetman. Simon will be reading from his collection The Death of Music Journalismp, while Oscar will be making his poetry reading debut. Have a listen below, and enjoy!

The death of music journalism / Sweetman, Simon
“Simon’s been writing poems since he was first listening to bands on his Walkman, but then he started sharing them via social media and open mic nights. Word got around and he was a sleeper hit at LitCrawl’s Lit-Sync For Your Life and the 2020 Variety for Fierys. Marking a pivot from the razor-sharp music writing he is best known for, Simon’s collection is as wide-ranging as his career to date. A natural storyteller whose poetry is filled with characters both famous and ordinary, this eagerly awaited collection is unpredictable, anarchic, playful and surprisingly heartfelt.” (Adapted from Catalogue)

“Simon Sweetman is a music journalist, short story writer and poet. He blogs at Off The Tracks. Simon was born in Hastings in 1976.”

From Simon’s profile on The Spinoff

You can find more of Simon’s music journalism over at offthetracks.co.nz

We’d like to extend our deepest gratitude to Simon for curating these daily poems, and to the lovely people at Book Haven for allowing us to record in their bookshop. We hope you enjoy Simon and Oscar’s wonderful work as much as we have! 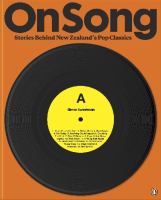 OnSong : stories behind New Zealand’s pop classics / Sweetman, Simon
“On Song is a lively journey through New Zealand’s diverse pop landscape. Prolific music journalist Simon Sweetman has interviewed the writers and performers of beloved Kiwi classics, presenting ‘in conversation’ text that illuminates the fascinating stories behind the pop songs we all know and love, all complemented with a plethora of artists’ personal imagery and archival photography. A stunning portrait of modern New Zealand through music.” (Catalogue)