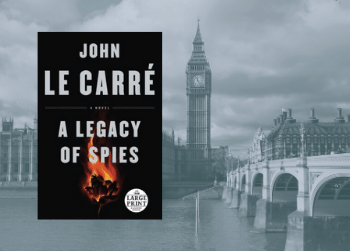 The more identities a man has, the more they express the person they conceal.

John le Carré, whose Cold War spy novels defined the period brilliantly — capturing the tensions and bleakness of the time — has died aged 89.

Born in 1931 as David Cornwell, he worked for the Secret Services (MI5 and MI6) in the 1950s and 60s. His first novel, Call for the dead, was pre-read and approved by the British Secret Service and introduced the world to the “breathtakingly ordinary … short, fat, and of a quiet disposition” George Smiley — famously played by Alec Guinness in the mini-series adaptations.

After the fall of the Iron Curtain, he turned his attention to the arms trade with The Night Manager, big pharma with The Constant Gardener, and the war on terror with Absolute Friends. His final novel was A Legacy of Spies.

In 2016, the usually media shy John le Carré surprised the world with a memoir, The Pigeon Tunnel, that talked openly and frankly about his difficult upbringing and what he perceived as his flaws. He will be remembered as a master storyteller by his legion of fans and admirers.

The pigeon tunnel : stories from my life / Le Carré, John
“What’s as good as reading a le Carré story? Reading le Carré’s life story, as told by the master himself. ‘Out of the secret world I once knew, I have tried to make a theatre for the larger worlds we inhabit. First comes the imagining, then the search for reality. Then back to the imagining, and to the desk where I’m sitting now.’ From his years serving in British Intelligence during the Cold War, to a career as a writer that took him from war-torn Cambodia to Beirut on the cusp of the 1982 Israeli invasion, to Russia before and after the collapse of the Berlin Wall and beyond.” (Adapted from Catalogue)

A most wanted man / Le Carré, John
” A half-starved young Russian man is smuggled into Hamburg at night. He has cash secreted in a purse round his neck. He is a devout Muslim. Or is he? He says his name is Issa. Annabel, a young German civil rights lawyer, determines to save Issa from deportation. Soon her client’s survival becomes more important to her than her own career.” (Adapted from Catalogue) Also available as an eBook and as a film .

The constant gardener / Le Carré, John
” Tessa Quayle, a brilliant and beautiful young social activist, has been found brutally murdered by Lake Turkana in Nairobi. The rumours are that she was faithless, careless, but her husband Justin, a reserved, garden-loving British diplomat, refuses to believe them. As he sets out to discover what really happened to Tessa, he unearths a conspiracy more disturbing, and more deadly, than he could ever have imagined. A blistering exposé of global corruption, The Constant Gardener is also the moving portrayal of a man searching for justice for the woman he has barely had time to love.” (Adapted from Catalogue) Also available as an eBook and as a film.

Call for the dead / Le Carré, John
“After a routine security check by George Smiley, civil servant Samuel Fennan apparently kills himself. When Smiley finds Circus head Maston is trying to blame him for the death, he begins his own investigation, meeting Fennan’s widow to find out what led him to such desperation. On the very day Smiley is ordered off the enquiry he receives an urgent letter from the dead man. Do the East Germans – and their agents – know more about this man’s death than the Circus previously imagined?Le Carre’s first book, Call for the Dead, introduced the tenacious and retiring spy George Smiley in a gripping tale of espionage and deceit.” (Adapted from Catalogue) Also available as an eBook.

The night manager / Le Carré, John
“A classic thriller, now repackaged in hardcover. Jonathan Pine agrees to stand up and be counted in the fight against a heart of darkness – the unholy alliance between the intelligence community and the secret arms trade. From the cliffs of west Cornwall via the Caribbean to the post-Noriega Panama, Pine chases his quarry – the worst man in the world.” (Catalogue) Also available as a DVD.

Absolute friends / Le Carré, John
” The friends of Absolute Friends are Ted Mundy, a British soldier’s son born in 1947 in a shining new independent Pakistan, and Sasha, refugee son of an East German Lutheran pastor and his wife who have sought sanctuary in the West. The two men meet first as students in riot-torn West Berlin of the late Sixties, again in the grimy looking-glass of Cold War espionage and, most terribly, in today’s unipolar world of terror, counter-terror and the war of lies.” (Adapted from Catalogue)

A legacy of spies / Le Carré, John
“Peter Guillam, staunch colleague and disciple of George Smiley of the British Secret Service, otherwise known as the Circus, is living out his old age on the family farmstead on the south coast of Brittany, when a letter from his old Service summons him to London. The reason? His Cold War past has come back to claim him. Intelligence operations that were once the toast of secret London, and involved such characters as Alec Leamas, Jim Prideaux, George Smiley and Peter Guillam himself, are to be scrutinized by a generation with no memory of the Cold War and no patience with its justifications.” (Adapted from Catalogue) Also available as an eBook.

Tinker, tailor, soldier, spy / Le Carré, John
“Smiley and his people are facing a remarkable challenge: a mole – a soviet double agent – who has burrowed his way in and up to the highest level of British Intelligence. His treachery has already blown some of their vital operations and their best networks. The mole is one of their own kind. But which one? His people are full-bodied, believable individuals, the minor characters as vivid as the main cast.” (Adapted from Catalogue) Also available as an eBook and a DVD.