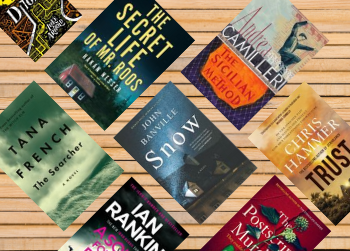 Writers always think their greatest work is just ahead of them.” — Ian Rankin

The crime genre has for a long time been one of those genres that really embraces an international perspective. A good crime novel from any part of the World will often find a ready willing and eager readership. And this month’s highlighted crime, thriller and mystery novels really demonstrate this, the list contains authors from Sweden, Italy, Scotland, Australia, America and Ireland. The tales included range from a New Inspector Rebus story where family and career collide set in Scotland, to an inspector Montalbano outing where the murder clues are in an Italian theatrical production from a Scandinavian lottery winner with a secret double life, to a crime caper set in a magical World. Enjoy.

Snow / Banville, John
“Detective Inspector St. John Strafford has been summoned to County Wexford to investigate a murder. A parish priest has been found dead in Ballyglass House, the family seat of the aristocratic, secretive Osborne family. The year is 1957 and the Catholic Church rules Ireland with an iron fist. Strafford–flinty, visibly Protestant and determined to identify the murderer–faces obstruction at every turn, from the heavily accumulating snow to the culture of silence in the tight-knit community he begins to investigate. As he delves further, he learns the Osbornes are not at all what they seem.” (Adapted from Catalogue)

The Sicilian method / Camilleri, Andrea
” Montalbano finds his answers to a murder in a theatrical play.Mimi Augello is visiting his lover when the woman’s husband unexpectedly returns to the apartment. Hurriedly, he climbs out the window and into the downstairs apartment, but from one danger to another. In the dark he sees a body lying on the bed. Shortly afterwards another body is found and the victim is Carmelo Catalanotti, a director of bourgeois dramas with a harsh reputation for the acting method he developed for his actors: digging into their complexes to unleash their talent, a traumatic experience for all. Are the two deaths connected? ” (Adapted from Catalogue)

The secret life of Mr Roos / Nesser, Håkan
“A man starts a double life after a secret lottery win. But he can’t know just how sour his new life will turn .Every day he travels down to this man-made oasis, returning each evening to his unsuspecting wife. Life couldn’t be better, until a young woman arrives in paradise .Anna Gambowska is a twenty-one-year-old recovering drug addict. On the run from the rehab centre she hated and an abusive relationship she can’t go back to, all Anna’s prayers are answered when she comes across a seemingly vacant hut in the Swedish woodland. Inspector Barbarotti doesn’t take much interest when a woman reports her husband as missing. That is, until a dead body is found near the missing man’s newly-bought hut, and Mr Roos becomes the number one murder suspect.” (Adapted from Catalogue)

Trust / Hammer, Chris
“Martin Scarsden’s new life seems perfect, right up until the moment it’s shattered by a voicemail: a single scream, abruptly cut off, from his partner Mandaly Blonde. Racing home, he finds an unconcious man sprawled on the floor and Mandy gone. Someone has abducted her. But who, and why? So starts a twisting tale of intrigue and danger, as Martin probes the past of the woman he loves, a woman who has buried her former life so deep she has never mentioned it. And for the first time, Mandy finds denial impossible, now the body of a mystery man has been discovered, a man whose name she doesn’t know, a man she was engaged to marry when he died. It’s time to face her demons once and for all; it’s time she learned how to trust” (Catalogue)

The searcher / French, Tana
” Cal Hooper thought a fixer-upper in a bucolic Irish village would be the perfect escape. After twenty-five years in the Chicago police force and a bruising divorce, he just wants to build a new life in a pretty spot with a good pub where nothing much happens. But when a local kid whose brother has gone missing arm-twists him into investigating, Cal uncovers layers of darkness beneath his picturesque retreat, and starts to realize that even small towns shelter dangerous secrets. THE SEARCHER is a gripping standalone novel from a singular writer who has been called “incandescent” by Stephen King, “absolutely mesmerizing” by Gillian Flynn, and “unputdownable” (People).” (Catalogue)

Dead man in a ditch / Arnold, Luke
” The name’s Fetch Phillips — what do you need? Cover a Gnome with a crossbow while he does a dodgy deal? Sure. Find out who killed Lance Niles, the big-shot businessman who just arrived in town? I’ll give it shot.  Help an old-lady Elf track down her husband’s murderer? That’s right up my alley. What I don’t do, because it’s impossible, is search for a way to bring the goddamn magic back. Rumors got out about what happened with the Professor, so now people keep asking me to fix the world. But there’s no magic in this story. Just dead friends, twisted miracles, and a secret machine made to deliver a single shot of murder.” (Adapted from Catalogue)

The postscript murders / Griffiths, Elly
“The death of a ninety-year-old woman with a heart condition should absolutely not be suspicious. DS Harbinder Kaur certainly sees nothing to concern her in carer Natalka’s account of Peggy Smith’s death. But when Natalka reveals that Peggy lied about her heart condition and that she had been sure someone was following her…And that Peggy Smith had been a ‘murder consultant’ who plotted deaths for authors, and knew more about murder than anyone has any right to…And when clearing out Peggy’s flat ends in Natalka being held at gunpoint by a masked figure…Well then DS Harbinder Kaur thinks that maybe there is no such thing as an unsuspicious death after all. ” (Catalogue)

A song for the dark times / Rankin, Ian
“‘He’s gone…’ When his daughter Samantha calls in the dead of night, John Rebus knows it’s not good news. Her husband has been missing for two days. Rebus fears the worst – and knows from his lifetime in the police that his daughter will be the prime suspect. He wasn’t the best father – the job always came first – but now his daughter needs him more than ever. But is he going as a father or a detective? As he leaves at dawn to drive to the windswept coast – and a small town with big secrets – he wonders whether this might be the first time in his life where the truth is the one thing he doesn’t want to find.. ” (Adapted from Catalogue)