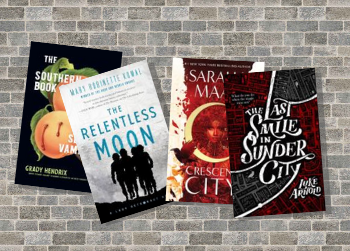 If there was any doubt that Science Fiction and Fantasy is one of the most dynamic, interesting and relevant genres in fiction at the moment then a quick look at some of the recent and upcoming releases will lay that doubt to rest.

Indeed this month’s releases proves this fact including three of the most eagerly anticipated Science Fiction titles of the year. Namely The relentless moon by Mary Robinette Kowal which continues her Nebula and Hugo award-winning Lady Astronaut series. Starborn & godsons by Larry Niven, Jerry Pournelle, and Steven Barnes the long awaited conclusion (twenty five years to be precise) to the Heorot series. And Sarah J. Maas first adult fantasy work House of Earth and Blood. Sarah will be better known to some readers for her exceptional young adult fantasy fiction works. Enjoy!

Below is just a highlighted selection, to see the full list of our newly acquired fiction this month click here.

The relentless moon / Kowal, Mary Robinette
“The Earth is coming to the boiling point as the climate disaster of the Meteor strike becomes more and more clear, but the political situation is already overheated. Riots and sabotage plague the space program. The IAC’s goal of getting as many people as possible off Earth before it becomes uninhabitable is being threatened. Elma York is on her way to Mars. Her friend and fellow Lady Astronaut Nicole Wargin is thrilled to be one of those pioneer settlers. But she is less happy that her husband, is considering a run for President.” (Adapted from Catalogue)

Starborn & godsons / Niven, Larry
” Avalon was thriving. The fast and cunning predators humans named “grendels” were under control, and the mainland outposts well established. Avalon’s new mainland hydroelectric power station was nearly complete. Humans would have power, and the ability to make all the necessities for life. They would survive. They would not survive as a spacefaring people. They were losing faster the ability to get to space. But unbeknownst to the planet-bound humans, something was moving out there in the stars. And its destination was Avalon. ” (Adapted from Catalogue)

House of Earth and Blood / Maas, Sarah J
“Bryce Quinlan had the perfect life–working hard all day and partying all night–until a demon murdered her closest friends, leaving her bereft, wounded, and alone. When the accused is behind bars but the crimes start up again, Bryce finds herself at the heart of the investigation. She’ll do whatever it takes to avenge their deaths. Hunt Athalar is a notorious Fallen angel, now enslaved to the Archangels he once attempted to overthrow. His brutal skills and incredible strength have been set to one purpose–to assassinate his boss’s enemies, no questions asked. ” (Catalogue) Also available as an eBook.

The southern book club’s guide to slaying vampires / Hendrix, Grady
” Patricia Campbell’s life has never felt smaller.The only thing keeping her sane is her book club, a close-knit group of Charleston women . One evening after book club, Patricia is viciously attacked by an elderly neighbor, bringing the neighbor’s handsome nephew, James Harris, into her life. But when children on the other side of town go missing, their deaths written off by local police, Patricia has reason to believe James Harris is more of a Bundy than a Brad Pitt. The real problem? James is a monster of a different kind .” (Catalogue) Also available as an eBook.

The book of Koli / Carey, M. R.
” The Book of Koli is the unforgettable story of a young boy struggling to find his place in a world where nature itself has turned against humanity. Beyond the walls of the small village of Mythen Rood lies an unrecognizable landscape. A place where overgrown forests are filled with choker trees and deadly seeds that will kill you where you stand. And if they don’t get you, one of the dangerous shunned men will.Koli has lived in Mythen Rood his entire life. He believes the first rule of survival is that you don’t venture too far beyond the walls. He’s wrong. ” (Adapted from Catalogue)

The new wilderness : a novel / Cook, Diane
“Bea’s five-year-old daughter, Agnes, is slowly wasting away, consumed by the smog and pollution of the overdeveloped metropolis that most of the population now calls home. If they stay in the city, Agnes will die. There is only one alternative: the Wilderness State, the last swath of untouched, protected land, where people have always been forbidden. Until now. Bea, Agnes, and eighteen others volunteer to live in the Wilderness State, guinea pigs in an experiment to see if humans can exist in nature without destroying it.” (Adapted from Catalogue) Also available as an eBook.

The last smile in Sunder City / Arnold, Luke
“Welcome to Sunder City. The magic is gone but the monsters remain.
I’m Fetch Phillips, just like it says on the window. There are a few things you should know before you hire me:
1. Sobriety costs extra.2. My services are confidential.3. I don’t work for humans.
It’s nothing personal–I’m human myself. But after what happened, to the magic, it’s not the humans who need my help..” (Adapted from Catalogue)

The city of a thousand faces / Dryden, Walker
“Tumanbay the most magnificent city on earth. The beating heart of a vast empire. A city of dreams – where those who arrived as slaves now reside in the seat of power. But the wheel of fate is never still: from the gilded rooftops to the dark catacombs, there are secrets waiting to be uncovered. For Gregor, Master of the Palace Guard, the work of rooting out spies and traitors is never done. His brother, the great General Qulan, must quell a distant rebellion. Whilst Shajah, chief wife to the Sultan, is suspicious that her new maid Sarah is not who she claims to be. And a mysterious stranger arrives with a gift for the Sultan himself.” (Adapted from Catalogue)

The faceless old woman who secretly lives in your home : a Welcome to Night Vale novel / Fink, Joseph
“In the town of Night Vale, there’s a faceless old woman who secretly lives in everyone’s home, but no one knows how she got there or where she came from…until now. Told in a series of eerie flashbacks, the story of The Faceless Old Woman goes back centuries . Interspersed throughout is a present-day story in Night Vale, as The Faceless Old Woman guides, haunts, and sabotages a man named Craig. In the end, her current day dealings with Craig and her swashbuckling history in nineteenth century Europe will come together in the most unexpected and horrifying way.” (Catalogue)