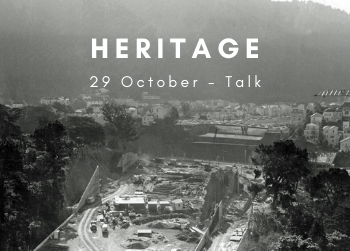 The relationship between a city and its motorways can be a complex one — and Wellington is no exception!

The same was true in 1965, when the imminent construction of the Wellington Urban Motorway was the defining issue of the local election. And for good reason: the motorway was — and still is — one of the largest and most complex works of infrastructure development in Wellington’s history, with hundreds of houses demolished and over 3600 graves disinterred from the Bolton Street Cemetery to make way for it.

Decades later, transport through Wellington is still a vitally important issue. But what can be learnt from this earlier attempt to ease congestion?

Join Wellington City Libraries’ Local and New Zealand History Specialist Gábor Tóth at 12pm on Thursday 29 October at Te Awe Library for a special talk on the history of the Wellington Urban Motorway project — including a powerful set of images taken at the time.

We look forward to seeing you there!