Here are some new movies & TV Shows recently added to our collection and available at our CBD Te Awe Library and selected Branch locations.

Photograph
“A struggling street photographer in Mumbai, pressured to marry by his grandmother, convinces a shy stranger to pose as his fiancée. The pair develop a connection that transforms them in ways they could not expect.” (Catalogue)

A White, White Day
“The powerful new film by Hlynur Plmason centres on a grieving police officer in rural Iceland (Ingvar E. Sigursson) who turns his vengeful sights on a neighbour he suspects may have had an affair with his now-deceased wife.” (Catalogue)

Shakespeare & Hathaway : private investigators. Season one.
“Private inspector Frank Hathaway has always worked alone. But Frank isn’t doing so well. He’s out of shape and low on cash. Frank needs a partner. Frank needs ex-hairdresser and people-person Lu. He just doesn’t know it yet. The two eventually join forces and form a highly unlikely and hugely entertaining detecting duo. Frank and Lu quickly discover that all is not as peaceful as it seems in their pretty theatre town. The mayor is murdered, vengeful lovers stalk the streets and a magician’s trick fatally misfires. Welcome to Stratford-upon-Avon, where low life criminals get caught up in deliciously high drama.” (Catalogue)

Ray Donovan. Season seven.
“While Ray makes progress in therapy, there are dangers from the past that require the Ray Donovan of old. Between NYC mayor Ed Feratti, an unrelenting NYPD officer hunting for the truth and clients old and new, Ray struggles to find the balance between fixing for clients and fixing himself. And when Feratti’s corruption brings a piece of Mickey’s past back to New York, Ray is forced to seek answers to long-buried questions.” (Catalogue)

Occupied. Series 3.
“A new parliamentary election is due, and the campaign reignites old conflicts between the Norwegians. Seeing himself as the liberator of Norway, interim Prime Minister Jesper Berg is confident of winning the election. But the public is divided. Who are the real liberation heroes? How should traitors be treated? How will relations with Russia develop? And has Russia actually withdrawn from Norway? To complicate matters, Jesper is confronted by a group of young eco-scientists desperate to remind him of his original reason for entering into politics: His deep commitment to clean energy. Ambassador to Norway, Sidorova is torn between her wish to start a new life in Norway and her loyalty to Russia. Security Services Director Hans Martin Djupvik investigates the assassination of former Prime Minister Anita Rygh. And Bente takes her daughter to Moscow to escape the prosecution of traitors.” (Catalogue)

Homecoming. Season one.
“Good intentions. Erratic bosses. Mounting paranoia. Unforeseen consequences spiralling out of control. Heidi (Julia Roberts) works at Homecoming, a facility helping soldiers transition to civilian life. Years later she has started a new life, when the Department of Defense questions why she left Homecoming. Heidi soon realises there’s a whole other story behind the one she’s been telling herself.” (Catalogue)

Tom Clancy’s Jack Ryan. Season two.
“In the second season after tracking a potentially suspicious shipment of illegal arms in the Venezuelan jungle, CIA Officer Jack Ryan heads down to South America to investigate. As Jack’s investigation threatens to uncover a far-reaching conspiracy, the President of Venezuela launches a counter-attack that hits home for Jack, leading him and his fellow operatives on a global mission spanning the United States, UK, Russia, and Venezuela to unravel the President’s nefarious plot.” (Catalogue)

His dark materials. The complete first season.
“A young girl is destined to liberate her world from the grip of the Magisterium, which represses people’s ties to magic and their animal spirits known as daemons.” (Catalogue) 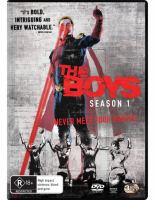 The boys. Season 1.
“The Boys is an irreverent take on what happens when superheroes – as popular as celebrities, as influential as politicians and as revered as gods – abuse their superpowers rather than use them for good. It is the powerless against the superpowerful as The Boys embark on a heroic quest to expose the truth about “The Seven” and their formidable Vought backing.” (Catalogue)

Belgravia. Season one.
“On the eve of the Battle of Waterloo, two young lovers forge a legacy that will create scandal for generations to come. Years later, when the humble Trenchards (Tamsin Greig and Philip Gleinster) move to Belgravia, they find themselves mixing with the venerated Brockenhursts (Harriet Walter and Tom Wilkinson). The families share a history that threatens inheritances and reputations and there are those who would do anything to ensure secrets remain buried. Pride and loyalty will be tested as forbidden love blossoms amongst the rivalry and lives hang in the balance.” (Catalogue)

Good girls. Season two.
“Good Girls Season 2 opens with Beth (Christina Hendricks) dealing with her failed plan to get Rio (Manny Montana) arrested, while evidence about their crimes end up on Agent Turner’s (James Lesure) desk. Throughout the season, Ruby (Retta) and Beth deal with the new status of their relationships with their husbands Stan (Reno Wilson) and Dean (Matthew Lillard), now aware of their secret criminal life; meanwhile, Annie (Mae Whitman) and her daughter have a hard time getting along. However, with the threat of a conviction looming over them, they can’t afford to make any mistakes with any of their activities.” (Catalogue)

Striking out. Complete series one & two.
“Tara Rafferty is a high-flying solicitor living an apparently charmed existence with her good-looking law-partner fiancé Eric. But when she discovers Eric is cheating on her with a colleague, she decides to go it alone and start her own law firm.” (Catalogue)

New Amsterdam. Season two
“Inspired by the oldest public hospital in America, this unique medical drama follows the brilliant and charming Dr. Max Goodwin, the institution’s newest medical director, who sets out to tear up the bureaucracy and provide exceptional care. How can he help? Not taking “no” for an answer. Dr. Goodwin must disrupt the status quo and prove he will stop at nothing to breathe new life into this understaffed, underfunded, and underappreciated hospital.” (Catalogue)

Elementary. The final season
“Having lied and confessed to a murder he did not commit in order to protect Watson, Holmes moves back home to London in order to avoid jail time, so Watson follows.” (Catalogue)