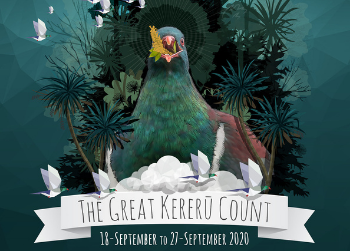 Of all the birds native to Aotearoa, there are none quite like the “gluttonous and glamorous” kererū. Famous for their drunken antics–as well as their appearance in numerous works of art–the kererū is a particularly popular bird, frequently gracing parks, forests and back gardens across the country.

However the life of a kererū is not all fame and fortune: they also play a vital role in New Zealand’s forests. Kererū are the only remaining species that can successfully disperse the seeds from some of our largest native trees, including tawa, taraire, pūriri and matai. Without kererū our forests would be in serious trouble.

Hence the importance of the Great Kererū Count! The Great Kererū Count is the largest citizen science project in the country, and has been running for the last four years. One of the great things about it is its simplicity: all you have to do is wait for the week of the count (this year it runs from 18-27 September), then count any kererū you see as part of timed surveys or chance encounters. From here you send your observations through to the people at Kererū Discovery and the Urban Wildlife Trust (options here) and you’re done!

Want more kererū fun in your life? Head along to the official Great Kererū Count website for a range of resources, and don’t forget to share and tag your kererū photos to go in to win some great prizes!

Which New Zealand bird? : a simple step-by-step guide to the identification of New Zealand’s native & introduced birds / Crowe, Andrew
“This book covers 98 endemic, native, introduced, or migrant bird species from all of the main habitats in New Zealand. Nine identification habitats feature four similar-looking birds with simple tips for telling them apart. Each bird receives a code, from 1-100, indicating how easy the bird is to find. There are also distribution maps for each bird.” (Adapted from Catalogue) 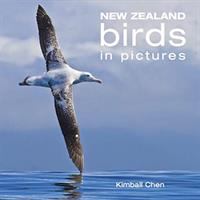 New Zealand birds in pictures / Chen, Kimball
“From the barely-visible wings of the flightless kiwi to the immense wingspan of the wandering albatross, New Zealand’s fragile island ecosystem is home to a diverse array of spectacular birds. Delve into the fascinating world of our feathered friends with author and wildlife photographer Kimball Chen.” (Adapted from Catalogue)

New Zealand bird calls / Moon, Lynnette
“Lynnette Moon gives 60 concise accounts of the country’s best-loved birds, covering their habitat, appearance and behaviour. A description of their calls, along with photographs from the magnificent collection of her late husband Geoff Moon completes an attractive, fact-filled and useful guide. 60 links to birds’ songs and calls, recorded in the wild by renowned wildlife sound recordist John Kendrick and prepared for this collection by Karen Baird of the Royal Forest and Bird Protection Society.” (Adapted from Catalogue)

Birds of New Zealand : a photographic guide / Scofield, R. Paul
“From the Kermadecs to Campbell Island, beloved endemics to passing vagrants, albatrosses and shearwaters to kiwi and kaka, Birds of New Zealand is the ultimate guide to this country’s extraordinary avian life. It is illustrated with almost 1000 new photographs and uses the latest information from birders and biologists to draw a definitive introduction to bird identification and behaviour.” (Adapted from Catalogue)

Birdstories : a history of the birds of New Zealand / Norman, Geoff
“A fascinating, in-depth account of New Zealand’s birds, which spans their discovery, their place in both Pākehā and Māori worlds, their survival and conservation, and the illustrations and art they have inspired. Geoff Norman covers a range of our bird families and individual species, and provides an up-to-date picture of how these birds are regarded by both Māori and Pākehā, the backstory of their discovery, and their current conservation status.” (Adapted from Catalogue)

New Zealand Geographic: NZ Geographic has been celebrating our people, places, wildlife and environment for two decades. Its archives hold more than 600 in-depth features about our country, natural history and culture.