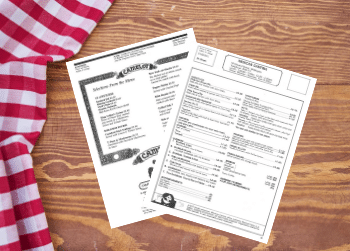 Today Wellingtonians are spoilt  for choice when it comes to dining out in the city with a huge range of different cuisines to try and restaurants which cover every  budget. But what was the restaurant scene like nearly 40 years ago? This booklet now on Wellington City Recollect gives you some idea as to what going out for dinner in Wellington was like in the early-mid 1980s.

Called The Menu Guide,  it was published in late 1982 by Henry Newrick and his firm Newrick Associates Ltd. Its cover price of $4.95 was relatively high for the time (approximately $18 in 2020 terms) but the booklet also included a set of discount coupons for diners to use at a selection of restaurants, one of the first times that a hospitality discount coupon scheme had been used in Wellington. A full and complete listing of almost every restaurant operating at the time was included in the introduction but establishments could pay to have a larger advertisement placed in the main body of the booklet in the form of a menu and it is these which offer a fascinating insight into our dining-out past.

This was at a time when traditional ‘family’ and ‘fine dining’ establishments started to be joined by new ‘ethnic’ restaurants as Wellingtonians’ culinary tastes expanded. Most of the fine dining restaurants were of course, French, while family restaurants all shared the common dominant theme of steak and chips.

Although the prices listed appear ridiculously low by today’s standards, how do they compare when inflation adjusted? The menu for Camelot, a popular family restaurant in Brandon Street which sported a ‘Ye Olde King Arthur’ theme, indicates that average prices were probably a bit higher than today; their $9.70 T-bone steak served with a mushroom sauce would be hitting $34 in 2020. Meanwhile, Des Britten’s legendary The Coachman offered grilled prawns at the eye-watering equivalent of $63. The Bacchus restaurant seemed to take the approach that if you needed to know their prices, you probably couldn’t afford to eat there (suffice to say that deep pockets were needed).

Though new ethnic cuisine restaurants were starting to appear, choice was still limited. Chinese restaurants serving a ‘Kiwi-fied’ version of Chinese food had been part of the city’s dining scene for generations, but these were now joined by Greek and Indian restaurants reflecting the long-standing presence of these ethnic communities in Wellington. South-east Asian eateries were virtually non-existent (the long-standing Indonesian restaurant Toko Baru being one of the few exceptions), middle-eastern restaurants were yet to be seen and it would be another decade before the doner kebab made its first appearance.

However, one new ethnic restaurant is included which really shook up the local scene; the Mexican Cantina in Edward Street. This gave many Wellingtonians their first taste of guacamole and nachos at a time when it wasn’t yet possible to buy corn chips or taco shells at the supermarket.  The ‘Mex’ took the approach of keeping their prices low, the food simple (though exotic to most taste-buds) and packing customers in. Popular with students, waiting crowds would often be spilling out the door while chugging on their B.Y.O supplies (alcohol licences were difficult and expensive to obtain for most restaurants). With no reservation system in place, groups would have to write their details on a blackboard and wait until their listing got to the top at which point their name would be yelled out over the noise of diners indicating their table was ready.

Possibly influenced by the success of the ‘Mex’, Manuel’s  — which operated out of the Broderick Inn in Johnsonville — also adopted a Mexican theme, but amusingly kept their menu as ‘family’ orientated as possible with not a pinch of cumin, dollop of sour cream or a kidney bean to be seen…