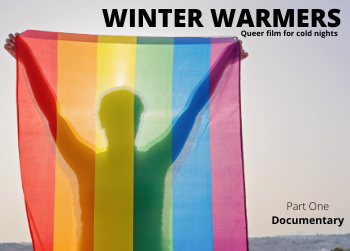 As International Pride Month draws to a close and the weather outside gets a little colder, there’s no better time to snuggle up, sip a warm beverage, and enjoy some excellent queer cinema from around the world.

Your WCL membership provides access to streaming video services, which host a cornucopia of cinematic delights. You can find out more about how to access these online video options on our eLibrary page.

In this first edition of our #WinterWarmers Queer Film Fest, our staff have collated some of our favourite documentaries. Stay tuned for part two, later this week, when we will share our picks of the finest fictional features from around the world.

Georgina Beyer is a transgender woman and former sex-worker who was elected to the New Zealand Government by a largely white, rural electorate. Georgie Girl traces Georgina Beyer’s colorful path — her rural past, born as George and raised on a farm, through periods of drug use and sex work, to her election in 1999 into national office under Labour Government headed by Helen Clark. Georgina, who is of Māori descent, has been an inspiration to many, an example of a courageous individual who overcame adversity, marginalization and discrimination.-Kanopy

The Early Works of Cheryl Dunye

Vilified by conservatives in Congress, defended by major newspapers, and celebrated by audiences and festivals around the world as one of the most provocative, humorous and important filmmakers of our time, Cheryl Dunye practically invented a new form of cinema – call it the ‘Dunyementary.’ Presented here are the films that started it all – the early works which gave birth to an extraordinary and original filmmaking talent. Made with great creativity on often miniscule budgets, they represent the first chapter of the Cheryl Dunye oeuvre. Films in this collection include Greetings from Africa, The Potluck and the Passion, An Untitled Portrait, Vanilla Sex, She Don’t Fade, and Janine.-Kanopy

I Am Not Your Negro

Haitian filmmaker Raoul Peck (The Man by the Shore, Moloch Tropical, Murder in Pacot), returns with a transcendent documentary examining the life and work of literary iconoclast and queer icon James Baldwin. The Oscar-nominated “I Am Not Your Negro” is based on Baldwin’s unfinished manuscript “Remember This House”, a stirring, personal account of the lives and deaths of his friends and US Civil Rights Movement leaders Medgar Evers, Malcolm X and Martin Luther King Jr. Through these accounts, Baldwin’s considered yet razor-sharp activism bears witness to the impact and legacy of race in America, which forms the focus of Peck’s cinematic dissection of the enduring effects of social and racial inequality.-Beamafilm

Tales of the Waria

Indonesia is home to the world’s largest Muslim population. It is also home to the “warias,” a community of biological men who live openly as women. In this eye-opening documentary, four warias search for romance and intimacy. They encounter a host of obstacles– family pressures, economic burdens, aging– but strive to stay true to themselves and to find lasting companionship. Shot over three years with the local queer community serving as story consultants and film crew members, the film provides an unprecedented look into topics rarely discussed in Western media: Indonesia, Islamic culture, and the daily life and struggles of transgender communities around the world.-Kanopy

Mind/Game’s portrait of “the female Michael Jordan,” from troubled family life to basketball superstardom, reveals a long-hidden battle with mental illness. But even as Holdsclaw begins to embrace her emotional challenges and emerge as an outspoken mental health advocate, she encounters new obstacles to her own recovery. Narrated by Glenn Close.-Kanopy

Watch the full film here on Kanopy.
Imagine a world where a little boy can grow up to be the woman of his dreams, and a young girl can rise to become a leader among men. Welcome to Kumu Hina’s Hawai’i. During a momentous year in her life in modern Honolulu, Hina Wong-Kalu, a native Hawaiian mahu, or transgender, teacher uses traditional culture to inspire a student to claim her place as leader of the school’s all-male hula troupe. But despite her success as a teacher, Hina longs for love and a committed relationship. Will her marriage to a headstrong Tongan man fulfill her dreams? An incredible docu-drama that unfolds like a narrative film, Kumu Hina reveals a side of Hawai’i rarely seen on screen. -Kanopy

View all posts by Alex M