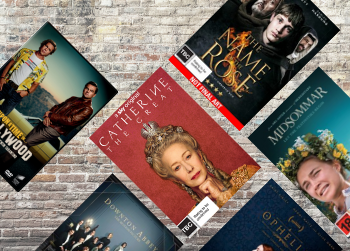 Catherine the Great.
Description: An epic and romantic drama about the power, politics, and passions of the legendary monarch Oscar winner ® Dame Helen Mirren (The Queen) stars as one of the greatest rulers in history, the legendary mother of the Russian Empire. Amid scandal, intrigue and immense conflict, Russian empress Catherine the Great (Helen Mirren) develops a unique and devoted relationship with Grigory Potemkin (Jason Clarke, Windchester) as they overcome their adversaries and serve as the architects of modern-day Russia. (Mightyape.co.nz)

The name of the rose.
“Summary: Italy, 1327. The Franciscan monk, William of Baskerville (John Turturro, O Brother, Where Art Thou?) and his novice Adso von Melk (Damian Hardung, The Most Beautiful Girl In The World) arrive at a secluded monastery in the Alps, where they become witnesses to a series of mysterious murders. While Baskerville and Melk investigate and search for the killer, they are hunted themselves by the merciless inquisitor Bernard Gui (Rupert Everett, Hysteria), who prosecutes those who criticise the Pope. Gui sets out to terminate the Franciscan Order and so, Baskerville is on the top of his list.” (Catalogue)

Once upon a time in… Hollywood
“Summary: From 1958 to 1963, American actor Rick Dalton knew the height of fame and fortune as the lead in the television series Bounty Law. Yet, Rick wasn’t satisfied with the work and used his popularity to try to become a movie star. By 1969, Rick’s career has stalled so much that he takes jobs as a guest star on various shows. He even starts wondering if the only way he can make a comeback is by acting in Italian productions. Cliff Booth, Rick’s long-time friend and stunt double, helps him see that possibilities for success still exist in the Los Angeles film industry if they work together.” (Catalogue)

Midsommar
“A young woman reluctantly joins her boyfriend on a summer trip to a Swedish festival where things quickly go awry.” (Catalogue)

Downton Abbey : the motion picture
“Summary: The beloved characters of Downton Abbey take to the big screen, and it turns out that they’ve got a major event to prepare for. After all, it’s not every day that royalty makes an appearance. Of course, it’s not long before tensions are running high. The property isn’t even close to ready when it becomes clear that Carson the butler will need to come out of retirement to help run this sinking ship before it’s too late.” (Catalogue)

Ophelia.
“Summary: The unspoken, complex heroine of Hamlet shares her own story through modern language in contemporary Denmark. As a rebellious and motherless child, Ophelia is taken into Elsinore Castle by Queen Gertrude as one of her most trusted ladies-in-waiting. Soon enough, Ophelia captures the affections of the young Prince Hamlet. A passionate romance kindles between the two in secret as the kingdom is on the brink of war amidst its own political intrigue and betrayal. When Hamlet’s father is murdered and the prince’s wits begin to unravel into an insatiable quest for vengeance, Ophelia sharply navigates the rules of power in Denmark all while struggling to choose between her true love and her own life.” (Catalogue)

Judy
“It’s the winter of 1968 and showbiz legend Judy Garland arrives in London to perform a five-week sold-out run at The Talk of the Town. It has been 30 years since she shot to stardom in The Wizard of Oz, but though her voice has weakened, its dramatic intensity has grown. As she prepares for the show, fights with management, and reminisces with friends and fans, her wit and warmth shine through. She also embarks on a whirlwind romance with Mickey Deans, her soon-to-be fifth husband.” (Catalogue)

Hustlers
“Summary: Inspired by a true story, Hustlers follows Destiny, a young stripper struggling to make ends meet. That is, until she meets Ramona, the club’s savvy top earner, who shows her the way toward making big bucks. But when the 2008 economic collapse hits their Wall Street clientèle hard, Destiny and Ramona concoct a plan with their fellow strippers to turn the tables on these greedy power players in this wild, modern-day Robin Hood.” (Catalogue)

The goldfinch
“Theodore ‘Theo’ Decker was thirteen years old when his mother was killed in a bombing at the Metropolitan Museum of Art. The tragedy changes the course of his life, sending him on a stirring odyssey of grief and guilt, reinvention and redemption, and even love. Through it all, he holds on to one tangible piece of hope from that terrible day, a painting of a tiny bird chained to its perch.” (Catalogue)

Years and years. Season 1
“Summary: “Follow the Lyons, a busy Manchester family. Daniel’s getting married to Ralph. Stephen and Celeste worry about their kids. Rosie’s chasing a new fella. Edith has not been home for years. All presided over by Gran, the imperial Muriel. But when their lives all converge on one crucial night in 2019, the story accelerates into the future, following the lives and loves of the Lyons over the next 15 years”–Container.” (Catalogue)