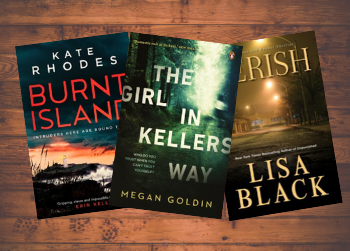 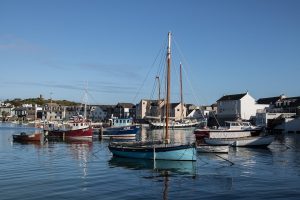 How do you find a murderer on an island of just 80 people when everyone’s a potential suspect? That’s the challenge for Deputy Chief of Police Ben Kitto in Burnt Island, the latest work from the award-winning writer Kate Rhodes.

Burnt Island / Rhodes, Kate
“As the sun sets on a cold November evening, the tiny community of St Agnes prepares for their annual Fifth-of-November festivities. Moments before the fireworks are scheduled to commence, an islander discovers a charred body, and quickly it becomes clear that a killer is at large. Ben Kitto is the Deputy Chief of Police for the Scilly Isles, and with a killer on the loose, he has no choice but to forbid all residents from leaving the island. With a population of just eighty people, everyone is a suspect and no one is safe.” (Adapted from Catalogue)

The girl in Kellers Way / Goldin, Megan
“When a body is found buried near Kellers Way, Detective Melanie Carter must identify the victim if she is to have any chance of finding the killer. That’s no easy task with fragmentary evidence from a crime committed years earlier and a conspiracy of silence. The one person who may be able to help is Julie West. In a troubled marriage, Julie often jogs along Kellers Way to clear her mind and escape the confines of her suffocating suburban life. Until one day, something happens there that shakes Julie to the core.” (Adapted from Catalogue)

Perish / Black, Lisa
“The scene of the crime is lavish but gruesome. In a luxurious mansion on the outskirts of Cleveland, a woman’s body lies gutted in a pool of blood on the marble floor. The victim is Joanna Moorehouse, founder of Sterling Financial. The killer could be any one of her associates. Maggie knows that to crack the case, she and Jack will have to infiltrate the cutthroat world of high-stakes finance. But the offices of Sterling Financial seethe with potential suspects, every employee hellbent on making a killing.” (Adapted from Catalogue)

Sorry for the dead / Upson, Nicola
“In the summer of 1915, the sudden death of a young girl brings grief and notoriety to Charleston Farmhouse on the Sussex Downs. Years later, Josephine Tey returns to the same house–now much changed–and remembers the two women with whom she once lodged as a young teacher during the Great War. As past and present collide, with murders decades apart, Josephine is forced to face the possibility that the scandal which threatened to destroy those women’s lives hid a much darker secret.” (Adapted from Catalogue)

Night train to murder / Green, Simon R.
“When Ishmael Jones is asked to escort a VIP on the late-night train to Bath, it would appear to be a routine case. Ishmael’s mission is to ensure that he arrives safely. But when a body is discovered in a locked toilet cubicle, Ishmael Jones has just 56 minutes to solve a seemingly impossible crime before the train reaches its destination. How could anyone orchestrate a murder in a crowded railway carriage without being noticed–and with no obvious means of escape?” (Adapted from Catalogue)

The man that got away / Truss, Lynne
“1957: In the beach town of Brighton, music is playing and guests are sunning themselves, when a young man is found dead, dripping blood, in a deck chair. Constable Twitten has a hunch that the fiendish murder may be connected to a notorious nightspot, but his colleagues are-as ever-busy with other more important issues. As the case twists and turns, Constable Twitten must find the murderer and convince his colleagues that there’s an evil mastermind behind Brighton’s climbing crime rate.” (Adapted from Catalogue)

A death at the Hotel Mondrian / Jager, Anja de
“When Lotte Meerman is faced with the choice of interviewing the latest victim in a string of assaults or talking to a man who claims he really isn’t dead, she picks the interview. After all, the man cannot possibly be who he claims he is: Andre Nieuwkamp was murdered as a teenager over thirty years ago. Yet concerned about this encounter, Lotte goes to the Hotel Mondrian the next day to talk to the man, but what she finds instead is his corpse . . .” (Adapted from Catalogue)