A very highly recommended book heads up our list for this time: How to walk a dog. This is followed by books about Christmas, just in time for Christmas.

How to walk a dog / White, Mike
“Mike White began walking his SPCA-rescue huntaway, Cooper, at Wellington’s dog parks ten years ago, and since then has become part of a remarkable community of people and their pets. Written with wit, wisdom and heartbreaking poignancy, How to Walk a Dog is a story anyone who has ever owned or loved a dog, will relate to. You will laugh, you will cry, and you will learn some of the secrets of living with a dog. Illustrated with line drawings from acclaimed cartoonist Sharon Murdoch.” (Summary, from Catalogue)

Last Christmas : memories of Christmases past and hopes for future ones
“When you think back to Christmases past, what (if anything) made it magical? Looking towards the future, what would your perfect Christmas be? What would you change? This is a beautiful, funny and soulful collection of personal essays about the meaning of Christmas. This gem of a book (is) introduced and curated by Emma Thompson and Greg Wise (and) celebrates the importance of kindness and generosity, acceptance and tolerance – and shows us that these values are not just for Christmas.” (Catalogue) 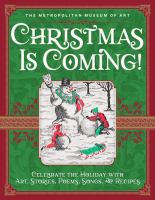 Christmas is coming! : celebrate the holiday with art, stories, poems, songs, and recipes.
“From The Metropolitan Museum, this Christmas treasury of stories, poems, recipes, and songs is sure to light up the holiday season. It’s the most wonderful time of the year, and this richly illustrated treasury celebrates everything there is to love about the holiday season! All the artwork is from the Metropolitan Museum of Art’s collection.” (adapted from Catalogue)

The government of no one : the theory and practice of anarchism / Kinna, Ruth
“Anarchism routinely gets a bad press. It’s usually seen as meaning chaos and disorder — or even nothing at all. And yet, from Occupy Wall Street to Pussy Riot, Noam Chomsky to David Graeber, this philosophical and political movement is as relevant as ever. Contrary to popular perception, different strands of anarchism — from individualism to collectivism — do follow certain structures and a shared sense of purpose: a belief in freedom and working towards collective good without the interference of the state.” (adapted from Catalogue)

Money : myths, truths and alternatives / Mellor, Mary
“In this highly topical book, Mary Mellor, an expert on money, examines money’s social, political and commercial histories to debunk longstanding myths such as money being in short supply and needing to come from somewhere. Arguing that money’s immense social value means that its creation and circulation should be a matter of democratic choice, she sets out a new finance system, based on green and feminist concerns, to bring radical change for social good.” (Catalogue)

The compatriots : the brutal and chaotic history of Russia’s exiles, emigrés, and agents abroad / Soldatov, Andreĭ
“The history of Russian espionage is soaked in blood, from a spontaneous pistol shot that killed a secret policeman in Romania in 1924 to the attempt to poison an exiled KGB colonel in Salisbury, England, in 2017. Russians began leaving the country in big numbers in the late nineteenth century creating the third-largest diaspora in the world. The exodus created a rare opportunity for the Kremlin. Moscow’s masters and spymasters fostered networks of spies, many of whom were emigrants driven from Russia.”(adapted from Catalogue)

24/6 : the power of unplugging one day a week / Shlain, Tiffany
“Internet pioneer and renowned filmmaker Tiffany Shlain takes us on an entertaining journey into a strategy for living in our 24/7 world: turning off all screens for 24 hours each week. She and her family call it “Technology Shabbat.” This weekly practice, which they’ve done for nearly a decade with their kids (16 & 10), has completely changed their lives, giving them more time, productivity, connection, and presence.” (adapted from Catalogue)

Childfree by choice : the movement redefining family and creating a new age of independence / Blackstone, Amy
“Amy Blackstone, a professor of sociology, has been studying the childfree choice since 2008, a choice she and her husband had already confidently and happily made. Using her own and others’ research as well as her personal experience, Blackstone delves into the childfree movement from its conception to today, as she strips away the misconceptions surrounding non-parents and reveals the still radical notion that support of the childfree can lead to better lives and societies for all.” (adapted from Catalogue) 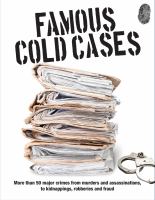 Famous cold cases : more than 50 major crimes from murders and assassinations, to kidnappings, robberies and fraud / Wright, John D.
“Jack the Ripper and the Zodiac Killer. The kidnapping of little Madeleine McCann. The 22 million robbery of the British Bank in Beirut. What all these have in common is they’re cold cases: investigators have closed the file because they’re out of leads. Famous Cold Cases presents more than 50 of these unsolved or recently solved crimes in a dossier format.” (adapted from Catalogue)

What we’re fighting for now is each other : dispatches from the front lines of climate justice / Stephenson, Wen
“In 2010, journalist Wen Stephenson woke up to the true scale and urgency of the catastrophe bearing down on humanity, starting with the poorest and most vulnerable everywhere, and confronted what he calls “the spiritual crisis at the heart of the climate crisis.” Inspired by others who refused to retreat into various forms of denial and fatalism, he walked away from his career in mainstream media and became an activist, joining those working to build a transformative movement for climate justice in America.” (adapted from Catalogue) 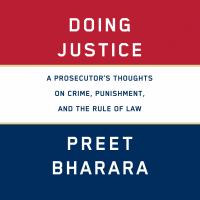 Doing justice : a prosecutor’s thoughts on crime, punishment, and the rule of law / Bharara, Preet
“By the one-time federal prosecutor for the Southern District of New York, an important overview of the way our justice system works, and why the rule of law is essential to our society. Using case histories, personal experiences and his own inviting writing and teaching style, Preet Bharara shows the thought process we need to best achieve truth and justice in our daily lives and within our society.” (adapted from Catalogue)