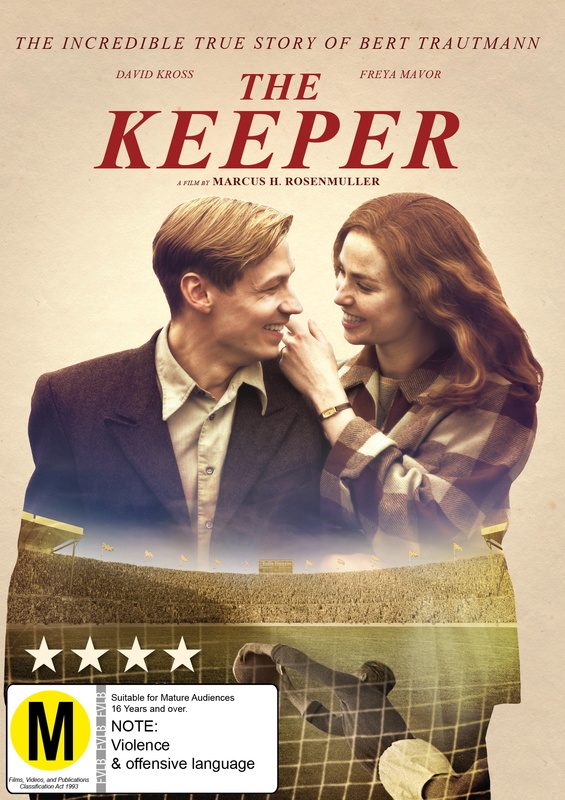 New DVDs for December include the new Fast & furious spin off; the true life story of famed Manchester United goalkeeper Bert Trautmann; a hit Amazon Prime show starring Michael Sheen and David Tennant, based on the Book by Terry Pratchett and Neil Gaiman; a remake of the classic Lion King story; and the critically acclaimed mini-series Chernobyl.

Fast & furious. Hobbs & Shaw
“Ever since hulking lawman Hobbs, a loyal agent of America’s Diplomatic Security Service, and lawless outcast Shaw, a former British military elite operative, first faced off, the duo have swapped smack talk and body blows as they’ve tried to take each other down. But when anarchist Brixton gains control of an insidious bio-threat that could alter humanity forever, these two sworn enemies will have to partner up to bring down the only guy who might be badder than themselves.” (Summary, Catalogue)

The keeper
“While visiting a PoW camp near Manchester at the end of WWII, Margaret Friar, the daughter of the manager of the local football team, notices young German soldier Bert Trautmann. Her father is so taken by Bert’s prowess as a goal-keeper that he gets him out of the camp to play for his local team. Margaret and Bert’s love blossoms despite local hostility and resentment of the German PoWs. In the meantime, Bert’s heroics in goal are noticed by Manchester’s City Football Club. Rather than going back to Germany like nearly all the other camp inmates, Bert marries Margaret and signs for Man City.” (adapted Summary from Catalogue)

Good omens
“Aziraphale is a fussy angel. Crowley is a loose-living demon. They’ve both been on Earth for over 6,000 years. During that time they’ve grown quite fond of it, and, against all odds, each other. But there’s a problem – the Antichrist has arrived here on Earth, which means the world they have become too fond of will end in flames, if they don’t manage to save it. This wildly imaginative and gloriously funny drama follows Aziraphale and Crowley as they join forces in an attempt to find an 11-year-old Antichrist (and his dog) and avert the Apocalypse. Armageddon is coming – but it doesn’t have to be the end of the world.” (Product description, Amazon.co.uk)

Late night
“After almost 30 years, legendary talk-show host Katherine Newbury suspects she may soon be losing her spot on late-night television unless she makes a game-changing transformation. Making gender equality her goal, she impulsively hires Molly Patel, a chemical plant efficiency expert, as the first and only female on her writing staff. Molly urges her to make the show more contemporary, authentic, and personal, a move that could make Molly’s career or send her back to the chemical plant for good.” (summary from Catalogue)

Garage sale mystery. Murder in D minor.
“Jennifer Shannon has a gift for finding rare treasures hidden in garage sales that she can resell at her consignment store, Rags to Riches. But her keen eye for finding valuables also gets her involved in the criminal investigations that happen at the very second-hand sales she frequents. In “Murder in D Minor”, Jennifer wins the bid on a vintage self-playing piano at an estate auction. The piano was owned by the late Carl Deats and Jennifer discovers that this wealthy philanthropist has a dark history.” (Catalogue)

The lion king
“After the murder of his father, a young lion prince flees his kingdom only to learn the true meaning of responsibility and bravery.” (Catalogue)

Chernobyl : a 5-part miniseries.
“Jared Harris (The Crown, Mad Men), Stellan Skarsgård (Breaking the Waves, Good Will Hunting) and Emily Watson (Breaking the Waves, Apple Tree Yard) star in Chernobyl, the critically acclaimed five-part mini-series. On April 26, 1986, the Chernobyl Nuclear Power Plant in Ukrainian SSR suffered a massive explosion that released radioactive material across Belarus, Russia and Ukraine and as far as Scandinavia and Western Europe. Dramatising the true story of the 1986 nuclear accident, one of the worst man-made catastrophes in history, Chernobyl shines a light on the brave men and women who fought an unprecedented war against an invisible enemy, and who suffered and sacrificed, saving millions of lives, often at the cost of their own.” (Product Description, Amazon.co.uk)

Little Woods
“Ollie is barely getting by in Little Woods, an economically depressed fracking boomtown in North Dakota. She has left her days of illegally running prescription pills over the Canadian border behind, eying a potential new job that would finally break her out of the small town. But when her mother dies, she is reunited with her estranged sister Deb, who faces a mounting crisis: the combined effect of an unplanned pregnancy and a deadbeat ex.” (Catalogue)

High life
“Monte and his baby daughter are the last survivors of a damned and dangerous mission to deep space. The crew, death row inmates led by a doctor with sinister motives, has vanished. As the mystery of what happened onboard the ship is unraveled, father and daughter must rely on each other to survive as they hurtle toward the oblivion of a black hole.” (Summary from Catalogue)

Game of thrones. Season 8.
“The final season depicts the culmination of the series’ two primary conflicts: the great battle at Winterfell against the Army of the Dead, and the final battle in King’s Landing for control of the Iron Throne.” (Mightyape.co.nz)

The farewell.
“In this funny, uplifting tale based on an actual lie, Chinese-born, U.S.-raised Billi (Awkwafina) reluctantly returns to Changchun to find that, although the whole family knows their beloved matriarch, Nai-Nai, has been given mere weeks to live, everyone has decided not to tell Nai Nai herself. To assure her happiness, they gather under the joyful guise of an expedited wedding.” (adapted from Description, mightyape.co.nz)