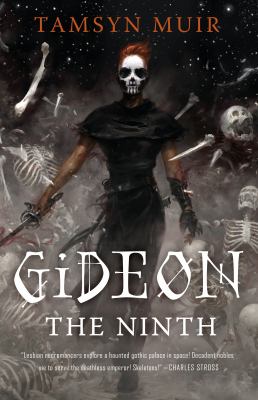 New tales in science fiction and fantasy and delving into the vaults.  Wheel of time fans have a pre Wheel of time Robert Jordan, a.k.a. James Oliver Rigney, Jr. title to revel in. Becky Chamber’s new novella explores the potential for space exploration, boundaries expand as humans are adapted to their new environments before they arrive, but what is the fate of the homeworld they leave behind?

The confines of linear time and lifespan are challenged in Joe Abercrombie’s A little hatred and Tamsyn Muir’s Gideon the ninth. The Lightbringer series concludes with Brent Weeks’ The burning white. Nine years from start to finish this epic saga of magic, lies and betrayals has seen it’s characters transform as the world they know evolves around them. So who is the Lightbringer?

To be taught if fortunate / Chambers, Becky
“In the future, instead of terraforming planets to sustain human life, explorers of the galaxy transform themselves.  Ariadne and her fellow crewmates sleep while in transit, and wake each time with different features. But as they shift through both form and time, life back on Earth has also changed. Faced with the possibility of returning to a planet that has forgotten those who have left, Ariadne begins to chronicle the wonders and dangers of her journey, in the hope that someone back home might still be listening.” (Adapted from catalogue)

Warrior of the Altaii / Jordan, Robert (print), (eBook)
“Draw near and listen, or else time is at an end. The watering holes of the Plain are drying up, the fearsome fanghorn grow more numerous, and bad omens abound. Wulfgar, a leader of the Altaii people, must contend with twin queens, warlords, prophets, and magic in hopes of protecting his people and securing their future. This is Robert Jordan’s never-before-published first novel, which he wrote before his well-known Wheel of Time series.” (Adapted from catalogue)

A little hatred / Abercrombie, Joe
“The age of the machine dawns, but the age of magic refuses to die. With the help of the Long Eye glimpsing the future is one thing, but with the guiding hand of the First of the Magi still pulling the strings, changing it will be quite another. Old scores run deep as ever. On the blood-soaked borders of Angland, Leo dan Brock struggles to win fame on the battlefield. Savine dan Glokta plans to claw her way to the top of the slag-heap of society by any means necessary and the slums boil over with a rage that all the money in the world cannot control.” (Adapted from catalogue)

Gideon the ninth / Muir, Tamsyn (print), (eBook)
“Brought up by unfriendly, ossifying nuns, ancient retainers, and countless skeletons, Gideon is ready to abandon a life of servitude and an afterlife as a reanimated corpse.  But her childhood nemesis won’t set her free. Harrowhark Nonagesimus, Reverend Daughter of the Ninth House, has been summoned into action. If Harrowhark succeeds she will be become an immortal, all-powerful servant of the Resurrection, but no necromancer can ascend without their cavalier. Without Gideon’s sword, Harrow will fail, and the Ninth House will die. Of course, some things are better left dead.” (Adapted from catalogue)

The burning white / Weeks, Brent
“In the stunning conclusion to the epic, Lightbringer series by Brent Weeks, kingdoms clash as Kip must finally escape his family’s shadow in order to protect the land and people he loves. As the White King springs his great trap, and the Chromeria itself is threatened by treason and siege, Kip Guile and his companions will scramble to return for one impossible final stand. In the darkest hour, will the Lightbringer come? (Adapted from catalogue)

The cruel stars / Birmingham, John
“Centuries after their defeat, the Sturm have returned with an overwhelming attack on the fringes of human space.  Everybody thought the Sturm were dead, engulfed by the Dark. They were wrong. On the brink of annihilation, humankind’s only hope is a few brave souls who survived the initial onslaught. Five flawed, reluctant heroes must band together to prevail against a relentless enemy and near-impossible odds. For if they fail, the future itself is doomed.” (Adapted from catalogue)

Season of storms / Sapkowski, Andrzej
Translated from original Polish by David French
“Geralt of Rivia is a Witcher, one of the few capable of hunting the monsters that prey on humanity. A mutant who is tasked with killing unnatural beings. He uses magical signs, potions, and the pride of every Witcher – two swords, steel and silver. But a contract has gone wrong, and Geralt finds himself without his signature weapons. Now he needs them back, because sorcerers are scheming, and across the world the  season of storms is coming…” (Adapted from catalogue)

Knight / Zahn, Timothy (print, (eBook)
“Nicole Hammond was just trying to survive on the streets of Philidelphia, then she and her partner Bungie were abducted by a race of mysterious moth-like aliens and taken to a strange ship. Now she is a Sibyl, a special human that has the ability to communicate with the aliens and their ship. Competing factions control different parts of the ship with the humans and other sentient aliens caught in the middle. But Nicole has a plan to take control of the ship. She just has to outsmart war profiteers and slavers to do it.” (Adapted from catalogue)