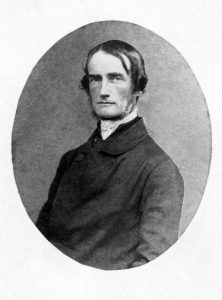 Wellington City Libraries is proud to launch an online, digitised collection of correspondence from one of New Zealand’s most significant missionaries and supporters of Māori rights, Octavius Hadfield.

These original letters and diary extracts were gifted to Wellington City Libraries by his daughter, Amelia Caroline Hadfield, in 1951 and are now easily available to read for the first time as part of our heritage database, Wellington City Recollect.

Hadfield arrived in New Zealand shortly before the signing of the Treaty of Waitangi and soon made his way to Kāpiti. There he befriended Te Rauparaha and was able to prevent the great warrior making a retalitory attack on Wellington following the Wairau ‘Affray’ of 1843. Te Rauparaha and his son Tāmihana later encouraged Hadfield to establish the Rangiātea church in Otaki. He worked closely with Māori communities, introducing them to farming to allow them to engage with the settler economy and became a fierce critic of the NZ Government because of their actions in causing the NZ Wars. Despite many Europeans turning against him and even accusing him of treason, in 1870 Hadfield became the second Bishop of Wellington and then in 1890 he was elected to head the Anglican Church as Primate of New Zealand.

These letters are amoung our most valuable taonga and offer a fascinating insight into the mind and thinking of one of the greatest New Zealanders of the colonial period. Each document includes a full transcription.

Discover these taonga and more on Recollect .