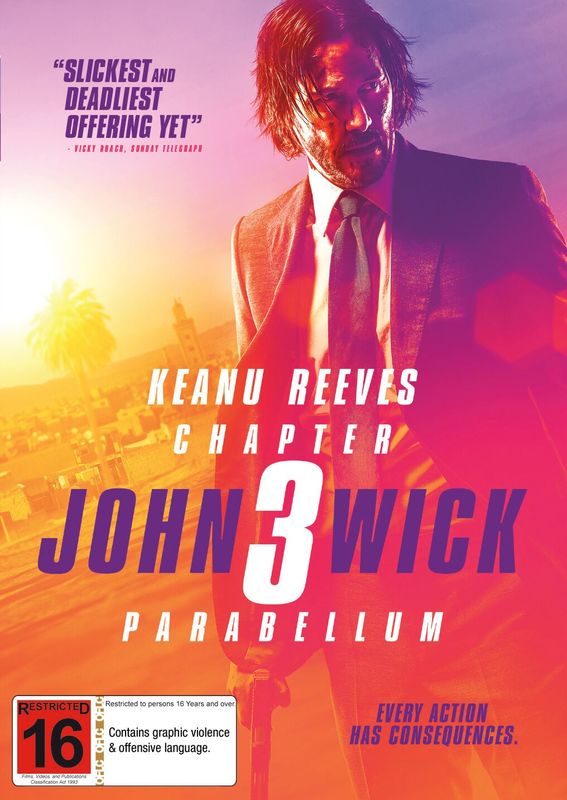 New DVDs for November include the latest entry in the action packed ‘John Wick’ series; moody Crime with the return of ‘True Detective’; a brilliant re-imagining of the classic novel ‘The haunting of Hill House’; uplifting music drama with ‘Wild Rose’; and a biopic on the formative years of the renowned creator of Middle Earth.

John Wick. 3, Parabellum
“Super assassin John Wick has a fourteen million dollar price tag on his head after killing a member of the High Table, the shadowy international assassins’ guild. Now excommunicado, and with an army of the world’s most ruthless hit men and women on his trail, John must find a way to survive in this third chapter of the adrenaline-fuelled action series.” (Catalogue)

MIB. International
“The team has always protected the Earth from the scum of the universe, but in this new adventure, they tackle their biggest, most global threat to date: a mole in the organization.” (Catalogue)

Spider-Man. Far from home
“Still in mourning for his mentor, Peter Parker decides to join his best friends Ned, MJ, and the rest of the gang on a European vacation as a way to reset. However, when Nick Fury hunts him down for help defeating Elemental creatures from the future, he has to keep the appearance of being a regular student while fighting alongside a new superhero from the future: Mysterio.” (Catalogue)

Tolkien
“Explores the formative years of the renowned author’s life as he finds friendship, courage, and inspiration among a fellow group of writers and artists at school. Their brotherhood strengthens as they grow up and weather love and loss together, including the author’s tumultuous courtship of his beloved Edith Bratt, until the outbreak of the First World War which threatens to tear their fellowship apart. All of these experiences would later inspire him to write his famous Middle-earth novels.” (Catalogue)

True detective. The complete third season
“In the heart of the Ozarks, the mystery surrounding a chilling crime deepens over three decades. Wayne Hays, a retired detective, who’s been tormented for 35 years by a case involving the 1980 disappearance of two children in West Finger, Arkansas. As the ageing Hays ruminates on the investigation with the producer of a true-crime documentary, details are revealed about the case and Hay’s haunted past.” (Catalogue)

Aladdin
“A street rat frees a genie from a lamp, granting all of his wishes and transforming himself into a charming prince to marry a beautiful princess. But soon, an evil sorcerer becomes fixated on securing the lamp for his own sinister purposes.” (Catalogue)

Kings. The complete series.
“A modern day, alternate-reality drama about a hero who rises to become the King of his nation, based on the biblical story of King David. King Silas Benjamin rules the kingdom of Gilboa with steely determination unmatched by any rival. During a tense battle with the neighbouring nation of Gath, David Shepherd, an idealistic young soldier from the countryside, heroically crosses over dangerous enemy lines and rescues a coveted prisoner of war, the son of the king.” Catalogue)

Wild Rose
“Rose-Lynn Harlan is bursting with raw talent, charisma, and cheek. Fresh out of jail and with two young kids, all she wants is to get out of Glasgow and make it as a country singer in Nashville. Her mum Marion has had a bellyful of Rose-Lynn’s Nashville nonsense. Forced to take responsibility, Rose-Lynn gets a cleaning job, only to find an unlikely champion in the middle-class lady of the house.” (Catalogue)

The haunting of Hill House.
“Flashing between past and present, a fractured family confronts haunting memories of their old home and the terrifying events that drove them from it.” (Catalogue)

Vera. Series eight.
“Vera and her team are drawn into four more compelling mysteries, including the body of a police officer discovered in an abattoir incinerator, a mysterious car crash, a suburban back-garden murder and the suspicious death of a teenage boy. Set around Newcastle and the stunning Northumberland countryside, Vera features complex and intriguing cases, atmospherically-shot landscapes and captivating performances, led by BAFTA and Golden Globe award-winning actress Brenda Blethyn as the unorthodox but brilliant DCI Vera Stanhope.” (Catalogue)