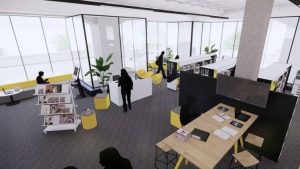 He Matapihi Molesworth Library, our brand new space in the National Library, has opened to the public! He Matapihi has a fantastic lending collection focussed on works from Aotearoa, including Māori and Māori local history, biography, Te Reo, art and architecture, natural history, general history and social comment–and, of course, fiction!

To celebrate this exciting new collection we thought we’d put together a list of some of our favourite local fiction, from recent releases such as Elizbeth Knox’s The Absolute Book and Jeff Murray’s cli-fi Melt to classics such as Robin Hyde’s visceral Passport to Hell. And with hundreds of fiction titles on the shelves at He Matapihi, there are plenty more to choose from. Enjoy!

Absolute book / Knox, Elizabeth
“Taryn Cornick believes that the past is behind her – her sister’s death by violence, and her own ill-concieved revenge. She has chosen to live a life more professional than personal. She has written a book about the things that threaten libraries – insects, damp, light, fire, carelessness and uncaring. The book is a success, but not all of the attention it brings her is good. There are questions about a fire in the library at Princes Gate, her grandparents’ house, and about an ancient scroll box known as the Firestarter . . .” (Adapted from Catalogue)

The imaginary lives of James Pōneke / Makereti, Tina
“The candle is low. Tomorrow I will see whether it is my friends or a ship homewards I meet. But first I must finish my story for you. My future, my descendant, my mokopuna. Listen? So begins the tale of James Poneke–orphaned son of a chief; ardent student of English; wide-eyed survivor. All the world’s a stage, especially when you’re a living exhibit. But anything can happen to a young New Zealander on the savage streets of Victorian London.” (Adapted from Catalogue)

Passport to hell : the story of James Douglas Stark, Bomber, Fifth Reinforcement, New Zealand Expeditionary Forces / Hyde, Robin
“Finding himself in early trouble with the law, the young James ‘Starkie’ tricked his way into a draft in 1914 by means of a subterfuge involving whisky and tea. Hyde portrays a man carousing in the brothels of Cairo and the estaminets of Flanders; attempting to shoot a sergeant through a lavatory door in a haze of absinthe, yet carrying his wounded captain back across No Man’s Land; a man recommended for the V.C. but also subject to nine court martials.” (Adapted from Catalogue)

A madness of sunshine / Singh, Nalini
“On the West Coast of New Zealand, Golden Cove is more than just a town. The adults are more than neighbors; the children, more than schoolmates. That is until one fateful summer–and several vanished bodies–shatters the trust holding Golden Cove together. All that’s left are whispers behind closed doors, broken friendships, and a silent agreement not to look back. But they can’t run from the past forever. It’s not long before the dark past collides with the haunting present and deadly secrets come to light.” (Adapted from Catalogue)

The cleaner / Cleave, Paul
“The city is sweating over the Christchurch Carver’s seven gruesome murders. But Joe, who works for the police, knows that one is a copycat murder, and he determines to find that killer and frame him for the other six deaths. Joe is in control of everything in his simple life, including both his day job at the police department and his . . . night work.” (Adapted from Catalogue)

Marlborough man / Carter, Alan
“Nick Chester is working as a sergeant for the Havelock police in the Marlborough Sound. If the river isn’t flooded, it’s paradise – unless you are also hiding from a ruthless man with a grudge, in which case, remote beauty has its own kind of danger. In the last couple of weeks, two local boys have vanished. Their bodies are found, but the Pied Piper is still at large. Marlborough Man is a gripping story about the hunter and the hunted, and about what happens when evil takes hold of a small town.” (Adapted from Catalogue)

Chappy / Grace, Patricia
“Uprooted from his European life and sent to New Zealand, 21-year-old Daniel pieces together the history of his Māori family. As his relatives revisit their past, Daniel learns of a love story between his Māori grandmother Oriwia and his Japanese grandfather Chappy. The more Daniel hears about his deceased grandfather, the more intriguing Chappy becomes. In this touching portrayal of family life, acclaimed writer Patricia Grace explores racial intolerance, cross-cultural conflicts and the universal desire to belong.” (Adapted from Catalogue)

Rotoroa / Head, Amy
“On tiny, isolated Rotoroa Island in the Hauraki Gulf is a treatment facility for alcoholic men. It’s here that three characters at very different points in their lives will find themselves gathered, each for reasons of their own. There is Katherine, known to history as Elsie K. Morton, famous journalist and author; Jim, a sleepless alcoholic; and Lorna, a teenage mother who joins the Salvation Army looking for a fresh start. As the stories of their lives are revealed, so too are their hopes and vulnerabilities.” (Adapted from the Catalogue)