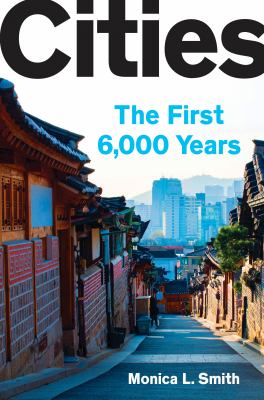 This selection has a wide variety of topics, from the abductions by Boko Haram, to AI, to aging, economics and from a New Zealand writer How to escape from prison.

Cities : the first 6,000 years / Smith, Monica L.
“Six thousand years ago, there were no cities on the planet. Today, more than half of the world’s population lives in urban areas, and that number is growing daily. Weaving together archeology, history, and contemporary observations, Monica Smith explains the rise of the first urban developments and their connection to today. Cities is an impassioned and learned account full of fascinating details of daily life in ancient urban centers, using archaeological perspectives to show that the aspects of cities we find most irresistible (and the most annoying) have been with us since the very beginnings of urbanism itself. She also proves the rise of cities was hardly inevitable, yet it was crucial to the eventual global dominance of our species–and that cities are here to stay.” (adapted from Catalogue)

Because internet : understanding the new rules of language / McCulloch, Gretchen
“A witty and linguistically informed look at how our digital world is transforming the English language. The internet isn’t the first technology to alter how we communicate, but it is making our language change faster and in more interesting ways than ever before… Internet linguist Gretchen McCulloch explores the deep forces that shape human language and influence the way we communicate with one another.” (adapted from Catalogue)

The clean money revolution : reinventing power, purpose, and capitalism / Solomon, Joel
“The Clean Money Revolution is part memoir of an inspiring thought leader’s journey from presidential campaigner to pioneering investor, part insider’s guide to the businesses remaking the world, and part manifesto for a new vision of profit, power, and purpose. Meet some of the people behind this massive shift, and discover the role you can play in the $50-trillion movement toward true prosperity. A must-read for investors, wealth advisors, aspiring entrepreneurs, and all who want their values and money to work together to transform the future.” (adapted from Catalogue)

Aging joyfully : a woman’s guide to optimal health, relationships and fulfillment for her 50s and beyond / Manly, Carla Marie
“How does a woman embrace her maturity with joy and strength when her body changes year to year? Psychologist Dr. Carla Marie Manly provides an important and meaningful window into womanhood for those approaching fifty and beyond. A must-read book for any woman approaching the age of fifty, Aging Joyfully touches the sensitive reality of the transition from a life filled with new beginnings to a graceful process filled with freedom, beauty, and joy.” (Catalogue)

The creativity code : how AI is learning to write, paint and think / Du Sautoy, Marcus
“As humans, we have an extraordinary ability to create works of art that elevate, expand and transform what it means to be alive. Yet in many other areas, new developments in AI are shaking up the status quo, as we find out how many of the tasks humans engage in can be done equally well, if not better, by machines. In The Creativity Code, Marcus du Sautoy examines the nature of creativity, as well as providing an essential guide into how algorithms work, and the mathematical rules underpinning them.” (adapted from Catalogue)

How to escape from prison / Wood, Paul
“As an 18-year-old, Dr Paul Wood was completely off the rails. He wasn’t coping with the impending death of his mother, he was dependent on drugs, and was an unemployed high-school dropout committing crimes to feed his habit. Two days after his mother died he lost control when his then drug dealer attempted to assault him. He then spent 11 years in some of New Zealand’s toughest prisons. But after a series of remarkable events, including a enlightening encounter with a criminal safe-cracker, Paul became the first person in New Zealand to progress through undergraduate studies to attain a bachelor’s and master’s degree in prison, and was the first person to begin a doctorate while still incarcerated. In this awe-inspiring book, Dr Paul Wood shares his life of crime, his time behind bars and his pathway to freedom.” (adapted from Catalogue)

The shadow war : inside Russia’s and China’s secret operations to defeat America / Sciutto, Jim
“Today’s warfare is conducted via hacking, disinformation campaigns, and advanced satellite weaponry, with business-people and lawyers, space engineers and computer scientists the combatants. CNN’s Chief National Security Correspondent reveals the invisible fronts of twenty-first century warfare and identifies the ongoing battles being waged. Intensive and disturbing, this invaluable and important work opens our eyes and makes clear that future war is here.” (adapted from Catalogue)

Beneath the tamarind tree : a story of courage, family, and the lost schoolgirls of Boko Haram / Sesay, Isha
“The kidnapping of 276 schoolgirls by Boko Haram in 2014 made global headlines. From poor Nigerian families, these girls had defied the odds and pursued an education, but daring to dream resulted in one of the most high-profile abductions in modern history. Award-winning CNN anchor Isha Sesay was on the front lines as the story broke, and when 21 of the girls were released, she was the only journalist to accompany them on their dangerous journey back home. In Beneath the Tamarind Tree, having developed unprecedented access to the Chibok girls, Sesay shares an intimate account of the night Boko Haram attacked, exclusive details about their years in captivity, and their daring tales of escape.” (adapted from Catalogue)

Breakfast with the centenarians : the art of ageing well / Mari, Daniela
“Notes: Translated from the Italian by Denise Muir.
Translation of: ‘A spasso con i centenari’. First published in Italy in 2017.
Includes bibliographical references and index.” (Catalogue)

The third pillar : the revival of community in a polarised world / Rajan, Raghuram
“Raghuram Rajan has an unparalleled vantage point onto the social and economic consequences of globalization and their ultimate effect on politics and society. In The Third Pillar he offers up a magnificent big-picture framework for understanding how three key forces – the economy, society, and the state – interact, why things begin to break down, and how we can find our way back to a more secure and stable plane.” (adapted from Catalogue)

By the sea : the therapeutic benefits of being in, on and by the water / Cracknell, Deborah
“Throughout history, people have always gravitated to live near the sea, it is part of the survival instinct. Environmental psychology is the study of how the natural environment makes us feel, think and behave, and scientists in this area are discovering the tangible benefits of breathing in the fresh sea air.” (adapted from Catalogue)

2040 : a handbook for the Regeneration based on the documentary 2040 : ideas, advice, inspiration and even some recipes for creating a brighter, better world / Gameau, Damon (movie available on Beamafilm)
“Like most of us, Damon Gameau has spent most of his adult years overwhelmed into inaction by the problem of climate change and its devastating effects on the planet. But when Damon became a father, he knew he couldn’t continue to look away. So he decided to do what he does best, and tell a story. The result is the era-defining documentary 2040. It shows us that climate change is a practical problem that can be tackled by each of us, one small step at a time, and that we can make a genuine difference – if we know what to do.” (adapted from Catalogue)