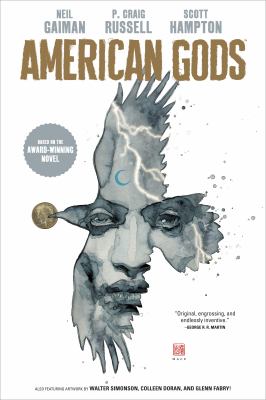 The fabulous, ubiquitous, library-loving Neil Gaiman has just announced that his beloved Sandman series of graphic novels has been green-lit as an eleven-part Netflix series.

Described by Warner Brothers as a massive deal, Sandman will be one of the most expensive TV series ever made. Fans will be mega-excited by the news and desperate to see the final product–alas, still a long way off. Several previous attempts to film Sandman have fallen by the wayside with one potential director describing the series as “unfilmable”.

Neil Gaiman is of course no stranger to film and TV adaptations of his work or indeed writing directly for either medium. Just a brief overview of his writing credits brings such notable films and programmes as Good Omens, American Gods, Coraline, Stardust and Mirrormask as well as several Doctor Who episodes and one episode of Babylon 5!

Sandman was originally–and famously–pitched as a Wild Cards story to George R. R. Martin, but was turned down due to Neil Gaiman’s relatively unknown status at the time. Undeterred, Gaiman went on to write the graphic novels that would become the legends that they are. Here for your delight and entertainment is just a small sample of the numerous, wonderful Neil Gaiman titles we have for you in our libraries. Enjoy!

The Sandman. Vol. 1, Preludes & nocturnes / Neil Gaiman, writer; Sam Kieth, Mike Dringenberg, Malcolm Jones III, artists.
Also available as an Ebook “In Preludes and Nocturnes, an occultist attempting to capture Death to bargain for eternal life traps her younger brother Dream instead. After his 70 year imprisonment and eventual escape, Dream, also known as Morpheus, goes on a quest for his lost objects of power. On his arduous journey Morpheus encounters Lucifer, John Constantine, and an all-powerful madman.” (Adapted from Syndetics summary.)

American gods [1]: shadows / story and words by Neil Gaiman; script and layouts by P. Craig Russell; art by Scott Hampton.
“This supernatural American road trip fantasy tells the story of a war between the ancient and modern gods. Shadow Moon gets out of jail only to discover his wife is dead. Defeated and broke, he meets the mysterious Mr. Wednesday, who employs him to serve as his bodyguard–thrusting Shadow into a deadly world where a god war is imminent.” (Adapted from Syndetics summary.)

Stardust / Neil Gaiman; original frontispiece and chapter-opening art by Charles Vess.
Also available as an eAudiobook “Among the wondrous, beautiful, and strange literary offspring conceived by Neil Gaiman is his magical 1997 fantasy novel, Stardust, remains a top favorite. An enchanting adult fairy tale about a young man who travels beyond the boundaries of his small village to find a fallen star and win the heart of the woman he loves–the basis for the hit motion picture.” (Adapted from Syndetics summary.)

Good omens / Terry Pratchett and Neil Gaiman.
Also available as an eAudiobook “There is a hint of Armageddon in the air. According to the Nice and Accurate Prophecies of Agnes Nutter, Witch, the world will end on a Saturday. Next Saturday, in fact. Except that a somewhat fussy angel and a fast-living demon are not particularly looking forward to the coming Rapture. So if they going to stop it from happening, they’ve got to find and kill the AntiChrist. There’s just one glitch: someone seems to have misplaced him.” (Adapted from Syndetics summary.)

Coraline / Neil Gaiman; illustrated by Chris Riddell.
Also available as an eBook “There is something strange about Coraline’s new home. It’s not the mist, or the cat that always seems to be watching her, nor the signs of danger that Miss Spink and Miss Forcible, her new neighbours, read in the tea leaves. It’s the other house – the one behind the old door in the drawing room. Another mother and father with black-button eyes and papery skin are waiting for Coraline to join them there. And they want her to stay with them. For ever.” (Adapted from Syndetics summary.)

Fragile things: short fictions and wonders / Neil Gaiman.
“Fragile Things is a sterling collection of exceptional tales from Neil Gaiman, multiple award-winning author. A uniquely imaginative creator of wonders whose unique storytelling genius has been acclaimed by a host of literary luminaries from Norman Mailer to Stephen King, Gaiman’s astonishing powers are on glorious displays in Fragile Things. Enter and be amazed!” (Adapted from Syndetics summary.)

Norse mythology / Neil Gaiman.
Also available as an eAudiobook “Neil Gaiman has long been inspired by ancient mythology in creating the fantastical realms of his fiction. In Norse Mythology, Gaiman stays true to the myths in envisioning the major Norse pantheon. The work culminates in Ragnarok, the twilight of the gods and rebirth of a new time and people.” (Adapted from Syndetics summary.)