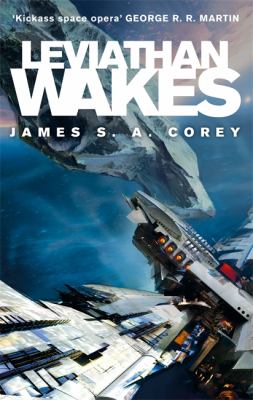 Stars are better off without us.”
― James S.A. Corey, Leviathan Wakes

Written by James S. A. Corey (the pen name used by collaborators Daniel Abraham and Ty Franck), the Expanse series has gained wide-ranging critical and popular success. The Expanse is set in the near future where humankind has colonized the solar system. One of the core themes is the vastness of the universe and the difficulties humans have in relating to its scale and alienness.

The eighth book in the series, Tiamat’s Wrath, was released last month, while the fourth series of the television adaptation is due to air later this year. With a total of four Hugo and three Saturn Award nominations between them, both the books and television series are definitely worth getting your teeth into. Enjoy!

Leviathan wakes / James S.A. Corey.
“Two hundred years after migrating into space, mankind is in turmoil. When a reluctant ship’s captain and washed-up detective find themselves involved in the case of a missing girl, what they discover brings our solar system to the brink of civil war, and exposes the greatest conspiracy in human history.” (Adapted from Syndetics summary)
For The Expanse Season One DVD availability click here.

Caliban’s war / James S.A. Corey.
“For someone who didn’t intend to wreck the solar system’s balance of power, Jim Holden did a pretty good job of it. While Earth and Mars have stopped shooting each other, the core alliance is shattered. Then, on one of Jupiter’s moons, a single super-soldier attacks, slaughtering soldiers indiscriminately. The race is on to discover whether this is the vanguard of an alien army, or if the danger lies closer to home.” (Adapted from Syndetics summary) Also available as an eAudiobook. For The Expanse Season Two DVD availability click here.

Abaddon’s Gate / James S. A. Corey.
“For generations, the solar system was humanity’s great frontier. Until now. The alien artefact working through its program under the clouds of Venus has emerged to build a massive structure: a gate that leads into a starless dark. Jim Holden and the crew of the Rocinante are part of a vast flotilla of ships going out to examine the artefact. But behind the scenes, a complex plot is unfolding. The greatest danger is the one they brought with them.” (Adapted from Syndetics summary)

Tiamat’s wrath / James S.A. Corey.
“Thirteen hundred gates have opened to solar systems around the galaxy. But as humanity builds its interstellar empire in the alien ruins, the mysteries and threats grow deeper. Elvi Okoye begins a desperate search to discover the nature of a genocide that happened before the first human beings existed, and to find weapons to fight a war against forces at the edge of the imaginable.” (Adapted from Syndetics summary)