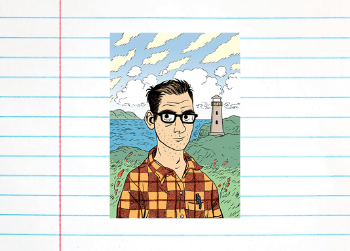 Next up on our special feature “5 minutes with…” we have Dylan Horrocks, a cartoonist best known for his graphic novel Hicksville and his scripts for the Batgirl comic book series. His works are published by the University of Auckland student magazine Craccum, Australia’s Fox Comics, the current affairs magazine New Zealand Listener from 1995 to 1997, the Canadian publishers Black Eye Comics and Drawn and Quarterly, and the American publishers Vertigo and Fantagraphics Books. He currently serialises new work online at Hicksville Comics.

Q: What first got you interested in comics?
A: My Dad has always been interested in comics, so I grew up in a house full of classics like Carl Barks’ Donald Duck as well as underground, European, and experimental comix. He also taught film, and watching the movies he’d project on our living room wall made me realise you could use visual narrative to do anything.

Q: What is your average day like?
A: I recently started teaching at the Victoria University of Wellington School of Design, so my days have become very busy. I’m often either in class or planning a class, or looking at students’ work. Otherwise, I’m probably at my studio writing or drawing. To relax, I watch old movies, read (often history), or play table-top role-playing games with friends.

Q: Can you tell us about a current or recent project you’ve worked on?
A: I’m working on a long non-fiction comic exploring the history and culture of Dungeons & Dragons. It’s about world-building – the urge to create an imaginary reality so detailed it begins to feel almost real – and how the emergence of fantasy role-playing games 45 years ago introduced a new way to inhabit these fictional worlds. There are other, shorter, comics I’ve drawn recently, but that’s the big one that’s occupying my time.

Q: Do you have any traditions or rituals that help you when you get to work?
A: One trick I learned a while back was to leave something unfinished at the end of each day. That way, when I sit down to start drawing or writing, I don’t have to stare at a blank page; I can just pick up where I left off – and before I know it I’m back in the groove.

Q: Who/what is your biggest influence or inspiration?
A: There are so many! Hergé’s Tintin is a huge influence on my work. But one New Zealand cartoonist who’s had a big impact on me for most of my life is Barry Linton, who died last year. He drew comics for more than 40 years, and left behind an extraordinary body of work. I hope someone gets it all back into print soon.

Q: What or who are your favourite NZ comics or creators?
A: Again, there are too many to mention even a fraction! Strips was a New Zealand comics magazine published between 1977 & 1987. Barry Linton (who I mentioned above) was one of its founding artists, but there were so many great cartoonists in there: Colin Wilson (the main driving force for the first few years), Joe Wylie, Kevin Jenkinson, Laurence Clark. There are earlier comics I’m fascinated by, too, including the work of Eric Resetar, Harry Bennett, and Jack Raeburn (all of who were publishing locally in the 1940s and 1950s). These days New Zealand has a large and diverse comics scene, with many cartoonists whose work I find inspiring. And every week I find someone new who’s putting out beautiful zines or webcomics. Each new discovery is like a treasure: an Instagram post or a page in a student’s sketchbook.

Q: What is your dream comic project?
A: I have a comic I daydream about now and then. Sometimes when I’m lying in bed half-asleep, or when I’m walking to work in the morning, I’ll think about it. So far, all there is to show is a few words in my notebook. It may never happen. But I love that stage in a project, when everything’s still open, possible, uncontained. When it really is still a dream….

Q: What are you excited to share with ComicFest attendees? Just a taster!
A: That depends how much I get done between now and then.

Q: If you were to enter our cosplay contest, who/what would you dress up as?
A: I reckon Toby Morris and I could do a mean Captain Haddock and Tintin (now, if we can just find the right dog to play Snowy…).