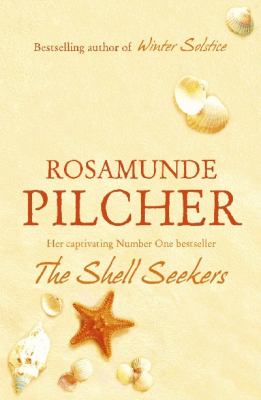 Rosamunde Pilcher had already written thirteen books before she became an international bestselling sensation with the Shell Seekers. Eventually the popular book was to be translated into forty languages, sit on best seller lists for an astonishing forty-nine weeks, sell over ten million copies and turn Rosamunde into an unlikely cult figure in Germany. She was credited for taking romantic fiction to a higher level injecting more realism and grittiness into the genre, and setting the benchmark for romantic fiction novelists. She retired from writing in 2000 after completing her final work Winter Solstice stating that she “wanted to stop while she was writing well”. She will be sorely missed by her legions of fans.

The shell seekers / Rosamunde Pilcher.
“Artist’s daughter Penelope Keeling can look back on a full and varied life: a Bohemian childhood in London and Cornwall, an unhappy wartime marriage, and the one man she truly loved. She has brought up three children – and learned to accept them as they are. Yet she is far too energetic and independent to settle sweetly into pensioned-off old-age. And when she discovers that her most treasured possession, her father’s painting, The Shell Seekers, is now worth a small fortune, it is Penelope who must make the decisions that will determine whether her family can continue to survive as a family, or be split apart.” (Adapted from Syndetics summary)

Winter solstice / Rosamunde Pilcher.
“Elfrida Phipps loves her new life in the pretty Hampshire village. She has a tiny cottage, her faithful dog Horace and the friendship of the neighbouring Blundells – particularly Oscar – to ensure that her days include companionship as well as independence. But an unforeseen tragedy upsets Elfrida’s tranquillity: Oscar’s wife and daughter are killed in a terrible car crash. Oscar and Elfrida take refuge in a rambling house in Scotland which becomes a magnet for various waifs and strays who converge upon it, including an unhappy teenage girl.” (Adapted from Syndetics summary)