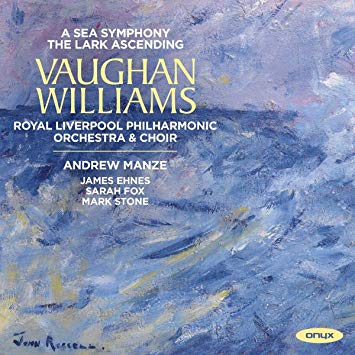 This week’s new classical CDs include these three albums featuring vocals: A Sea Symphony, which features text from Walt Whitman’s ‘Leaves of Grass’, sung by Sarah Fox and Mark Stone; Howard Goodall’s treatment of the Passion; and a second compilation of Vivaldi arias by Cecilia Bartoli. A Sea Symphony & The Lark Ascending, Vaughan Williams. Performed by the Royal Liverpool Philharmonic Orchestra & Choir.
“Vaughan Williams’s first symphony A Sea Symphony displays an epic self-confidence in handling large orchestral forces and setting words to music. Walt Whitman’s words had been set by Holst and Harty and inspired orchestral works by Delius. The American poet provided a rich vein of inspiration to Vaughan Williams. The romance The Lark Ascending, originally for violin and piano, was orchestrated in 1920 and has become one of the composer’s best-loved works” (cover). Invictus: A Passion, Howard Goodall. Performed by Christ Church Cathedral Choir and others.
“Christ Church Cathedral Choir and Stephen Darlington join forces with Soloists from The Sixteen and a stellar group of instrumentalists on this premiere recording. Persecution of the innocent, malevolent authority exerting itself against ideas that threaten and challenge, the power of a peaceful, loving humility in the face of tyranny, the facing-down of fear; all hold profound universal resonance for people of many faiths and those of none. Such is the power of the Passion story and in his new work, Invictus: A Passion, multi-award-winning composer Howard Goodall has found a route directly to people’s hearts, telling the story afresh through his choice of thought-provoking texts combined with heart-rending yet inspiring music” (amazon.com).