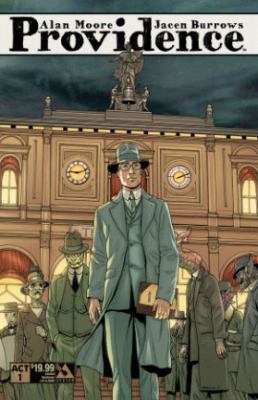 “Ocean is more ancient than the mountains, and freighted with the memories and the dreams of Time.” –  H. P. Lovecraft

Howard Phillips Lovecraft struggled to get his work published and died in poverty,  a virtually unknown author. Since his death in 1937 his influence and reputation as one of the greatest writers of horror and strange tales of unspeakable terror has only grown and grown.  In this  graphic novel showcase we are looking at the rich, strange, frightening and wonderful worlds that H.P. Lovecraft created and how they have  inspired authors and artists from the graphic novel community. Enjoy

Providence. Act 1 / story, Alan Moore ; art, Jacen Burrows.
“Alan Moore’s quintessential horror series has set the standard for a terrifying examination of the works of H.P. Lovecraft. It is being universally hailed as one of Moore’s most realized works in which the master scribe has controlled every iota of the story, art, and presentation. The result has been a masterpiece like no other, unparalleled in tone and content, and a true must have addition to his essential works in the field.”  ( Adapted from Syndetics summary)

Neonomicon / Alan Moore, story & script ; Jacen Burrows, art. The courtyard / Alan Moore, story ; Jacen Burrows, art.
“Brears and Lamper, two young and cocky FBI agents, investigate a fresh series of ritual murders somehow tied to the final undercover assignment of Aldo Sax -the once golden boy of the Bureau, now a convicted killer and inmate of a maximum security prison. From their interrogation of Sax (where he spoke exclusively in inhuman tongues) to a related drug raid on a seedy rock club rife with arcane symbols and otherworldly lyrics, they suspect that they are on the trail of something awful… ” (Adapted from Syndetics summary)

Weird detective / script by Fred Van Lente ; art by Guiu Villanova.
“The streets of New York have been plagued by a pattern of crimes too weird and bizarre for the average detective. Lurking in the evidence are shadows of loathsome horrors from beyond space and time, seeking to usher in the unimaginable evil of the Old Ones. And the only man capable of fighting against the unspeakable terrors isn’t a man at all. Detective Sebastian Green is one of them it takes a monster to catch a monster.” (Adapted from Syndetics summary)

The wake / Scott Snyder, writer ; Sean Murphy, artist ; Matt Hollingsworth, colorist.
“When Marine Biologist Lee Archer is approached by the Department of Homeland Security for help with a new threat, she declines, but quickly realizes they won’t take no for an answer. Soon she is plunging to the depths of the Arctic Circle to a secret, underwater oilrig filled with roughnecks and scientists on the brink of an incredible discovery. But when things go horribly wrong, this scientific safe haven will turn into a house of horrors at the bottom of the ocean!” (Adapted from Syndetics summary)

Hellboy : strange places / Mike Mignola.
“This 416-page volume covers Hellboy’s adventures from 1998 to 2005, reprinting Conqueror Worm , Strange Places , Into the Silent Sea , and “The Right Hand of Doom, “Box Full of Evil,” and “Being Human” from The Right Hand of Doom and B.P.R.D. Being Human .Hellboy loses faith in the Bureau for Paranormal Research and Defense when they strap a bomb to one of his fellow not-quite-human agents. He gets answers about his destiny, like it or not, in over 300 pages of comics mostly drawn by Mignola, featuring award-winning guests Gary Gianni and Richard Corben.”  (Adapted from Syndetics summary)

B.P.R.D. : Hell on Earth [2] : gods and monsters / story by Mike Mignola and John Arcudi ; art, Tyler Crook, Guy Davis.
“Between tracking down the followers of a prescient teen pursued by crab-like, subterranean beasts, and dealing with a redneck priest who preaches by way of human mutilation to fanatical hillbillies, the B.P.R.D. certainly have their hands full. Can a fractured B.P.R.D. wage a winnable war or are they fighting a battle of attrition?” (Syndetics summary)

Abe Sapien [1] : the drowning / story by Mike Mignola ; art by Jason Shawn Alexander.
“A century ago, paranormal investigator Edward Gray fought and destroyed a powerful warlock off the coast of the island of Saint-Sbastien. In the early 1980s, the B.P.R.D.’s newest agent was sent to retrieve the warlock’s remains. But Abe Sapien is ill prepared for the dark forces that block his way. ” (Adapted from Syndetics summary)

Saga of the Swamp Thing. Book one / written by Alan Moore ; art by Stephen Bissette…[et al.]
” Writer Alan Moore’s seminal horror series is now published in hardcover for the very first time . Created by a freak accident, Swamp Thing believed he was once scientist Alec Holland – but when he discoveres his true nature, it shatters his universe and sends him on a path of discovery and adventure. Featuring the art of Stephen Bissette and John Totleben, this groundbreaking work features mind-blowing, genre-defying stories starring the rich, complex character that Neil Gaiman called “The No. 1 New Classic Monster.” (Adapted from Syndetics summary)