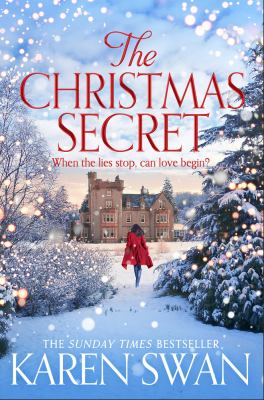 Christmas spirit at the library! Immerse yourself in new and classic titles from a variety of authors from different genres who use Christmas to showcase their storytelling talents. Whether it’s Ali Smith’s Winter, musing on how we present ourselves to family, or Agatha Christie setting Poirot and Miss Marple baffling cases for Christmas there is great reading material for the holidays.

Some authors regularly return to the celebration theme with series set around Christmas, Debbie Macomber, who brings a new feel good Christmas gift every year and Anne Perry who delivers Victorian mystery novellas adorned with all the trimmings. James Patterson and John Grisham’s fast paced seasonal titles play foil to the romantic holiday offerings from Jenny Colgan and Karen Swan.

Twelve days of Christmas : a novel / Debbie Macomber.Twelve Days of Christmas
“Friendly and bubbly, Julia Padden likes nearly everyone, but her standoffish neighbor, Cain Maddox, presents a particular challenge. She’s going to break through Cain’s Scrooge-like exterior the only way she knows how, by killing him with kindness. To track her progress, Julia starts a blog called The Twelve Days of Christmas. Her first attempts to humanize Cain are far from successful. Meanwhile, Julie’s blog becomes an online sensation, as an astonishing number of people start following her adventures.” (Syndetics summary)

The Christmas secret / Karen Swan.
“Set on the beautiful island of Islay in Scotland, The Christmas Secret is a gripping and heartwarming novel. Alex Hyde is the leaders’ leader. An executive coach par excellence. Lochlan Farquhar, CEO of Kentallen Distilleries, is a maverick, an enigma and a renegade, and Alex needs to get inside his head before he brings the company to its knees. It should be business as usual. She can do this in her sleep. Only, when she gets to the remote island of Islay, with the winter snows falling, Alex finds herself out of her comfort zone.” (Syndetics summary)

Winter / Ali Smith.Winter: A Novel
“Here comes Winter. Bleak. Frosty wind, earth as iron, water as stone, so the old song goes. The shortest days, the longest nights. The trees are bare and shivering. The summer’s leaves? Dead litter.
The world shrinks; the sap sinks.
But winter makes things visible. And if there’s ice, there’ll be fire. In this second novel in her acclaimed Seasonal cycle, the follow-up to her sensational Autumn, Smith’s shape-shifting quartet of novels casts a merry eye over a bleak post-truth era with a story rooted in history, memory and warmth, its taproot deep in the evergreens: art, love, laughter. It’s the season that teaches us survival. ” (Syndetics summary)

A Christmas revelation : a novel / Anne Perry.
“Christmas is coming and the streets of London are full of festive cheer. As young Worm returns to his home at the Portpool Lane clinic, he encounters the most beautiful woman he has ever seen and, spellbound, he follows her until she is dragged away by two evil-looking men. Convinced that she is in grave danger, Worm begs Squeaky Robinson to help him track her down. But Elouise is embroiled with dangerous criminals who want information that only she can tell. They will stop at nothing to get what they want and, with Christmas day fast approaching, Worm and Squeaky must conjure up a daring plan to help Elouise before it is too late.” (Syndetics summary)

The adventure of the Christmas pudding : and a selection of entrees / Agatha Christie.
“Agatha Christie’s seasonal Poirot and Marple short story collection…first came a sinister warning to Poirot not to eat any plum pudding… then the discovery of a corpse in a chest… next, an overheard quarrel that led to murder… the strange case of the dead man who altered his eating habits… and the puzzle of the victim who dreamt his own suicide. What links these five baffling cases? The little grey cells of Monsieur Hercule Poirot!” (Syndetics summary)

Merry Christmas, Alex Cross / James Patterson.
“It’s Christmas Eve and Detective Alex Cross has been called out to catch someone who’s robbing his church’s poor box. That mission behind him, Alex returns home to celebrate with Bree, Nana, and his children. The tree decorating is barely underway before his phone rings again–a horrific hostage situation is quickly spiraling out of control. Away from his own family on the most precious of days, Alex calls upon every ounce of his training, creativity, and daring to save another family. Alex risks everything–and he may not make it back alive on this most sacred of family days.” (Syndetics summary)

Christmas at the Cornish cafe / Phillipa Ashley.
“Return to the Cornish Cafe in this gorgeous festive romance – the perfect book to curl up with this Christmas. Christmas will be slightly less turbulent than summer, won’t it? Demi certainly hopes so. A storm is brewing in more ways than one. As surprises unfold and truths are uncovered, can Demi and Cal finally open up to each other about their feelings?” (Syndetics summary)

Skipping Christmas / John Grisham.Skipping Christmas
“Imagine a year without the chaos and frenzy that has become part of our holiday tradition. This is just what Luther and Nora Krank have in mind when they plan to skip Christmas and embark on a Caribbean cruise instead. But as this weary couple is about to discover it’s not as easy as that.” (Syndetics summary)

The Darling Dahlias and the poinsettia puzzle / Susan Wittig Albert.
“It’s Christmas, 1934, and the citizens of Darling, Alabama, are unwrapping a big package of Christmas puzzles. Mildred Kilgore and Earlynne Biddle are planning to open a bakery on the square–if they can come up with the right recipes. Charlie Dickens faces two of the biggest puzzles of his career as an investigative reporter, and one of them involves his wife. Cute little Cupcake’s talent as a singer and dancer makes her a tempting target for an unscrupulous exploiter; Lizzy must enlist the Dahlias to protect her, while she herself is confronted by a romantic puzzle. And Sheriff Norris is forced to reopen a puzzling mystery that the town thought was solved and follow a string of clues that lead to a deadly situation at the nearby prison farm.” (Syndetics summary)

An island Christmas / Jenny Colgan.
“Christmas on the remote Scottish island of Mure is bleak, stark – and incredibly beautiful. It’s a time for hunkering down, getting cosy in front of whisky barrel wood fires, and enjoying a dram with the people you love – unless, of course, you’re accidentally pregnant to your ex-boss, and don’t know how to tell him. In what should be the season of peace and goodwill on earth, will Joel think Flora is a bearer of glad tidings?” (Syndetics summary)