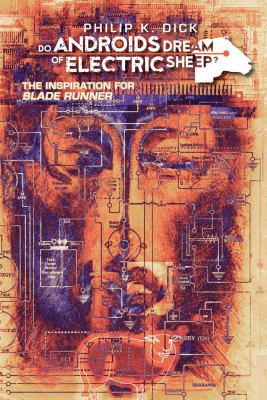 Philip K. Dick, the visionary, prophetic science fiction writer, would have been 90 on the 16th of December this year. His ability to foresee the trends, themes, technologies and politics that would go on to shape our world was truly uncanny. His works inspired hordes of writers, artists, film-makers and even scientists. And of course his creations didn’t exist in a vacuum–he was in turn influenced by writers such as Raymond Chandler, Franz Kafka and John Sladek.

To commemorate his remarkable life and work we have created our own showcase of books, graphic novels and DVDs from our science fiction, graphic novel and audio visual departments.

Below is a very small selection of the authors who have been inspired by Philip K. Dick’s works, or who were of inspiration to him. To see more of our picks just pop into the library or check out our special Overdrive selections!

Finches of Mars / Brian Aldiss.
“Set on the Red Planet, this book follows the stories of a group of colonists and the problems they have in setting up a new society. Life can be sustained by technology but new life will not prosper – the woman on the planet only ever give birth to stillborn children.” (Adapted from Syndetics summary)

Oryx and Crake / Margaret Atwood.
“The narrator is Snowman (a man once known as Jimmy), self-named though not self-created. As the story begins, he’s sleeping in a tree, wearing a dirty old bedsheet, mourning the loss of his beautiful and beloved Oryx and his best friend Crake, and slowly starving to death. Earlier, Snowman’s life was one of comparative privilege. Crake and Jimmy live with all the other smart, rich people in the Compounds – gated company towns owned by biotech corporations. (Ordinary folks are kept outside the gates in the chaotic ‘pleeblands’.) Meanwhile, beautiful Oryx, raised as a child prostitute in Southeast Asia, finds her way to the West and meets Crake and Jimmy, setting up an inevitable love triangle.” (Adapted from Syndetics summary)

The drowned world / J.G. Ballard ; introduction by Martin Amis.
“The Drowned World imagines a terrifying world in which global warming has melted the ice caps and primordial jungles have overrun a tropical London. Set during the year 2145, this novel follows biologist Dr. Robert Kearns and his team of scientists as they confront a cityscape in which nature is on the rampage and giant lizards, dragonflies, and insects fiercely compete for domination.” (Adapted from Syndetics summary)

Best short stories = Die schönsten Erzählungen / Franz Kafka ; edited and translated by Stanley Appelbaum.
“Franz Kafka (1883-1924). Considered one of the greatest modern writers, Kafka’s work brilliantly explores the anxiety, futility and complexity of modern life. The stories in this volume are The Metamorphosis (thought by many critics to be Kafka’s most perfect work), The Judgment, In the Penal Colony, A Country Doctor and A Report to an Academy.” (Adapted from Syndetics summary)

Altered carbon / Richard K. Morgan.
“In the 25th century, humankind has spread throughout the galaxy, monitored by the watchful eye of the U.N. While divisions in race, religion, and class still exist, advances in technology have redefined life itself–a person’s consciousness can be easily downloaded into a new body, making death nearly obsolete. Ex-U.N. envoy Takeshi Kovacs has been killed before, but his last death was particularly brutal. Resleeved into a new body in Bay City (formerly San Francisco), Kovacs is thrown into a shady, far-reaching conspiracy that is vicious even by the standards of a society that buys and sells human existence.” (Adapted from Syndetics summary)

Cat’s cradle / Kurt Vonnegut
“A young writer decides to interview the children of a scientist primarily responsible for the creation of the atomic bomb. This is an apocalyptic tale of the planet’s ultimate fate, featuring a cast of unlikely heroes. A satirical commentary on modern man and his madness.” (Adapted from Syndetics summary)