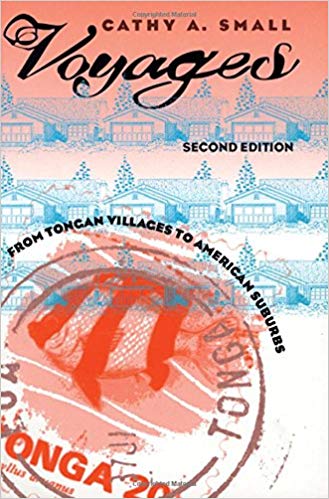 Introducing Flint & Steel, published by Maxim Institute. Maxim Institute is an independent research and public policy think tank, working to promote the dignity of every person in New Zealand. These two volumes are on sustainability, and on community: On cultivating community. & On sustainability and what we leave behind.

Freeman’s : power
“From the voices of protestors to the encroachment of a new fascism, everywhere we look power is revealed. This thought-provoking issue of the acclaimed literary annual Freeman’s explores who gets to say what matters in a time of social upheaval.” (Syndetics summary)

Voyages : from Tongan villages to American suburbs / Cathy A. Small.
“In Voyages, Cathy A. Small offers a view of the changes in migration, globalization, and ethnographic fieldwork over three decades. The second edition adds fresh descriptions and narratives in three new chapters based on two more visits to Tonga and California in 2010. The author (whose role after thirty years of fieldwork is both ethnographer and family member) reintroduces the reader to four sisters in the same family-two who migrated to the United States and two who remained in Tonga-and reveals what has unfolded in their lives in the fifteen years since the first edition was written.” (Adapted from Syndetics summary)

Have you eaten grandma? / Brandreth, Gyles Daubeney
“Our language is changing, literacy levels are dwindling and our grasp of grammar is at crisis point, so you wouldn’t be alone in thinking WTF! But do not despair, Have You Eaten Grandma? is here: Gyles Brandreth’s definitive (and hilarious) guide to punctuation, spelling, and good English for the twenty-first century.” (Adapted from Syndetics summary)

How to Tell Fate from Destiny : And Other Skillful Word Distinctions
“If you have trouble distinguishing the verbs imitate and emulate, the relative pronouns that and which, or the adjectives pliant, pliable, and supple, never fear– How to Tell Fate from Destiny is here to help! With more than 500 headwords, the book is replete with advice on how to differentiate commonly confused words and steer clear of verbal trouble.” (Adapted from Syndetics summary)

The Future of Capitalism : Facing the New Anxieties
“Deep new rifts are tearing apart the fabric of the United States and other Western societies: thriving cities versus rural counties, the highly skilled elite versus the less educated, wealthy versus developing countries. As these divides deepen, we have lost the sense of ethical obligation to others that was crucial to the rise of post-war social democracy. So far these rifts have been answered only by the revivalist ideologies of populism and socialism, leading to the seismic upheavals of Trump, Brexit, and the return of the far-right in Germany. We have heard many critiques of capitalism but no one has laid out a realistic way to fix it, until now.” (Adapted from Syndetics summary)

Seriously Curious : The Facts and Figures That Turn Our World Upside Down
“…brings together the very best explainers and charts, written and created by top journalists to help us understand such brain-bending conundrums as why Swedes overpay their taxes, why America still allows child marriage, and what the link is between avocados and crime. The Economist explains and its online sister, the Daily Chart, are the two most popular blogs on The Economist’s website. Together, these online giants provide answers to the kinds of questions, quirky and serious, that may be puzzling anyone interested in the world around them.” (Adapted from Syndetics summary)

The crypto book : how to invest safely in bitcoin and other cryptocurrencies / Siam Kidd.
“Blockchain technology and the cryptocurrencies it enables are being described by some people as the biggest thing since the internet, but very few people understand it, or the opportunities it brings. Enter this down-to-earth guide to understanding what cryptocurrencies are, why it matters, and how to make money from them.” (Adapted from Syndetics summary)

I think, therefore I draw : understanding philosophy through cartoons / Thomas Cathcart and Daniel Klein.
“Covering topics as diverse as religion, gender, knowledge, morality, and the meaning of life (or the lack thereof), I Think, Therefore I Draw gives a thorough introduction to all of the major debates in philosophy through history and the present. And since they explain with the help of a selection of some of the smartest cartoonists working today, you’ll breeze through these weighty topics as you guffaw and slap your knee.” (Adapted from Syndetics summary)

Globalization and its discontents revisited : anti-globalization in the era of Trump / Joseph E. Stiglitz.
“In this hugely controversial book, the most recent winner of the Nobel Prize for Economics argues that though globalization should be a powerful force for good, it has been badly mishandled by the West (especially its lead institutions, the World Bank and the IMF), and that the anti-globalizing protestors have much to say that we should listen to. Coming from a figure of Stiglitz’s background and authority, this is an explosive message which will change the way we regard modern global politics.” (Syndetics summary)