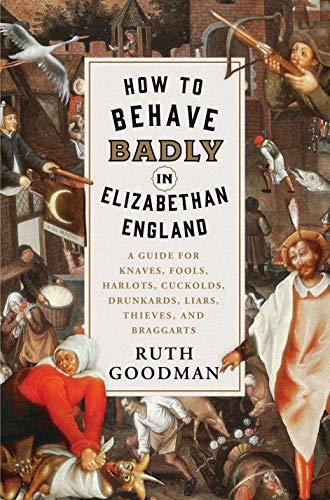 This month’s history picks have a healthy collection of U.S Presidents, starting early with Joseph Ellis’s American Dialogue: The Founders and Us taking a look at the founding fathers of the country. Skipping ahead to the present day, we’ve got the last two Commanders in Chief with Jeanne Marie Laskas’s To Obama, and Greg Miller’s The Apprentice. If you need something a little more lowbrow than the high office of President, maybe try Ruth Goodman’s How to Behave Badly in Elizabethan England, or take a left turn into a different kind of society and have a look at Our Woman in Havana by Sarah Rainsford, covering life in modern Cuba.

American dialogue : the founders and us / Joseph J. Ellis.
“What would the founders think? We live in a divided America that is currently incapable of sustained argument and is feeling unsure of its destiny. Joseph J. Ellis explores anew four of our most prominent founders, in each instance searching for patterns and principles that bring the lamp of experience to our contemporary dilemmas. Ellis reminds us that the founders’ greatest legacy lies not in providing political answers but in helping us find a better way to frame the question.” (Abridged from Syndetics summary)

To Obama : with love, joy, anger, and hope / Jeanne Marie Laskas.
“Every evening for eight years, at his request, President Obama was given ten handpicked letters written by ordinary American citizens from his Office of Presidential Correspondence. He was the first president to interact daily with constituent mail and to archive it in its entirety. In To Obama, Jeanne Marie Laskas interviews Obama, the letter writers themselves, and the White House staff who sifted through the powerful, moving, and incredibly intimate narrative of America during the Obama years.” (Abridged from Syndetics summary)

The origins of the Anglo-Saxons : decoding the ancestry of the English / Jean Manco.
“What do we really know of English ancestry? Combining results from cutting-edge DNA technology with new research from archaeology and linguistics, The Origins of the Anglo-Saxons reveals the adventurous journey undertaken by some of our ancestors long before a word of English was spoken. Starting with the deeper origins of the Germani and how they fit into the greater family of Indo-European speakers and ending with the language of Shakespeare, taken to the first British colony in America, this chronicle takes a wider scope than previous histories.” (Abridged from Syndetics summary)

How to behave badly in Elizabethan England : a guide for knaves, fools, harlots, cuckolds, drunkards, liars, thieves, and braggarts / Ruth Goodman.
“Every age and social strata has its bad eggs, rule-breakers, and nose-thumbers. As acclaimed popular historian Ruth Goodman shows in her madcap chronicle, Elizabethan England was particularly rank with troublemakers, from snooty needlers who took aim with a cutting “thee,” to lowbrow drunkards with revolting table manners. Goodman draws on advice manuals, court cases, and sermons to offer this colorfully crude portrait of offenses most foul.” (Abridged from Syndetics summary)

The allies : Roosevelt, Churchill, Stalin, and the unlikely alliance that won World War II / Winston Groom.
“By the end of World War II, 59 nations were arrayed against the axis powers, but three great Allied leaders–Franklin Roosevelt, Winston Churchill, and Joseph Stalin–had emerged to control the war in Europe and the Pacific. Vastly different in upbringing and political beliefs, they were not always in agreement or on good terms. But in the end, these three men presided over a new world order. Best-selling historian Winston Groom returns to tell one of the biggest stories of the 20th century.” (Abridged from Syndetics summary)

The Oxford Illustrated history of the Holy Land / edited by Robert G. Hoyland, H.G.M. Williamson.
“The Oxford Illustrated History of the Holy Land covers the 3,000 years which saw the rise of Judaism, Christianity, and Islam and relates the familiar stories of the sacred texts with the fruits of modern scholarship. Beginning with the origins of the people who became the Israel of the Bible, it follows the course of the ensuing millennia down to the time when the Ottoman Empire succumbed to British and French rule at the end of the First World War.” (Abridged from Syndetics summary)

Our woman in Havana : reporting Castro’s Cuba / Sarah Rainsford.
“From inside this tightly controlled one-party state, Sarah Rainsford, the BBC’s ‘woman in Havana’ for three years, reports on lives shaped by Fidel Castro’s giant social experiment and how the nation feels as the six-decade rule of the Castros comes to an end. Seeking a window into pre-revolutionary Cuba, she searches for the ghosts of Graham Greene’s Havana and the paths walked by other visiting writers (chiefly Ruby Hart Phillips, who covered Cuba from 1937-1961 for the New York Times).” (Abridged from Syndetics summary)

Carrington : an honourable man / Christopher Lee.
“Lord Carrington was Margaret Thatcher’s Foreign Secretary when the Argentinians invaded the Falklands in 1982. Absent in Israel on the eve of the invasion, he promptly resigned since it was, he said, a point of honour. The descendant of a famous banking family, Carrington served as a minister in every Conservative government from Churchill to Thatcher. In this full biography, authorised but not read by the subject, author of This Sceptred Isle Christopher Lee offers a fascinating portrait of a Tory icon whose career is a window into post-war British politics and life as a politician and diplomat.” (Abridged from Syndetics summary)

The apprentice : Trump, Russia and the subversion of American democracy / Greg Miller.
“From two-time Pulitzer Prize-winning Washington Post national security reporter Greg Miller, the truth about Vladimir Putin’s covert attempt to destroy Hillary Clinton and help Donald Trump win the presidency, its possible connections to the Trump campaign, Robert Mueller’s ensuing investigation of the president and those close to him, and the mystery of Trump’s steadfast allegiance to Putin.” (Abridged from Syndetics summary)